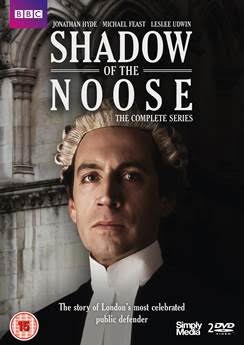 Simply Media is delighted to announce the DVD release of BBC’s Shadow of the Noose: The Complete Series. First shown on BBC Two in 1989, this highly regarded eight-part drama series, with an outstanding all-star cast, will be available to own for the first time on any home video format from 20th February 2017.

Directed by BAFTA-winner Matthew Robinson (Byker Grove / Eastenders) and Sebastian Graham Jones (Cadfael), Shadow of the Noose tells the true story of the career and personal life of “The Great Defender” Sir Edward Marshall Hall. He was London’s most celebrated barrister and the first world-famous legal celebrity, whose gripping cases consistently made news headlines and drew crowds in to the public gallery of the Old Bailey during the late Victorian era and early Edwardian era.

Jonathan Hyde (Titanic) brings Marshall Hall’s style and personality to life on screen in an outstanding performance. Marshall Hall was known for his theatrics as he argued his cases with gusto and determination, keeping the Court audience on the edge of their seat, particularly at a time when a guilty verdict meant facing the rope.

Throughout the series, which is based on true cases, Marshall Hall tackles a variety of seemingly impossible and controversial cases, and defends a colourful array of characters. Whether championing a lowly German prostitute accused of murdering a client, dissecting an ugly libel battle surrounding accusations of homosexuality within an aristocratic family, or defending the accused in the infamous Camden Town Murder…it’s all in a day’s work for Sir Edward Marshall Hall! But when a maid is accused of killing her illegitimate baby Marshall Hall is forced to face his own personal demons when it brings back unhappy memories of his first marriage…