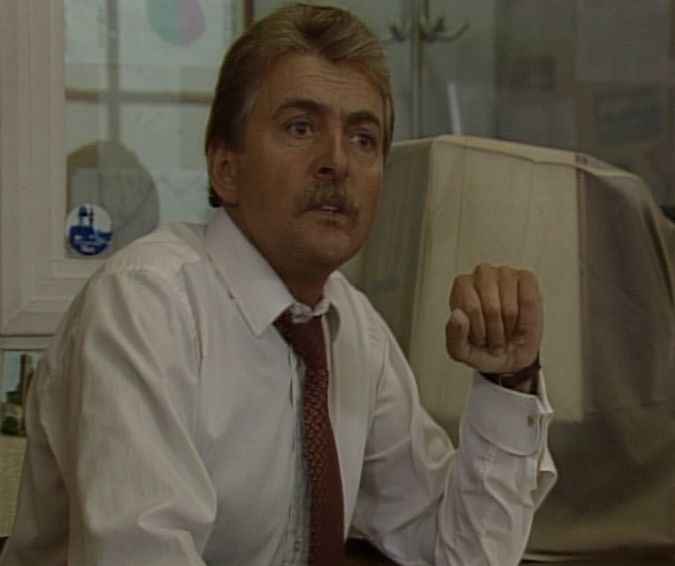 Light Duties, the first episode from the reformatted 25 minute incarnation of The Bill, aired on the 19th July 1988.  It gave us our first chance to see Jim Carver (Mark Wingett) in plainclothes (and demonstrates he’s something of a landlubber – Jim feels seasick after a trip down the Thames).

It’s not a pleasure cruise though, Jim and Ted Roach (Tony Scannell) are interested in a body fished out of the river.  But anywhere that Ted goes trouble’s not too far behind – he finds himself tangling with DS Dougan (Andy Secombe) and DI Corrington (Anthony Dutton), both of whom claim the body for their own.  Ted glowers at them in his trademark fashion.

Scripted by series creator Geoff McQueen, Light Duties demonstrates that even though the running time of each episode had halved, there wouldn’t be any problems keeping multiple plotlines on the go as per the previous series.  A collapsed man in the street (along with his dog) and concerns over the health of Sgt Penny (Roger Leach) are both developed (Penny’s the one on light duties following a recent incident where he was shot).

Some of the troops aren’t too impressed about serving under a female officer.  Given this was 1988 and both Juliet Bravo and The Gentle Touch had aired some years ago, this seems slightly surprising.  Clearly Sun Hill was a very conservative area.  Frazer’s first appearance, in plainclothes, is a treat.  Poor PC Stamp (Graham Cole) shooed her away from the incident with the collapsed man in a rather heavy-handed way, not realising who she was.  The audience didn’t know at the time either, but I’ve a feeling that the penny dropped with them long before it registered with Stamp.

Ted’s continuing to grizzle.  With the DI’s room vacant, he feels that he’s the man for the job – but obviously nobody else does.  So Ted does what he does best in times of crisis, grabs his bottle of whisky and heads off to drown his sorrows.  The toilets are an obvious place for a spot of peace and quiet – presumably why Tom’s there, chugging down a handful of pills in order to soothe his shattered nerves.  Ted offers him a swig from his bottle (“might help”) which Tom accepts.  Pills and alcohol, not a good mixture ….

These episodes of The Bill tended to be self-contained but, as we’ll see, Tom’s issues carried over into the next episode – The Three Wise Monkeys.  Understandable, since it would have been a little unbelievable to have neatly wrapped up his problems within twenty five minutes.

Ted’s blood pressure continues to take a pounding when he learns that Burnside (“bent Burnside!”) is a contender for the vacant post of DI.  Although the pre-watershed placing of the series now means that his oaths (“naff off, Bob”) lack a certain something.

Rather coincidently, there’s a connection between the old man who collapsed and Ted’s dead body.  This allows him to score something of a coup, although I’ve a feeling that any kudos will be short-lived.  Ted operates on such a short fuse that you can guarantee he’ll soon put somebody’s nose out of joint and be back to square one.

A number of characters didn’t make the transition from the 50 minute format to the twice weekly 25 minute series, but I’m glad that Ted Roach did.  Sun Hill wouldn’t have been the same without him, although it’s plain that one day he’s going to go too far.  Luckily, that won’t be for a while yet.

2 thoughts on “The Bill – Light Duties”