Skip to content
HomeDoctor Who – City of Death. Episode Four

Both the Doctor and Scarlioni have one last encounter with the Countess, although Scarlioni’s is rather more deadly. The Doctor once again switches from playful joshing to a more serious persona in a (double) heartbeat.  Tom’s in full pop-eyed form here.  Whereas the Count once again gets to show his true features, which comes as something of a surprise to his wife ….

This is another of those odd moments. The Egyptian scroll depicting a splinter of Scaroth had white skin with a green blobby face – was this a touch of artistic licence, or are all Scaroth’s splinters like that?  It would make undressing a little easier, as surely otherwise the Countess would have noticed that her husband was not as other men.  There’s the possibility that they shared separate bedrooms, but the way that the Countess went on the hunt for the Count at the end of the first episode implies otherwise.

I also have another burning question – how did Scaroth manage to make face masks throughout time and why did he always use the same face?  I’d have assumed he’d have wanted a touch of variety.

John Cleese and Eleanor Bron pop up briefly and are excellent. But everybody knows that.

There’s a chance to luxuriate with Ian Scoones’ modelwork again as the story reaches its conclusion. Unlike the cut-price effects on, say, Nightmare of Eden, there’s no scrimping here – film, instead of videotape, was used and the difference is quality is startlingly obvious.

For once, Duggan’s propensity for hitting everything that moves turns out to be a good thing. It’s another gag moment, but it works – although the following brief scene (as Scarlioni returns to 1979) has always seemed to be something of a bodge.  Possibly the clock was ticking ever closer to ten o’clock, which meant that something had to be cobbled together.  What we have – a brief shot of Scaroth and Hermann, an even briefer explosion and then an abrupt jump cut to the Doctor and Romana saying farewell to Duggan – is a little disorientating. 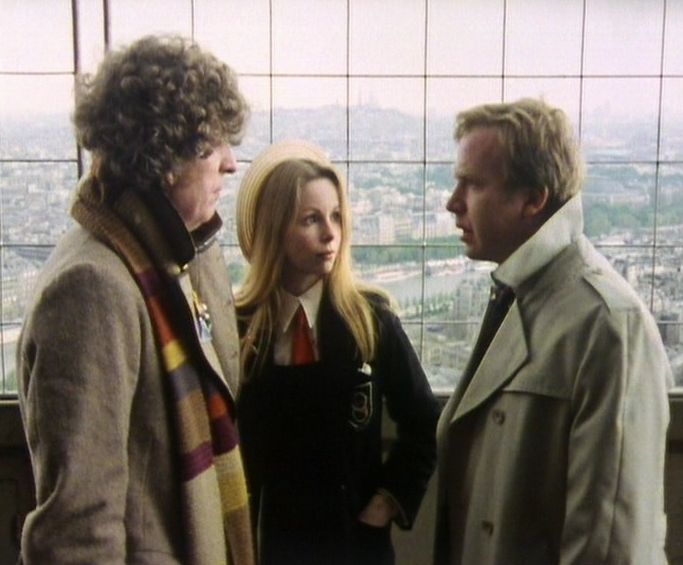