Skip to content
HomeOut of the Blue – Series One, Episode Three 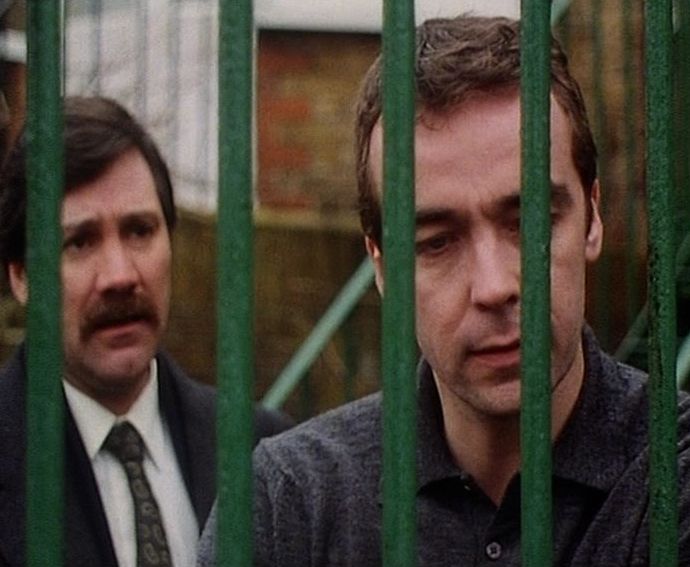 When Ron’s daughter is discovered with a computer disc containing violent pornography, the team spring into action to track the perpetrator down …

Bruce is puzzled by this brave new computer world (no doubt a section of the audience would have been just as perplexed as he was) but luckily there’s a young schoolboy on hand to explain the world of networks, notice boards, DOS and floppy discs.  We must be pretty much pre-internet for most people, since the images were distributed on 3.5″ discs, which helps to date the programme.

John Hannah’s been boiling away nicely for the last few episodes but now Franky’s been suspended Hannah takes the opportunity to ramp up the intensity level several notches. Franky blames Bruce for shopping him, but he’s blameless (it was Franky’s wife, Lorraine, who informed DI Temple).  When Franky later learns the truth, does he apologise to Bruce? Nope. Which provides more evidence that Franky’s a charmless, self-centered, self-pitying sort of chap. Possibly he’s a good thief-taker, but his social skills need more than a spot of work.

Poor Warren’s lack of success with the opposite sex leads the others, notably Ron and Marty, to offer him some well-meaning words of advice. Bruce is more caustic, he opines that Warren’s problem is due to the fact he dresses off the peg (at the Salvation Army!)

The episode also features a back-street strip club which employs disabled performers. Warren, at the club in surveillance mode, is appalled. The camera coyly doesn’t show us the stripper, but we get a good insight into Warren’s distressed state of mind by the way the camera starts to weave and lose focus.

The mystery of who killed Gary isn’t much of a mystery after all, but it’s still a strong enough episode with a pre-dinnerladies Andrew Dunn making the most of his limited screentime.

4 thoughts on “Out of the Blue – Series One, Episode Three”