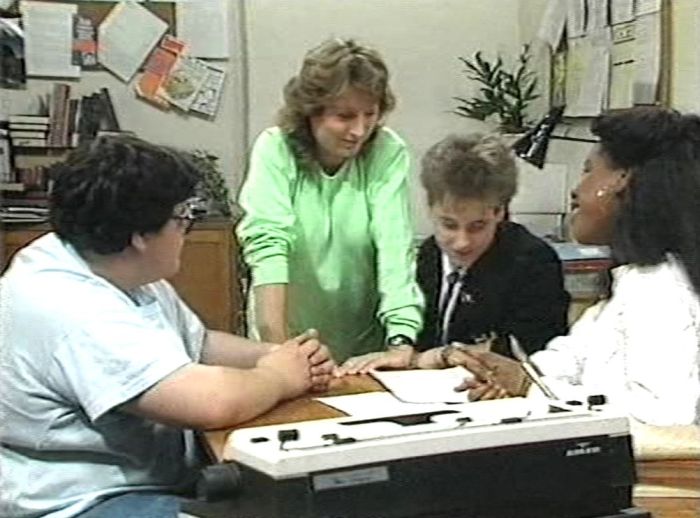 Continuity is a bit of a bugbear with me, so it slightly rankles that at the start of today’s episode Vince plugs a kettle into a socket down in his reconstructed den.  Yet a few episodes ago he told Gonch that making tea would be impossible since they’d need to plug a kettle in elsewhere and the trailing wire would bound to be seen.

Freddie, Cheryl and Roland are attempting to pull all the grievances expressed by the pupils into a single document.  That it’s still somewhat chaotic (complaints about the colour of the school diary is still high on the list) doesn’t suggest that their organisational skills are very good.  It’s also a telling moment that they’re quite happy for Miss Partridge to take their notes and type them up.  Can none of them type?  And whilst Miss Partridge obviously has their best interests at heart, she’s still “one of them” ….

We’re shortly heading into a direct confrontation between the staff and the pupils over the way the school is run.  It’s a pity though that these threads haven’t been developed more over the course of this year.  Compared, say, to SAG (from series two) it does feel somewhat undercooked.  The fact that Harriet has enjoyed a good deal more screentime is an example of strange priorities.

Louise is turning into something of a stroppy madam, skipping Mr Bronson’s French class because she can’t be bothered to attend.  It’s a pity then that she decides to lounge about in the corridor in plain sight, right where Mr Bronson can find her.

Banksie remains in a foul food, convinced that Mrs Reagan has scuppered his chances of success at Hazelrigg school although there’s no evidence for this.  His first assignment – tidying up their art room – isn’t terribly exciting, but exactly what did he expect to be doing on his first day?

After popping back to Grange Hill to vent his spleen, he returns to Hazelrigg for his afternoon stint.  His next task – posting some letters – doesn’t seem terribly exciting either, but Lucy and Perry (Jimmy Carr) tell him that they have to come as well and Banksie is required to ride to the post office in a wheelchair.  They’re lying of course, but this brief trip out is the first stage in Banksie’s development.  And playing snooker with Lucy (and the fact he gets beaten by her) only serves to strengthen his bond with the school

Donkey Watch.  Harriet’s not well and Helen is beside herself with worry.  Will Harriet live or die?  This is edge of the seat stuff, especially when an anxious Helen turns to the bible for comfort.

Ant’s presence throughout series ten has been somewhat superfluous.  Apart from his relationship with Georgina (which never seemed to go anywhere) his only other major contribution comes here – after he fouls Ziggy in a football match and instantly turns into a villain.  It’s such a feeble tackle that it’s hard to imagine how Ziggy managed to sustain so great an injury that he had to be stretchered off.  Maybe for once we can say that Ant’s been a little hard done by.

Gonch has worked out a way to gain revenge over Trevor – the Grange Hill ghost of course.  We’ve been here before (and we will again).  Will Trevor be stupid enough to fall for such an obvious trick?  Hmm …..