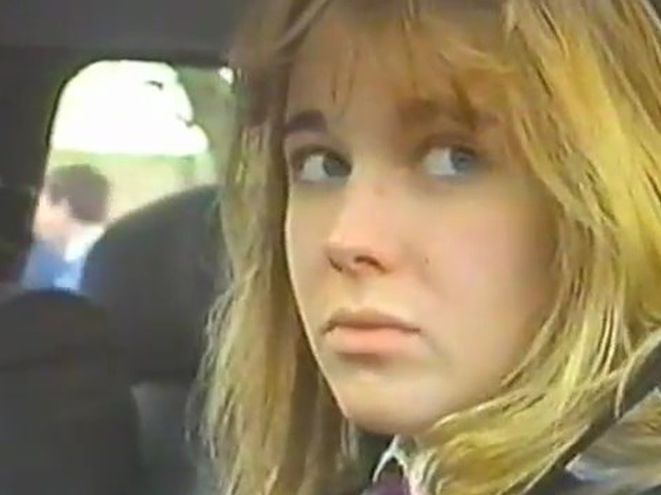 The atmosphere of dissent continues.  Huddled secret meetings are the order of the day whilst Mr Bronson, observing the front entrance from on high, looks down impassively.  Julia’s role as a mole is once again restated as she’s delivered to school by her father who informs Mr Bronson that “she knows what’s expected of her”.  Julia doesn’t say anything, she just stares out of the car window ….

Danny might have previously been disinclined to get involved, but he can’t help himself – he’s convinced they’re in desperate need of organising.  It’s a little embarrassing that nobody else considered what would happen if the teachers decided to cut the power – how can you broadcast your demands without electricity?  Danny suggests they set up another base in the sixth form building (which has an independent power source that can’t be switched off).  He also reveals Julia’s true role to the others, but if they feed her disinformation then she can be an asset not a hindrance.

But before the fun and games of the sit-in, school life goes on as normal.  An informal meeting between Miss Partridge and a group of sixth formers helps to restate the lessons that Banksie’s learnt whilst he’s been at Hazelrigg Road,

A nice incidental detail is provided when we see a relaxed Mr Bronson swigging from his coffee mug.  It’s garishly decorated with two parrots (last year he suffered an off-screen attack from his sister’s pet bird, so it could be that they – along with steam engines – are something of a passion with him).

Julie, Fay and Jackie (slightly grizzling about traditional gender roles) are busy making the sandwiches for the sit-in.  But when the topic turns to the catering for Jackie’s wedding, she breaks down in tears.  Nerves or are doubts beginning to creep up on her?  It’s notable that she tells the others that Zammo’s really keen to get married (she clearly hasn’t been looking at his face recently as he’s been wearing a hangdog expression for some time).  As for her, now that she’s engaged she believes that their union is binding and irreversible.  It’s also very interesting that she suggests it could be worse – at least she likes Zammo.  Likes, not loves.

Meanwhile Zammo and Banksie are at the supermarket, stocking up on sit-in supplies.  Uniting in a common cause seems to have healed the rift between them, but the main reason for this scene becomes obvious when Banksie runs into one of his brother’s friends.  He’s only a few years older than them but he’s saddled with several children (and another on the way).  His wife – in the few seconds we see her – seems less than sympathetic, so the general picture created by this brief thumbnail sketch implies that marriage = loss of freedom.  Exactly what the shaky Zammo doesn’t want to hear.

Cheryl, Freddie, Julie and Ziggy have commandeered the radio room and broadcast to the school, requesting that their fellow pupils occupy the building.  They pop on a record – Sonic Boom Boy by Westworld – which then becomes the soundtrack for a score of enthusiastic extras who use everything they can find (chairs, blackboards) to barricade themselves into the classrooms.

Mrs McClusky is calmness personified.  She’s happy to accede to one of their demands – an interview – if it takes place in her office and they abandon the sit-in.  She also suggests disconnecting the speakers might be less disruptive than cutting the power.  And she’s not too concerned that her fellow teachers are unable to get into the classrooms – since at present they know exactly where the problematic pupils are.

I do like the fact that Hollo’s following Mr Griffiths about, meaning that every time the caretaker disconnects a speaker, it’s immediately reconnected!  At this point, pop fans, The Future’s So Bright, I Gotta Wear Shades by Timbuk 3 is playing.

It’s also entertaining that even when the pupils outmanoeuvre them, it’s Mr Bronson and the recently arrived Mr Glover who resort to running about like headless chickens.  Mrs McClusky continues to be very laid back.

Mrs McClusky’s plan for restoring order is simple but effective.  Ring the bell for afternoon lessons and the chanting pupils outside are drawn back to the school hypnotically.  Slightly hard to believe, but there’s possibly a point being made here about the manipulation of the masses (since they were just as easily swayed by the sloganeering of the rebels, the bulk of the school community – like the electorate at large – can be capricious and unpredictable).

This leaves the others, barricaded in the sixth form common room, in something of a bind.  It’s pointless broadcasting messages of democratic freedom when there’s nobody around to listen to them ….