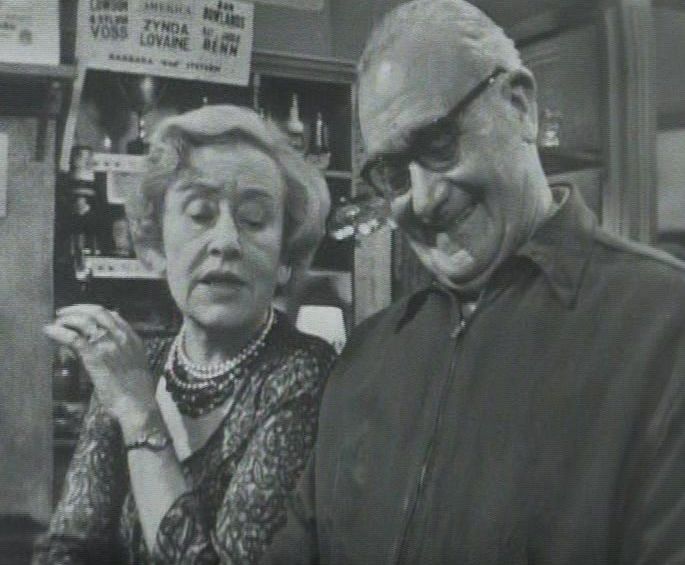 Poor Florrie hasn’t been in charge of the corner shop for more than a few hours and she’s already in trouble with the police.  Although you do have to say that the undercover officers (a man and a woman) were a bit naughty – acting as agent provocateurs, they asked for a packet of fire-lighters after 7.00 pm, knowing full well that such a sale would be illegal.  If Florrie had been a little more experienced maybe she would have picked up that the pair were acting in a somewhat shifty manner (I think it was the man’s moustache that did it for me).

What really upsets Florrie is the prospect that she might be fined and see her name in the newspapers.  The thought of such public humiliation causes her obvious pain.

More of the regulars are introduced in this episode.  I absolutely love Jack Walker (Arthur Leslie), the long-suffering husband of Annie.  Although this era of the series has a strong matriarchal streak, which reflects Tony Warren’s own experiences when younger, most of the men are more than simply fall-guys.  Jack may find himself somewhat under the thumb of the dominant Annie, but there’s always more of a dash of humour and lightness in Leslie’s performance.

Ken continues to fret that Coronation Street is no place for a girl like Susan.  More than once he tries to dissuade her from visiting the Rovers, but eventually she has her own way (another sign of female dominance?).  She’s made a good impression with Ken’s parents (Frank seems especially taken with her) although Ken himself is still incredibly tense (ashamed of his humble surroundings, no doubt).

Susan’s borrowed her father’s car to visit Ken.  It would have been impractical in such a small studio to show it, but the illusion is neatly created when we hear, off screen, a number of small urchins playing with the horn.  They also scratch the bonnet and shove nails into the tyres – making it plain that Coronation Street is very much at the wrong end of town.

Ena continues to dominate every scene she’s in.  She’s incensed when Florrie refuses to serve her with some ham, but even better is to come when Christine Hardman (Christine Hargreaves) pops into the corner shop to give Ena a piece of her mind.  One of Ena’s defining character traits – she’s a woman who speaks her mind, irrespective of the hurt it might cause others – is made plain here.

Christine’s mother has suffered a nervous breakdown, but Ena seems to have displayed little sympathy (on the contrary, we can assume that she’s relished talking about it).  Ena uses the phrase “pots for rags” to describe Christine’s mother (presumably anybody who gives away good pots to the rag and bone man in exchange for rags must be a little loopy).  There’s little else you can do but just stand back and admire Ena in full flight.

Over at the Rovers we meet Harry Hewitt (Ivan Beavis) who seems rather cheerful, despite the fact that his daughter’s stuck in an orphanage.  We later learn that Harry’s wife died the year before and since he was unable to cope with his daughter, Lucille, the poor girl was placed in care.

Also at the Rovers, the triumvirate of Ena, Martha Longhurst (Lynne Carrol) and Minnie Caldwell (Margot Bryant) take up their positions in the snug.  It’s noticeable that Minnie doesn’t speak a single word – all she does is nod vigorously as the other two make various points.  A pity, but she’ll make up for it later with a score of deliciously vague bon mots.

We’re denied that here, but Ena and Martha do have this wonderful, oft quoted, exchange.

Ena: You know sometimes I think I’m just about ready to go off down to that cemetery, but if I had my way I’d just like to go like me mother did.
Martha: Eee, that were a beautiful ending.
Ena: Oh, lovely. She just sat up, broke wind and died.

What can you say? Simply wonderful.

Elsie and Linda spend a quiet evening in (although this illusion is somewhat spoilt by the sound of someone coughing elsewhere in the studio). Their scenes help to put a little meat on the bones of both their characters – especially Elsie, who doesn’t appear to have adjusted to the fact that the war is over. Back then, with a GI on her arm, she was someone. Now she’s just another faded woman with ever decreasing horizons.

Both decide to go for a drink at the Rovers Return, where they find Ivan waiting …..