Skip to content
HomeDoctor Who – The Daleks. Episode One – The Dead Planet 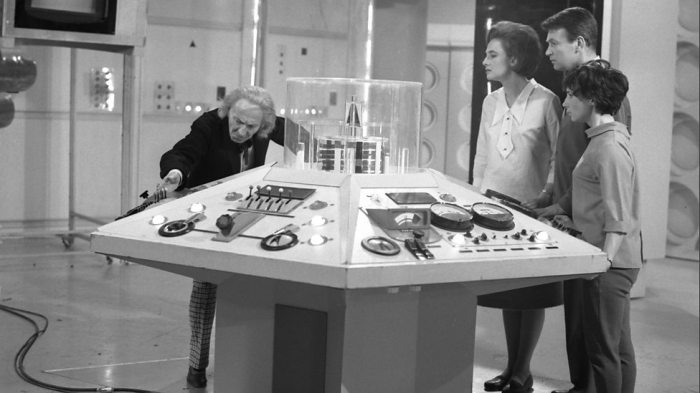 The Daleks was the second William Hartnell story I watched, a mere eight years after the Five Faces screening of An Unearthly Child.  The year was 1989 and BBC Video had released a double-pack of The Daleks on VHS.  With every existing episode now accessible at the touch of a button it’s difficult to describe just how exciting it was to own this story – something I could watch again and again (and those early Doctor Who VHS’s did get many, many plays!)

As part of the generation who became fans in the period before the programme was widely available, I’d grown up with a distinct picture of many stories via the Target novels and articles in DWM.  The Daleks had also featured in Jeremy Bentham’s lavish 1986 book Doctor Who – The Early Years.  I’d pore over the numerous photographs and Ray Cusick’s designs for hours, wondering whether I’d ever get the chance to see these episodes.

David Whitaker’s novelisation is a must read and equally recommended is the talking book read by William Russell.  Although it compresses the seven episodes down to about a hundred pages (the first few chapters are basically an alternative version of An Unearthly Child – lots of fog, Barnes Common, lorries, everlasting matches, etc) nothing vital from the teleplay is omitted and for me the book was instrumental in painting a vivid picture of the story.

But before that, my first exposure to this tale was via the Peter Cushing movie Doctor Who and the Daleks.  BBC Genome confirms my memory that it received an airing on my birthday (the 10th of June 1978) and although the film strips away much of the subtlety of the orignal, the vivid comic-strip nature of the film was very much what this seven-year old wanted.

Therefore, watching The Daleks for the first time I was approaching it with a good deal of baggage – the same way I initially viewed every story from the first three Doctors.  I knew how the stories should look (the images were crystal clear from the Target books) and there was sometimes disappointment when things didn’t match up.  No doubt I’ll touch on this again, probably when we get to Day of the Daleks, but over the years I’ve come to love the series for what it was and not what I’d expected it to be.

One thing that’s always slightly irked me about The Dead Planet is the way the Doctor never even considers that the planet might be radioactive.  There are not-so subtle hints (“The heat must have been indescribable. Look at this soil here. Look at it. It’s all turned to sand and ashes.”)  I do love the way that the TARDIS radiation meter only flashes that it’s dangerous once everybody leaves the console room (and presumably stops flashing as soon as they re-enter!).  Is this an early example of the TARDIS’ sentience and had it therefore decided to kill them all?!

BARBARA: Ian, where are we?
IAN: I don’t know.
BARBARA: Well why doesn’t he take us back?
IAN: I’m not sure that he can.
BARBARA: What, ever?
IAN: I hate it as much as you. I’m just as afraid. But what can we do?

This is a far cry from 21st Century Who, especially the RTD incarnation, where the TARDIS at times seemed to be similar to Starfleet – only the brightest and best are allowed.  Contrast this to the original series – the likes of Ian, Barbara and Tegan were abducted against their will, Vicki, Victoria and Nyssa were orphans taken in by the Doctor since they had nowhere else to go, Leela and Adric were stowaways, etc.

At this point in the series there’s a compelling sense of dramatic tension as Ian and Barbara are positioned against the Doctor.  The Doctor is now firmly established as an explorer with an unboundless sense of scientific curiosity.  He wants to explore, but Ian is unhappy (if anything happens to the Doctor, who will operate the ship?)   This is of no concern to the Doctor, he has little interest in Ian and Barbara’s opinions and is determined to get his own way.  This plot-line could only really happen right at the start of the series, very soon we’ll see that everybody will be keen to explore any new location and no thought is ever given to how dangerous it might be.

Terry Nation.  The series owes him a great debt (without this serial the programme might very well have come to an end after just thirteen episodes) although there’s no doubt that he collected this debt – these seven scripts, written in a great rush, were instrumental in making him a very rich man.  Often mocked by fandom (sometimes affectionately, sometimes not so) for his reliance on rehashing his own scripts, The Daleks is where it all began.  If you want to see it again then there’s always Planet of the Daleks in 1973 (was this a homage by Nation, paying tribute to the series’ 10th anniversary, or simply another lazy plundering of past glories?  With Nation, it’s not always easy to tell).

The cliches start here though, especially when the four decide to split up to explore the strange city.  The division is distinctly odd though – Barbara goes one way and the other three head off in the opposite direction.  This doesn’t seem plausible at all – there’s no way that Ian would allow Barbara to go off by herself (but it had to happen, so we could have that cliffhanger).

Mention must be made of Raymond Cusick’s design work and Tristram Cary’s music.  Cusick, along with Barry Newbery, would define the early years of Doctor Who and it’s staggering to see what they achieved with so little money.  In this episode we have the petrified forest, impressive model-shots of the city and our first brief glimpse at the city itself.  Yes, the painted backdrops do look a little obvious (although they would have been less so on the lower resolution televisions in 1963) but it’s the small details that impress – such as the cameras that focus in on the increasingly distraught Barbara.

Cary’s series of cues were impressive enough to be used in three more stories (although it’s also possible to argue that this was a cost-saving measure).  But I’d like to think they were used again because they were so good – they certainly help to create a sense of unease and tension which climaxes as Barbara is menaced by a threatening sink plunger.