For most of the twentieth century, Pathe News produced newsreels and documentaries.  These were primarily designed for British consumption, although the topics covered ranged all over the world.  Pathe really came into their own during WW2 – since the BBC had closed their television service for the duration, Pathe ensured that the public could see (as well as hear) exactly what was going on.

The Pathe style is instantly recognisable.  A clipped, authoritative narrative style, allied to striking images (often mute and overlaid with music).  As their newsreels covered multiple events, there was never much of an opportunity to provide more than a brief soundbite of any given story, but it’s still notable just how vivid these short films can be.

As the decades wore on and television news became slicker, Pathe’s star began to dim a little.  It’s therefore interesting to compare the first three DVDs re-released here – covering 1948, 1958 and 1968 – to see if their style changed over time.  Later discs utilise BBC reports but are equally as fascinating. 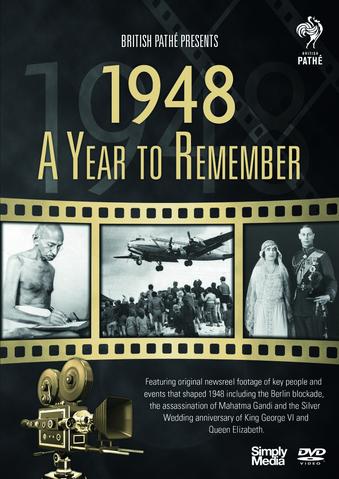 Three main areas are covered on this disc.  World affairs, domestic British affairs and sports and entertainment.  Ghandi’s funeral is a noticeable highlight from the first section – not only for the sheer scale of the event, vividly captured by the Pathe cameras, but also for the narration, which carries a certain weight and gravitas.

The British section offers rich pickings, since it mostly covers events which might not be world shattering but are rich in historical detail. The highly sedate New Years Party at the Chelsea Arts Ball is a window into another world, whilst the sight of the King and Queen touring the Ideal Homes Exhibition is a treat. Not least for the many practical crafts on display – Britain in 1948 was still a nation in the grip of austerity, so although there are consumer goods aplenty, there’s also a demonstration of make and mend skills such as basket weaving. A hand loom is also shown and we’re told what to do if wool can’t be found (simply raise silkworms instead). It truly was another time.

Royal affairs feature heavily, with a strong dollop of due deference shown. Chief attractions are the King and Queen’s Silver Jubilee and the birth of Prince Charles.

The last fifteen minutes revolves around entertainment and sport, with the likes of Joe Louis, Ronald Coleman and Danny Kaye giving brief interviews. As with all the Pathe features, time was always tight, so these soundbite moments are rarely terribly revealing (the extreme deference of the interviewers is sometimes a problem too) but having said that, the Danny Kaye piece is quite memorable. 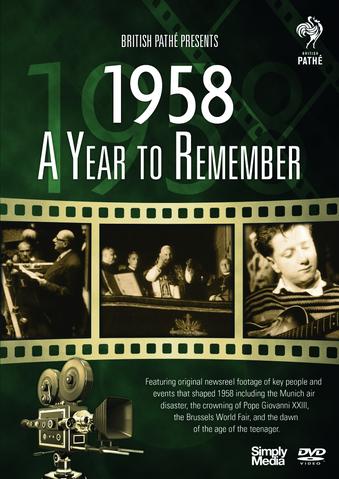 There’s plenty of interest across the 1958 volume. I was especially taken with the report from Expo 58 – also known as the Brussels World Fair – which served as a shop window for various counties (including Britain) to show off their technological wares. An attempt to foster harmony acrose diverse nations (although the narrator can’t help but make a slight dig against the Russians) it’s a reminder of a more optimistic age. Technological innovation – British, naturally – is something of a running theme throughout the year.

The Munich Air Crash – which saw twenty one people, including seven members of the Manchester United football team, perish – is probably the most famous piece of footage on the disc. But the sight of the stark, twisted wreckage of the areoplane, flecked by snow, still has a considerable impact. Also affecting is the way that the camera moves across a still photograph of the team, with the narrator naming each player and then informing us whether they were killed or injured.

Domestic British affairs are well covered again – with the racial tensions in Notting Hill and the rise of the teenager both standing out. The optimism of the Windrush arrivals (covered in the 1948 volume) had plainly disappated, leaving a bitterly divided community. The footage of the hip and happening teenagers (it’s all coffee bars, jazz and jiving for them) is another of those wonderful time-capsule moments which makes these newsreels so enjoyable to revisit. 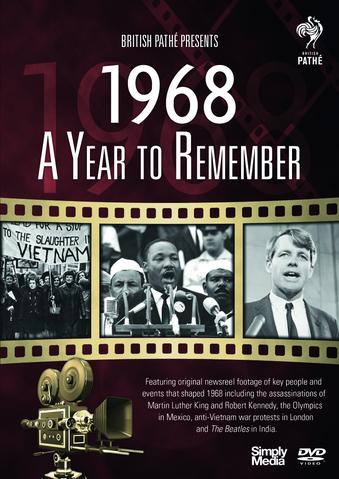 Bob Danvers-Walker, Pathe News Commentator between 1940 and 1970, introduces this disc (which suggests it was assembled at a different time from the previous two discussed). Although we’ve nearly reached the end of the swinging sixties, the Pathe style (authoritative narration, jaunty backing music) remained unchanged. This makes for a slightly odd viewing experience, but one that’s even richer in cultural nuggets. Although it’s strange that most of the material is still in black and white.

The clash between the old (the Pathe narrators) and the new (practically everything else) is very marked. There’s something slightly incongruous about seeing the bright young things of the film world – “James Fox and delicious friend” – cavorting at the Playboy Club or people lounging about on PVC furniture, whilst Bob Danvers-Walker sets the scene for us.

But elsewhere the narrators have weightier material to get their teeth into (such as the assassinations of Martin Luther King and Robert Kennedy). The death of F1 ace Jim Clark is another sobering moment. The Pathe cameras were on hand to cover the race and the sight of his teamate, Graham Hill, staring at Clark’s wrecked car is something which lingers in the memory.

With Pathe having discontinued their newsreel service in 1970, the post 1970 years mainly utilises BBC reports which naturally results in a very different feel.  A modern narrator – Kenneth Kendall – is used to place the various clips in context (he essentially replaces the studio newsreaders).

For some of the longer clips, Kendall’s narration is augmented by footage of the original BBC reporters such as Brian Barron, Martin Bell, Sally Hardcastle and Larry Harris.  This is a welcome touch as it helps to anchor the stories in the era they were produced.  On-screen captions of the reporter’s names are also appreciated, as although some faces are familiar, others are less so.

As ever, the stories range from the serious (Bush Wars in Rhodesa) to the ridiculously trivial (Oklahoma’s annual cow chip throwing contest).  Some things – such as the theft of Charlie Chaplin’s body from his Swiss grave – were new to me.  Proof that you can always learn something.

Since these BBC reports have never been as widely disseminated as the classic Pathe newsreels, I found this disc to be especially fascinating.  What’s especially interesting is how these filmed reports aren’t too dissimilar from the Pathe style (although the musical soundtrack has gone).  For obvious reasons, film lacks immediacy (there would always be a transmisson delay, since the recording had to be shipped home in order to prepare it for broadcast).  It was when television news switched to videotape more regularly for live outside broadcasts that things changed ….

Another familiar newsreader – Michael Burke – takes over from Kenneth Kendall as the narrator of the 1988 disc.  There’s some extraordinary footage here – most notably the grenade and gun attack carried out at the funeral of the three IRA men who had been shot dead in Gibraltar by the SAS.

Entertainment (Comic Relief launches its first Red Nose Day, Ian Botham follows in Hannibal’s footsteps for another charity walk) rubs shoulders with more serious fare (Hurricane Gilbert causes devastation in the Caribbean, famine continues to cause strife in Ethiopia).  Royal stories – something of a running theme across all the discs – are well to the fore as well.

Originally assembled in the early nineties, these programmes have been released and repackaged by several different companies over the years.  Simply have brought many back into print, with these five DVDs being the most recent.  They’re obviously ideal birthday presents (it’s always interesting to see what happened in the year you were born) but they also stand up well as absorbing social documents in their own right.  The way that the reporting style changes over the course of the decades – from the clipped, deferential Pathe approach to the slightly more informal BBC coverage – is one reason why, but the front-line nature of the reportage (capturing events as they happen) is often highly compelling too.  And the variety of topics, from the trivial to the serious, ensures that there’s something of interest for everybody.