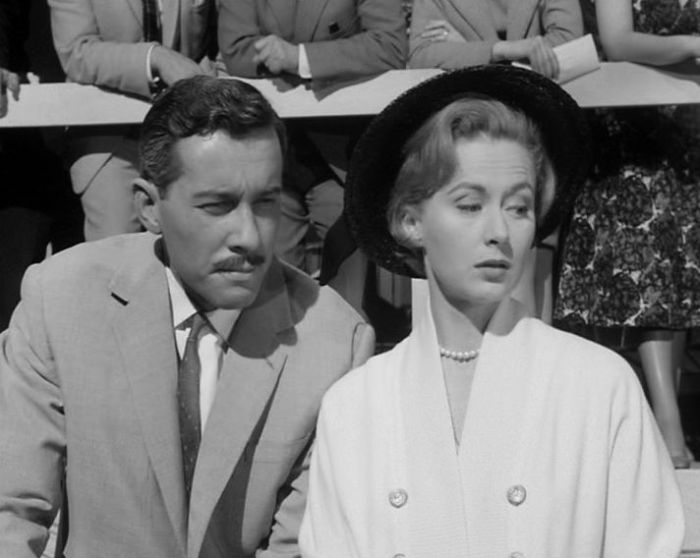 Simon, this week in Argentina, meets a charming American lady called Beryl Carrington (Ann Gillis).  She tells him that a recent acquaintance – the personable Ramon Venino (John Carson) – has entrusted her with a list of political dissidents which he says will be vital in ensuring the future stability of the country.  Beryl passes the list to the Saint, who instantly comes under attack from the ungodly.  This raises Simon’s suspicions that the friendly Venino may not be all he appears to be ….

The Saint, like most ITC series of the time, requires a certain suspension of disbelief.  The opening stock footage and caption might tell us that we’re in Buenos Aires, but it quickly becomes clear that the filming was done a little closer to home.  Sometimes the programme makers can strike lucky and find a British location that does a fair job of doubling for this week’s foreign locale (or if not, they can simply stick a few palm trees into the frame and hope that does the trick!)

Alas, the opening of The Romantic Matron is one of the series’ less impressive location gambits.  We switch from Simon, relaxing at a pavement café, to a ridicously ugly building that isn’t at all in harmony with the attractive stock footage we’ve just witnessed.  For the dedicated ITC watcher, this will be a familiar sight – it’s the Elstree studios in Borehamwood.

Before we meet Beryl, there’s the little matter of the daring theft of one million dollars worth of gold bullion to consider.  The local police inspector (played by Patrick Troughton) resolves to hunt the criminals down.  If you’ve seen the Doctor Who story The Enemy of the World, then you might be able to guess what accent Troughton adopts – clearly it was his one size fits all solution when playing foreign types.

And what’s Simon doing whilst Beryl and Venino are becoming better acquainted and making googly eyes at each other?  Not a great deal, it has to be said.  This is another of those stories where the Saint remains off-screen until well into the episode – before that, Ann Gillis and John Carson take centre stage.

The title might suggest that Beryl, the romantic matron, is middle-aged, but Ann Gillis was only in her mid thirties at the time of recording.  As a child, she starred in a number of Hollywood films (seemingly positioned as the next Shirley Temple).  Her adult acting career was less prolific, although she notched up appearances in several other ITC series during the early 1960’s (Espionage, The Sentimental Agent).  Gillis is rather appealing as the ingenious adventurer – suddenly emboldened by her whirlwind romance with Venino.

John Carson’s second Saint role is much better than his first.  He’s still playing a foreigner, but at least this time he’s not browned up.  Always a favourite actor of mine, Carson manages to breathe a little life into a character that’s – possibly deliberately – not terribly well defined.

Once Beryl meets Simon and pours out her strange tale, then the story begins to pick up some impetus.  The Saint wasn’t a series which tended to dig too deeply into real-world politics, so the brief discussion here about Argentina’s current situation is fairly noteworthy.  Simon begins by pointing out how the people still seem to be a little nervous (a legacy, he claims, of decades of dictatorship).  However, things now seem to be on a more even keel thanks to the fairly popular government, suggesting that the story was set prior to March 1962 (which saw the moderate President Frondizi overthrown).

If this talk of politics seems a little dull, then never fear – it isn’t too long before Simon gets to duff up a couple of heavies.  It’s a cracking fight scene, with the Saint operating at full intensity (I especially like the way he slaps the second one around the face a few times before pushing him and his friend over and then toppling his bed onto them for good measure!)  You can tell it’s been a pretty severe tussle as Roger Moore’s usually immacuately coiffered hair is in a very distressed state by the end ….

The Saint gets a pretty good workout during this episode, as he’s later duffed up in a garage and then strung up for good measure. It looks fairly uncomfortable, but luckily Simon doesn’t stay trussed up for long.

The riddle of the missing gold bullion possibly isn’t too difficult a mystery to solve (especially when you discover that Venino – having bumped into Beryl’s car – was extremely keen to have the damage repaired at a local garage, all costs paid by him).

Larry Forrester’s teleplay relocates the action from Cuba to Argentina, but otherwise it sticks quite closely to Charteris’ story (originally published in 1958).  It’s mildly interesting that the crux of the story – Venino attempts to smuggle the stolen gold out of the country by fashioning solid gold bumpers (suitably camouflaged) onto Beryl’s car – was a plot point echoed in Ian Fleming’s Goldfinger, published in early 1959.  Did the one inspire the other, or was it just coincidence?

Fleeting appearances by some familiar faces (Patrick Troughton, Victor Spinnetti, Joby Blanshard) helps to keep the interest ticking along, but truth be told The Romantic Matron never quite sparks into life.  Gillis and Carson are both good and Roger Moore seems to relish the opportunity to handle a bit more action than usual, but the basic plot isn’t really that gripping.  Three halos out of five. 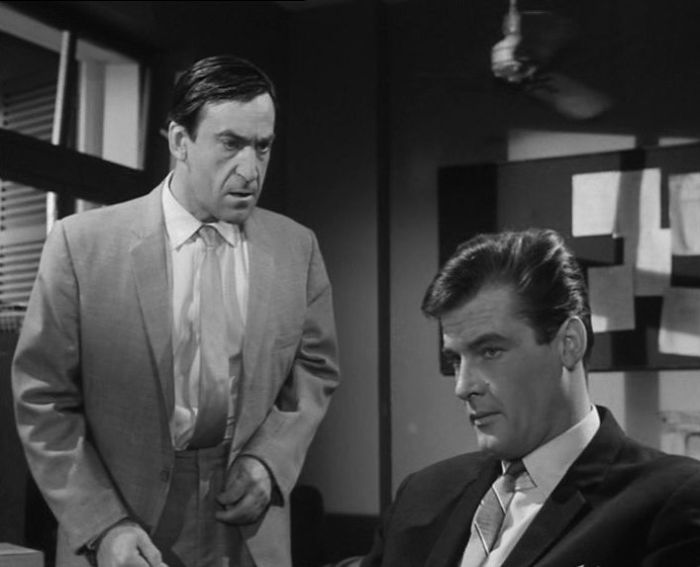 2 thoughts on “The Saint – The Romantic Matron”