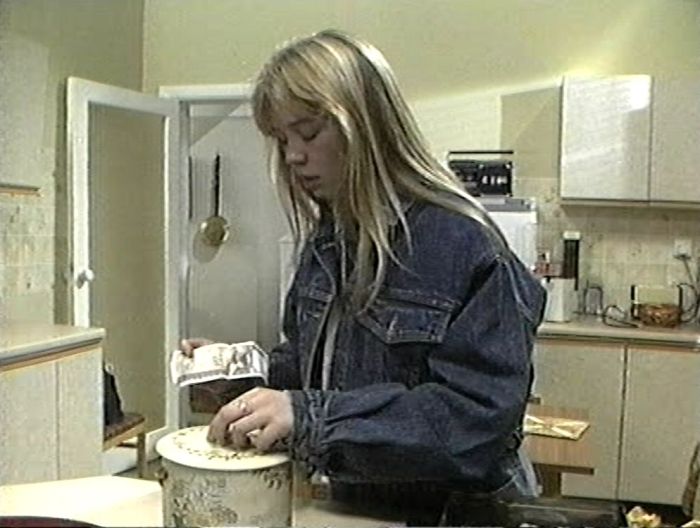 If Ronnie’s had a defining character trait since she first appeared back in 1985 then it probably would be her honesty. So the opening of this episode – she steals a ten pound note from behind her mother’s back – is the first sign that something’s awry with her. But no doubt she considers it was only “borrowed” and also in a good cause (expenses for the hip-hop competition).

What happens next is especially interesting. Ronnie, out in the local shopping precient, spies Calley, Helen and Georgina indulging in a little light shoplifting (lipsticks). Clearly blocking out her own pilfering, Ronnie is her usual moral self – she doesn’t directly accuse them, but it’s pretty obvious that everyone registers her disgust. How long have the others been shoplifting? It’s obviously not the first time. Calley must have become pally with the others offscreen as there’s not been a great deal of interaction between the three during the episodes to date. Whilst this seems to be just an incidental story detail, we’ll shortly see how it serves as the catalyst for Ronnie’s downfall.

Gonch, Robbie and Ziggy are back down the launderette. They seem to spend more time there than they do at school ….

Ziggy, attempting to get a free drink from the launderette drinks machine, gets squirted with boiling coffee for his pains. There are several points of interest here – not only is the drinks machine absolutely massive but the gleeful cackling from the old lady (played by Ruby Buchanan) after Ziggy gets splattered is very memorable. Subtle acting it isn’t. Ziggy then strips down to his boxer shorts, paying homage to a well known advert of the time.

Tensions at Chez Reagan remain high. Laura’s not exactly looking forward to an upcoming dinner party organised by her mother – as the loathsome Simon will be there – but the reappeance of a tanned Julia helps to cushion the blow somewhat.

Ronnie’s asked Gonch to arrange transport for the sound system, which will manipulated by Fiona’s cousin, the ebullient Wesley (Alan Cooke). This he does, although it probably wasn’t what they were expecting – a rag and bone man’s horse and cart! Were there still horses and carts on the streets of London during the late eighties? Slightly hard to believe, but it’s possible I guess.

Mrs Reagan’s party is in full swing and Simon makes an immediate beeline for Julia. He’s smoothness personified – expressing surprise that she’s not a teacher but is actually Laura’s former best friend.

The hip hop party is also swinging, albeit just a little bit louder. It’s probably not coincidental that the episode switches between the two – especially since we hear one of Mrs Reagan’s guests querying “what’s hip hop?” in their best high court judge’s voice. Luckily Simon’s on hand to explain to a bow-tied older gentleman that the Beastie Boys are hip hop people, sort of (everybody seems to have heard of them). Mrs Reagan wears an expression of delight as her beau once again demonstrates his knowledge of just about everything.

Later there’s some smoochy dancing in the (fairly small) living room. Spandau Ballet’s True (something of a golden oldie at this point) is their song of choice. We then jump back to the hip hop competition, where Fresh ‘n’ Fly finally have their chance to compete. They’re …. okay, but obviously not the best. Mind you, their weedy sound system might have had something to do with this.

Fresh ‘n’ Fly don’t win the competition, so there’s no prize money for them. How will Ronnie replace the ten pounds she pilfered from her mother?

And then we’re back again to the dinner party, where Simon’s decided that he’d rather like to kiss Julia (he corners her in the kitchen when no-one else is about). This is a final confirmation that he’s a rotter (to be honest, it would have been more of a shock had he turned out to be a decent chap after all). And then Julia disappears. This was her sole S11 appearance (and her final GH credit too) so clearly she featured here just to perform a single function – the reveal (only to the audience at this point) that Simon’s nothing more than a slippery snake. 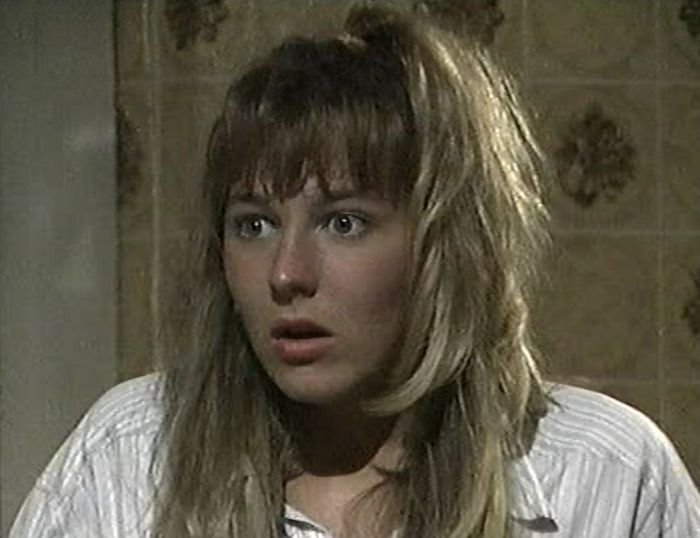