Skip to content
HomeDoctor Who – Marco Polo. Episode One – The Roof of the World 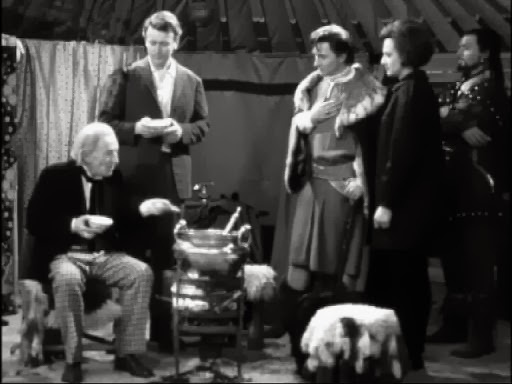 With Marco Polo we’ve reached the first of the missing stories, although back in 2013 it seemed very possible that it had been recovered and we’d be enjoying it on DVD within a matter of months. The MEW rumour had been bouncing around various Doctor Who forums for a while (basically stating that three stories – Marco Polo, Enemy of the World & Web of Fear had been found). And when all of Enemy and most of Web did resurface shortly afterwards you could have laid a guinea to a gooseberry that Marco wouldn’t be far behind them.

Four and a bit years later there’s still no sign of it, so it seems that this rumour was only 66% right (although there are still some who cling to the belief that Marco Polo is out there somewhere). I’ve love to think that it was and that some day I’d be able to watch it on DVD (no download for me, thank you!) but if it isn’t, and no other missing episodes are ever found, then we should really just count our blessings.

All ninety seven missing episodes exist as good quality audio recordings (which have been further improved by the work of Mark Ayres during the last decade or so). We may sometimes take the audios for granted, and grumble about how annoying it is that we can’t see the pictures, but it’s worth taking a moment to stop and consider how some other popular series of the time have fared.

There’s reputed to be one poor quality audio of an Avengers episode existing in private hands, some muffled audios of Public Eye exist (several found their way onto the early DVD releases) whilst a handful of audios from Out of the Unknown were made (and are included on the BFI’s DVD release. Not bought it yet? You really should, it’s an excellent package! If you need further convincing I’ve written about it at length here).

These fairly slim pickings demonstrate just how fortunate Doctor Who is. This is particularly noteworthy when it comes to Marco Polo. The show had only been running for three months, so it’s a little surprising (but very welcome) that there were people who even this early on were dedicated enough to record every episode.

Although The Roof of the World is generally held to be the point where the Doctor starts to act more like the Doctor we come to know, he’s still remarkably bad-tempered at the start. This may be because he’s concerned for their safety (the TARDIS has broken down in the Alps and with no heat their prospect of survival looks slim) but he’s still incredibly dismissive when Ian offers to look for fuel. “Oh well, I wish you luck.”

The telesnaps offer us an insight into how these early scenes look. It’s no surprise that the Roof of the World looks rather stagey and there also appears to be a wrinkled backdrop behind the time-travellers (always a hazzard in these early stories – see The Aztecs for another example). The subtle wind effect helps to sell the illusion of cold though.

Our heroes run into the warlord Tegana (Derren Nesbitt). From his first words his character is made clear. “Hear me, Mongols. In these parts live evil spirits, who take our likeness to deceive us and then lead us to our deaths. Let us therefore destroy these evil spirits before they destroy us.” Whilst we can’t see him, it seems clear that Nesbitt relishes the dialogue he’s been given and he’s wonderfully entertaining throughout the story.

Their execution is stopped by Marco Polo (Mark Eden). If Tegana is presented as superstitious and menacing then Marco appears to be enlightened and affable. But both have their own agendas and Marco, whilst he’s friendly, quickly demonstrates that he’s equally as ruthless as Tegana. He appropriates the TARDIS and tells the Doctor that he wishes to present it to Kublai Khan as a gift – he then hopes that the Khan will then grant him leave to travel home to Venice.

This is the plot device that ensures that the Doctor remains – otherwise he would have left at the first available opportunity. Variations to make the TARDIS inaccessible are used throughout the first season (the missing fluid link in The Daleks, a forcefield in The Keys of Marinus, etc) as the Doctor is not yet written as a character who’ll stay and help people simply because it’s the right thing to do.

There are a few examples of Doctor Who‘s early educational remit. Early on, Susan finds a giant footprint – although Ian ponders that it may be just a normal sized print which looks bigger because the snow around it has melted. And later on, the science teacher in him can’t help but give Marco a quick lesson.

POLO: I’m afraid the liquid is not too warm, but the cold here is so intense, it even robs a flame of its heat.
IAN: The cold can’t affect the heat of the flame, sir. The liquid boils at a lower temperature, because there’s so little air up here.
POLO: You mean the air is responsible?
IAN: Well, the lack of it. Just as the lack of it is responsible for the Doctor’s mountain sickness.

Susan makes friends with Ping-Cho (Zienia Merton). Having someone in the cast around Susan’s age allows her to have some decent character moments and she opens up to Ping-Cho in a way we haven’t seen before.

3 thoughts on “Doctor Who – Marco Polo. Episode One – The Roof of the World”