Skip to content
HomeDoctor Who – The Aztecs. Episode Two – The Warriors of Death 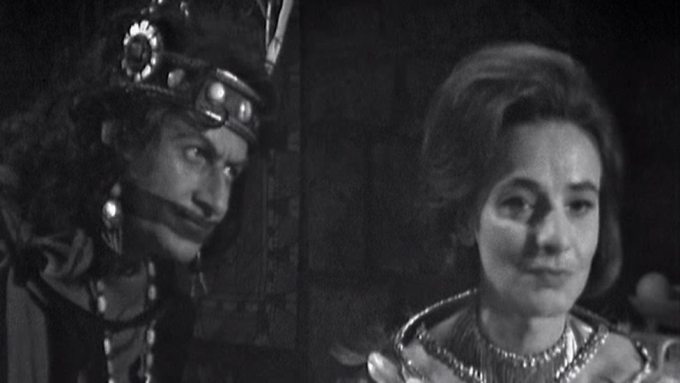 The Doctor is furious with Barbara for halting the sacrifice. We’ve seen an angry Doctor before, but not like this and it’s clear that Hartnell relishes the opportunity to really go for it. Hill is excellent as well and it’s one of those scenes that crackles with energy, although it’s notable that the Doctor doesn’t remain angry for very long (another sign of the general softening of his character).

This short exchange, beautifully delivered by Ringham and Hill, tells us everything we need to know. Tlotoxl is convinced that Barbara isn’t the spirit of Yetaxa, but lacks any proof. This means he’ll spend the remainder of the story using whatever means are at his disposal (in this episode it’s Ian) to chip away at the composure of the false goddess.

Having won a victory over Ixta with his magic thumb, Ian then faces a rematch – but Ixta will have a secret weapon (the unwitting help of the Doctor). It’s a slight contrivance that Ixta is the son of the man who built the temple, which means the Doctor (in exchange for non-existent temple plans) hands over a plant that will disable his opponent (who turns out to be Ian). Two coincidences, that’s rather a lot!

I like the way the Doctor describes himself to Cameca. “I am a scientist, an engineer. I’m a builder of things.” There may be the hint of pretence here, as he’s attempting to explain his interest in the temple, but there’s an essential truth to this statement. Much, much later he’ll become the defender of the universe (whose name alone makes monsters tremble in fear) and part of the charm of the series will be lost forever.

Carole Ann Ford’s off on holiday, so only appears in a single pre-filmed scene. It’s another nod back to Lucarotti’s previous story, as Susan reacts in horror to the thought of an arranged marriage (much as she did when she learnt of Ping-Cho’s intended fate).

The Doctor, realising that Tlotoxl means them great harm, asks Barbara to play up to Autloc. The more she can convince Autloc that she is Yetaxa, the more it will help them. Barbara’s happy to do this, no doubt because she still clings to the hope that she can bring about a fundamental change in their society, but it already poses the uncomfortable question about what Autloc’s fate will be once he realises his faith in Barbara was misplaced.

AUTLOC: If your words are denied, shall we not be living in defiance of the gods?
BARBARA: Famine, drought and disaster will come, and more and more sacrifices will be made. I see a time when ten thousand will die in one day.
AUTLOC: Where will it end, Yetaxa?
BARBARA: In total destruction. Your civilisation will pass forever from the land.
AUTLOC: You prophesy our doom.

Even this early on, we’ve been primed that there won’t be a happy ending. In this era of the programme, the Doctor’s main focus is survival – fighting injustice is something he does rather as an afterthought. But whilst later stories might see him toppling entire civilisations with a few words, you do get the sense that this isn’t going to happen here.

The fight between Ian and Ixta goes on a little too long (and like Ixta’s fight in the previous episode suffers from being shot on VT) but it does leave us with an excellent cliffhanger. As Ian faces death, Tlotoxl taunts Barbara to use divine intervention to save him ….