Since 2018 marks the fortieth anniversary of Blakes 7, it seems like the ideal time for a complete series rewatch (and as there are 52 episodes in total, it fits nicely into a one-a-week watching pattern). I’ve been logging very brief capsule reviews elsewhere on the Internet with fellow travellers since January, but I thought it would be handy to re-publish them all here – with possibly the odd tweak or two along the way.

A nicely twisted dystopian opener, even if there are a few plot points which have always niggled. Clearly the Federation’s brainwashing process isn’t terribly effective (Blake quickly regains all his forbidden memories shortly after his meeting with Foster). And since the children have had false impressions planted, why not do the same with Blake – thereby convincing him that he did assault them?

The child abuse angle is rather jarring and it’d be interesting to know whether it was originally intended to reference it in later episodes. Blake attempting to clear his name would have been a decent running theme, but the matter is quietly forgotten after this episode.

Being generous, you could take it as an early example that the Federation aren’t terribly efficient at smearing their political opponents (clearly they don’t know how to work the media). As the series progresses, Blake quickly builds a legend – but it’s for all the right reasons (striking a blow against his oppressive Federation overlords) rather than the wrong ones (nobody ever asks him if he’s Blake the convicted paedophile).

Wonky logic aside, The Way Back boasts some impressive modelwork (the Dome) which helps to balance out some of the more threadbare studio sets. Gareth Thomas is suitably impassioned whilst Michael Keating and Sally Knyvette – with their limited screentime – both catch the eye. A pity that the borderline psychotic Vila we see here didn’t last long.

Leylan is an interesting character. At heart he seems like a decent man, but he allows his subordinate – the sadistic Raiker – free reign across the ship. The moment when Leylan tells Raiker to be “discreet” with their female prisoner is an oft quoted one. It’s easy to see parallels between the Federation and the Nazis (with Nation scripting, possibly not a surprise).

Leylan is positioned in the narrative as the complicit German/Federation type. Not intrinsically evil himself, but willing to turn a blind eye to the misdeeds of others. What strikes me most about this sort of character is that whilst Blake seems to believe that the Federation is a monolithic entity with a single voice or heart (“I intend to see that heart ripped out!”) people like Leylan suggest that Federation society is much more complex than the black and white picture painted by Blake. So every time he goes on a killing spree, Blake might be mowing down careerists such as Leylan and Artix.

When we first see the prisoners on the flight deck, it’s not surprising that our eyes are drawn to those we’ve met before – Blake, Jenna and Vila. Apart from these three, Gan is prominent in the frame (the camera very much favouring him) whilst we don’t see Avon at all to begin with. It can’t be a coincidence that he’s disconnected from the others, even when he’s only sitting in his flight seat …

Once Blake and Avon meet, the series begins to pick up momentum. Was it scripted or an acting choice that Avon didn’t look at Blake during their first conversation? Either way it’s a nice touch which – right from the start – tells us that their relationship is fated to be an uneasy one.

Cygnus Alpha has two main plot threads – Blake, Avon and Jenna getting to grips with life aboard the newly christened Liberator and the power struggle down on Cygnus Alpha.

It’s the former which is by far the most engaging. The continuing bubbling conflict between Blake and Avon – with Jenna caught in the middle – is nicely done. It’s interesting that both Blake and Avon discover they worked on the same project (a teleport system) which implies that they’re more similar than either would like to admit.

The timescale of this episode and the previous one makes no sense. In total, it takes the London eight months to reach Cygnus Alpha, yet it seems like Blake and the others have only been onboard the Liberator for a few hours. Are we to believe that Blake waited nearly eight months before inciting the others to take over the London? That seems barely credible, but neither does the notion that Blake’s spent months kicking his heels in the Liberator whilst following the London at a snail’s pace ….

Cygnus Alpha may be a quarry, but the night filming – and the well executed glass shots – ensures that it’s a memorable location (the model shots are excellent too – plain to see that a fair chunk of the budget was spent on these early episodes). It’s notable that once the prisoners are released from the London, Gan is easily the most proactive. He’d rarely get the opportunity again to be quite so front and centre.

With Blake looking for his “people” down on the surface, that leaves Avon and Jenna alone on the ship. The scenes where they debate whether to cut and run are amongst the most memorable of the episode. Easy to believe that Avon would, but Jenna already seems to be hero-worshiping (at the very least) Blake so it’s just as easy to understand why she wouldn’t.

It’s a pity that – although we didn’t know it at the time – Jenna’s character had already peaked. When Vila comes aboard, the pecking order of Blake/Avon/Vila with Jenna and Cally jostling for position lower down and Gan a very distant last was pretty much established. Given this, it’s not surprising to learn that Sally Knyvette was keen to leave at the end of the first series.

Once Brian Blessed begins ranting and raving then my interest begins to dip a little, but overall this is a pretty decent episode. Especially when compared to the next two …. 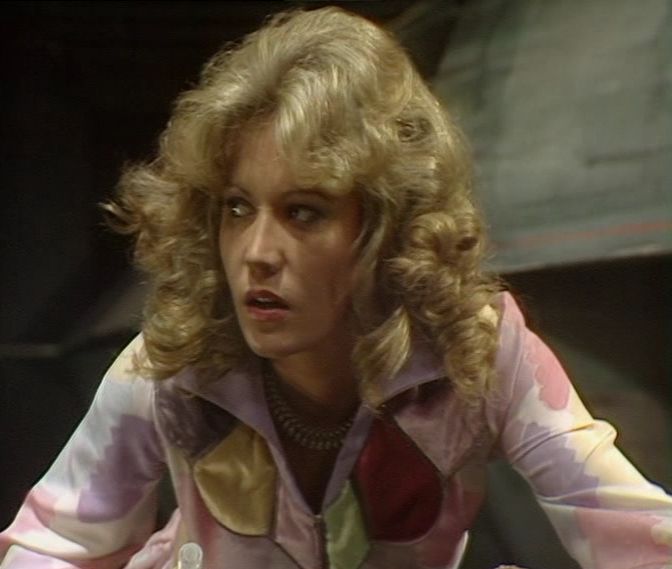 Time Squad has two separate plotlines, neither of which are completely successful. The first five minutes or so, which takes place on the Liberator flight deck, might be mostly info-dumping but the dialogue is nicely sparky.

The communications centre on Saurian Major is rather like a proto Star One. Destroy it, says Blake, and the Federation will be crippled. The problem is that when they do this, life in the Federation goes on as normal. This is either sloppy scripting from Nation or it’s an early example that Blake really doesn’t know what he’s talking about. I prefer to think it’s the latter.

The Saurian sequences are mainly memorable for Cally’s debut and the location filming at Oldbury. A pity that Cally is fooled by Blake’s look over there trick, but the arrival of a fanatical, obsessive freedom fighter (happy to die for her cause) promises to shake things up. Sadly her character loses this early aggressive spark very quickly.

Security at the base isn’t very good is it? Blake and the others just swan in and reach their destination with embarrassing ease. This rather beggars belief and helps to blunt the effectiveness of the Saurian subplot.

But Blake’s adventures do rather play second fiddle to the saga of a space capsule which contains a number of deep-frozen homicidal warriors, who – once they’ve been thawed out – jerkily spring into life and menace Jenna and Gan. This is the first – but by no means the last – time our heroes come across a derelict object floating in space. You’d have thought that the hard lesson they learn here would make them more cautious in future – but no, every time they spot a piece of space flotsam they can’t help but poke their noses in (always with disastrous results).

Jenna, unusually, gets to drive the action. With Gan fainting all over the place she has to step up to the mark and demonstrate her unarmed combat skills. Thanks to a few decent camera moves and Dudley laying on the tense music, these scenes are, at times, quite good. No classic then, but decent enough fare.