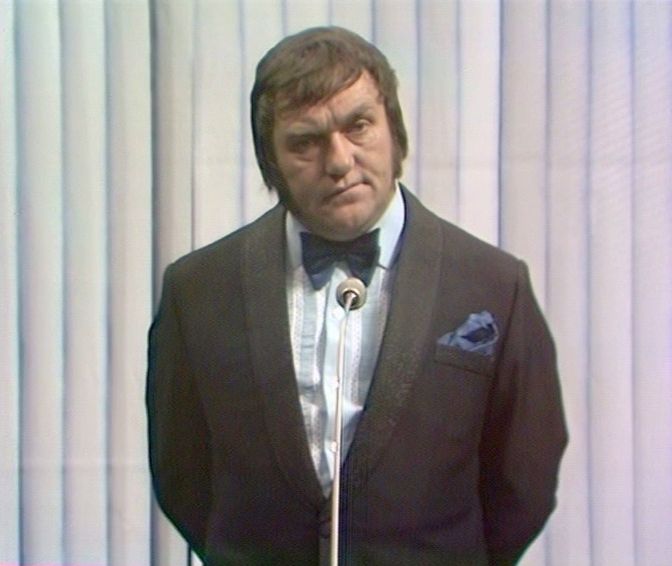 Broadcast during August and September 1971 and running to a measly four editions, series three of Sez Les clips along at a fair rate of knots (although Dawson himself is in short supply). This is due to the fact that he has to share the stage with regular acts The Skylarks (a rather decent vocal harmony group) and the Syd Lawrence Orchestra as well as a number of guest performers. With each edition only running for twenty five minutes, there’s a fair amount to be crammed in …

The formula tends to run as follows. After the Syd Lawrence Orchestra and the Skylarks have welcomed him to the stage, Dawson kicks off proceedings with a short monologue (returning in the second half with a longer monologue). Each edition has a single sketch with the remainder of the time being taken up with the guest performers as well as spots for the Skylarks and the Syd Lawrence Orchestra (who close proceedings). The final two editions also have some brief film inserts, showing Dawson interacting with ordinary members of the public.

Luckily I have an almost unquenchable thirst for 1970’s LE, so the number of musical performers isn’t really a problem for me. But for those who are interested in seeing more of Dawson, you might be advised to skip ahead to one of the later series (plus the arrival of David Nobbs helped to sharpen the series’ comedy sensibilities quite markedly).

Guest wise, Manitas De Plata strums a mean Spanish guitar, Dana has a very credible stab at a George Harrison song (Isn’t It A Pity), Frank Ifield warbles in an entertaining fashion, Anita O’Day jazzes things up (her obituary makes for interesting reading) whilst Georgie Fame and Alan Price are good value in the final edition, as is Kathy Kirby. For those familiar with other LE programmes of this era (such as The Two Ronnies or The Morecambe & Wise Show) many of those names will be familiar.

Brian Glover assists Dawson with the sketches seen in the first two editions – the second (Dawson as an extremely nervous dentist attempting to remove Glover’s tooth) being the better of the two. It’s not subtle, but it’s good fun. After leaving Monty Python John Cleese would become a Sez Les regular, but it’s slightly more surprising to see him pop up here in a couple of brief sketches.

It’s likely Cleese recorded his contributions in something of a hurry. The train sketch in show three should have been tailor-made for him, but it’s rather thrown away and there’s little bite to his reactions of Dawson’s improbably dressed Highlander – complete with caber! The second sketch with Cleese is rather better (it also switches from VT to film in a way that’s almost Pythonlike).

Maybe the budget for the last few episodes was a little greater. In addition to this brief film insert, Dawson also went out and about on the streets, ensnaring unsuspecting members of the public with hidden camera stunts. Presumably these gags were real and not staged (although since Dawson had been a television regular for a few years it’s surprising nobody seemed to recognise him).

Producer/Director David Mallet had worked with Dawson before on Joker’s Wild. Knowing that Mallet would later pursue a career as a top music promo director (Queen and David Bowie were amongst his clients) it’s interesting to look back at his early work to see if there’s any visual flair in evidence. For Joker’s Wild, probably not – but then it was a rather static sort of series (the main highlight being a wobbly camera zoom into Barry Cryer at the start of the show).

He had more to work with during Sez Les though and the Syd Lawrence interludes do have some fast intercutting and unusual camera angles, suggesting that Mallet was interested in shaking up the visual grammar of this type of show.

Not a rib-tickling 100 minutes then, but entertaining nonetheless. As my occasional rewatch continues, it’ll be interesting to see the point at which the series began to grow. Several changes – increasing the running time, dropping the musical acts for a while – helped to shake the format up.