Skip to content
HomeDoctor Who – The Reign of Terror. Episode One – A Land of Fear 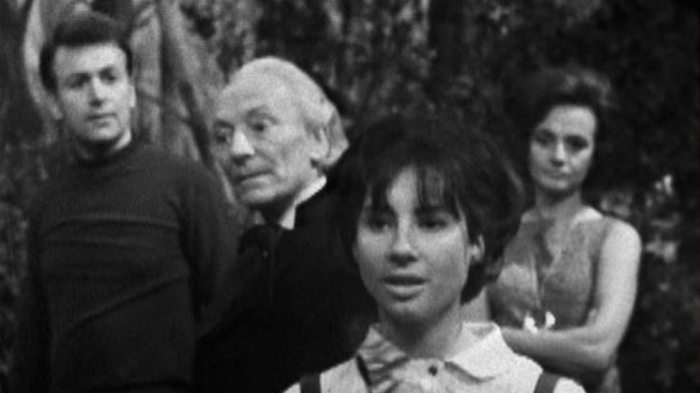 The Doctor’s in a right old strop at the start of this episode (his bad mood carries over from the previous cliffhanger).  This feels a touch artificial and seems to have been done for two reasons – not only does it create a good hook into A Land of Fear (otherwise the last episode might have ended with the Doctor saying “oh look, a forest”) it also gives the regulars, especially Hartnell, some nice character moments in the opening few minutes of the story.

William Russell has spoken in the past about how the arrival of Dennis Spooner was greeted with enthusiasm by the main cast.  Spooner had a good ear for naturalistic dialogue and also liked to pepper his stories with humour.  And following the earnest and rather stilted dialogue which sometimes cropped up in The Sensorites, The Reign of Terror does come as a breath of fresh air.  However, it’s notable that Spooner’s scripts do feature various Americanisms, which feel strange coming from the mouths of the TARDIS crew, simply because they’ve never spoken like this before (Hartnell, for example, says “you don’t say” later this episode.  This feels jarring after watching the series in order).

The Doctor is convinced that he’s landed Ian and Barbara back in England 1963 and is keen drop them off and move on.  Not surprisingly, Ian and Barbara aren’t prepared just to take the Doctor’s word for it.  This infuriates the Doctor.  “I’m rather tired of your insinuations that I am not master of this craft. Oh, I admit, it did develop a fault, a minor fault on one occasion, perhaps twice, but nothing I couldn’t control.”

This is lovely stuff and Hartnell plays it to the hilt.  As we’ll see time and time again over the years, the joke’s on the Doctor since his confidence does turn out to be entirely misplaced.  They’re in France, not England, and a couple of hundred years back in time.  The TARDIS has set them down during the French Revolution (“the reign of terror”) which according to Susan is the Doctor’s favourite period in Earth history.  I wonder why. Does he enjoy the sight of all those French aristocrats being sent to the guillotine?  The Doctor never explains why he enjoys this time so much, so we’re left guessing.

The TARDIS crew meet Rouvray (Laidlaw Dalling) and D’Argenson (Neville Smith) at an abandoned farmhouse.  Both Frenchmen are on the run from the authorities and it seems  probable that they’ll be significant figures in the story.  Whilst D’Argenson is nervous and apprehensive, Rouvray is calm and still in total command.  He may be a hunted man but possesses an unbelieving belief in his own authority.  He bluntly tells Ian and Barbara that “in France now there are only two sides. You’re either with us or against us. Our sympathies are obvious. We want to know yours.”

The arrival of a group of soldiers immediately darkens the tone.  They’re depicted as a barely controllable rabble, with the common soldiers openly contemptuous of the Sergeant’s authority. The Sergeant (Robert Hunter) cleverly doesn’t attempt to browbeat his men into obeying his orders, instead he suggests that if they watch the back of the house they might have a chance to kill some royalists.  This meets with their approval and they move into position.

Whilst Robespierre might later claim this is a glorious and just revolution, the behavour of the soldiers is clearly designed to indicate otherwise.   And when Rouvray and D’Argenson are both brutally murdered it helps to reinforce the concept that life is now very cheap.  Since both characters seemed to have been set up to play a major part in the narrative, their sudden deaths are quite shocking.  It also serves as an early demonstration that the Doctor and his friends could also face death at any time.

Rouvray’s death is a noteworthy moment. He disarms one of the soldiers just by asking for his rifle and then comments that “you can give them uniforms, Lieutenant, but they remain peasants underneath.”  This is another example of Rouvray’s unshakable belief in his own authority, but it’s also a demonstration of the ruling elite’s unspoken arrogance.  Did this exchange led directly to his death?  It seems more than likely.

With the Doctor unconscious in the upstairs part of the house, the soldiers decide to take Ian, Barbara and Susan to Paris. Their motivation is not out of a sense of duty though – they believe there might be a reward and are keen to collect.  They torch the house before they depart, which means we conclude with a strong cliffhanger – the Doctor awakes to find himself trapped in a raging inferno …. 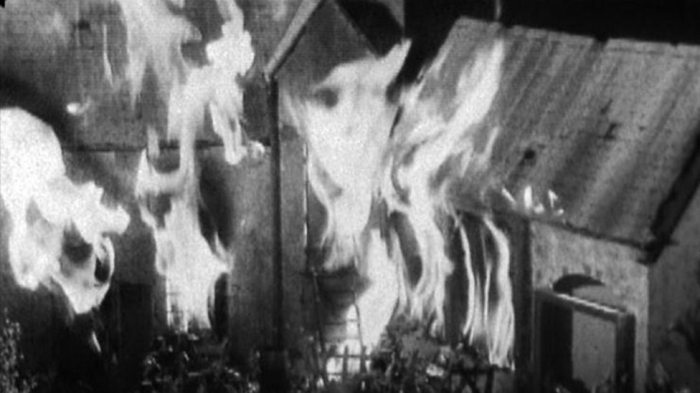 2 thoughts on “Doctor Who – The Reign of Terror. Episode One – A Land of Fear”