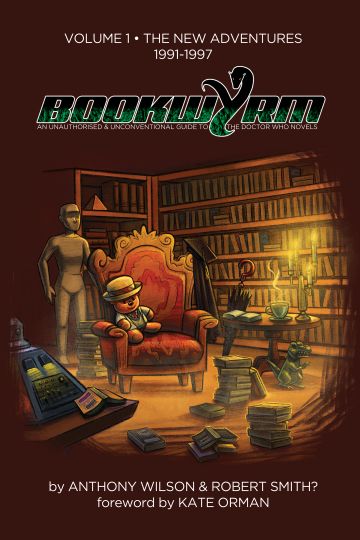 By the early nineties, with Doctor Who either dead or simply in limbo (depending on how optimistic you were) The New Adventures filled an aching gap. New Doctor Who stories available on a regular basis!

How times change. Fast forward thirty years and we’re now drowning under a surfeit of supplementary Who. The notion of attempting to read every DW novel and listen to every DW Big Finish audio currently available is surely a task beyond all but the most foolhardy or devoted.

But back in 1991 we were in virgin (sorry) territory. The New Adventures offered fans a continuation of their favourite series, but it was also much more than that. Generally the books weren’t content to simply replicate the tone and feel of television Who – the NA’s were keen to take DW to strange and new places.

I was there, right from the beginning (Timewyrm: Genesis) all the way through to the bitter end (The Dying Days) and certainly had my ups and downs with the series. For example, Original Sin really irritated me (the reveal of the baddy was the sort of fan-pleasing nonsense that I never enjoyed) but another book usually came along (Head Games or Just War, say) which made me keep the faith.

Although I was picking up the later books more out of a feeling of habit than love, the NA’s were still a very important part of my nineties fandom experience. In recent years I’ve occasionally thought about digging them out for a re-read and there’s no doubt that Bookwyrm: Volume 1 has fired my enthusiasm and made that prospect much more likely ….

The format of Bookwyrm: Volume 1 is straightforward. Each NA has its own chapter which is broken down into categories, ala The Discontinuity Guide (The Big Idea briefly summarises the plot, What You Need To Know explains how the book fits/doesn’t fit into established continuity, Timey-Wimey pinpoints any influences the book had on NuWho, plus there are sections for dialogue triumphs, disasters, etc).

Wilson and Smith? then sum up their feelings about each story. Often they’re in agreement, but sometimes not (and it’s always more interesting when opinions diverge). Indeed their trenchant viewpoints are the main reason why Bookwyrm: Volume 1 is such an entertaining read.  It might be a densely detailed book, but it’s also chatty and highly opinionated.

But this may well have had something to do with the fact that The Highest Science was the sort of “traditional” story that the more conservative wing of fandom would have embraced. Whereas Transit was definitely “new” and therefore something to be approached with caution.  I’m keen now to go back and revisit both of them. Is Transit a lost classic? I’ll let you know in due course.

But there’s no disagreement from them or me about the quality of the first NA, meaning that John Peel receives a well deserved kicking for Timewyrm: Genesis.

Like a child in a sweet shop, Peel has discovered that writing a book means there are no limitations regarding actors who, on television, have to be paid (or, indeed, alive) to appear, so cameos and continuity references abound. Like nausea, it comes in waves, calming down for a time then springing itself upon you when you least expect. Pages 140–141, for example, mention K’Anpo, Sontarans, Vardans, the Matrix, K9, Leela, Andred, Katarina, Sara Kingdom, Daleks, Adric and Cybermen, all in the space of about 25 lines.

In many ways, it’s quite fun, and there’s a certain amount of giddy enjoyment to be had. Unfortunately, like the child in the sweet shop, too much and you get sick. We hit this point when the seventh Doctor has to call up the ghost of Christmas Past himself, Jon Pertwee, because, apparently, the seventh Doctor can’t manage some rewiring by himself (p205).

The rant about No Future‘s cover is also highly amusing, but to be honest there’s something equally pithy about every single book and this is why Bookwyrm: Volume 1 is such a rewarding and amusing read.

No Future’s cover may well be the worst cover in the entire NA line — and, hence, the worst cover in the entirety of literature. Everybody’s hair somehow contrives to be both fluffy and spiky at the same time, except for Benny, who appears to be wearing some sort of Liza Minnelli–inspired helmet. The drummer is apparently a midget with one enormous leg. The guy behind Ace is choking on an almond, for some reason. And you’ll swear blind that Mawdryn, the fifth Doctor’s nemesis with an exposed brain, has made an appearance in the book… until you realise that said exposed brain is actually supposed to be some sort of flat cap, hovering on top of his head. Either that or a pizza. They say you shouldn’t judge a book by its cover. But in this case, you probably can.

No Future the book doesn’t get a great deal more love than the cover did, which was another surprise as my 25-year old memory doesn’t record that it was that bad.  Another one to add to the re-read pile I think.

Any NA old-timers or indeed anybody who has stumbled across these books more recently will find plenty to enjoy here.  An immensely enjoyable, highly dippable tome, Bookwrym: Volume 1 comes warmly recommended.

Bookwyrm: Volume 1 is released by ATB Publishing on the 18th of March 2019. Ordering information can be found on their website.