Skip to content
HomeDoctor Who – The Crusade. Part One – The Lion 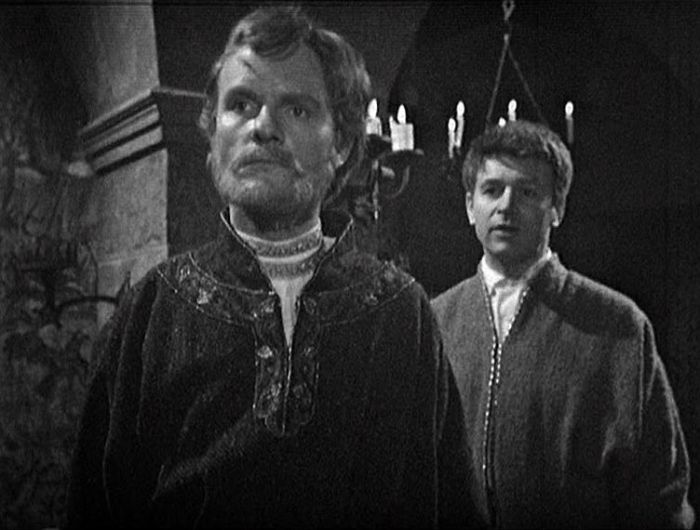 The Crusade brings the TARDIS to the Holy Land at the time of the Crusades.  Whilst the Doctor, Ian and Vicki eventually join the court of King Richard (Julian Glover), Barbara finds herself in the enemy camp, captured by the evil El Akir (Walter Randall) and brought face to face with Saladin (Bernard Kay).

Given that this story was made in 1965, it does have a rather surprising revisionist feel about it.  Since Richard the Lionheart had for so long been portrayed as one of England’s greatest heroes (the Robin Hood saga often hinges on the hope that one day Richard will return to right the wrongs of his brother) it’s a jolt to find him painted as a somewhat unheroic and uncertain character.

The episode opens with Richard and his friends relaxing in the forest.  Sir William des Preaux (John Flint) fears an attack – but Richard is arrogantly dismissive.  It quickly transpires that des Preaux was correct and shortly after many of Richard’s friends are slain.

Barbara and William des Preaux are captured by the Saracens, whilst the only other survivor (apart from Richard himself) is Sir William de Tornebu (Bruce Wightman).  de Tornebu owes his life to the intervention of the TARDIS crew – thanks mostly to Ian, although the Doctor plays his part (it’s always a treat to see William Hartnell in fighting mode!).

William des Preaux claims to be the King in order to draw attention away from Richard. At this point in the story the cramped nature of the studios is quite noticeable – as good a director as Douglas Camfield was, it’s impossible not to notice that Richard was lying very close to where des Preaux was captured.  It’s therefore difficult to believe that El Akir and the other Saracens couldn’t see him.

After the Doctor finds some suitable clothes for himself, Ian and Vicki (via the sort of comedy business moment that Hartnell always excelled at) there are two main scenes left in the episode – Barbara’s meeting with Saladin and the Doctor, Ian and Vicki’s first encounter with Richard.

Despite being caked in brown make-up, Bernard Kay is mesmerising as Saladin.  He has the power of life and death over Barbara – and many others as well – but he has no need to be demonstrative.  He remains thoughtful, restrained and articulate as he probes the reason for Barbara’s presence.

SALADIN: Please talk. It helps me to consider what I have to do with you.
BARBARA: Well, I could say that I’m from another world, a world ruled by insects. And before that we were in Rome at the time of Nero. Before that we were in England, far, far into the future.
SALADIN: Now I understand, you and your friends, you are players, entertainers.
SAPHADIN: With little value in an exchange of prisoners with the English King, brother. This is a trivial affair. I do not know why you waste your time.
SALADIN: I cannot dispense life and death lightly. If Sir William is to be returned, he must make good report of our mercy. Perhaps that is the factor in your favour.
BARBARA: I don’t believe you’re as calculating as that.
SALADIN: Then learn more of me. You must serve my purpose or you have no purpose. Grace my table tonight in more suitable clothes. If your tales beguile me, you shall stay and entertain.
BARBARA: Like Scheherazade.
SALADIN: Over whose head hung sentence of death.

By contrast, Julian Glover’s Richard is highly emotional (no doubt the difference between Saladin and Richard was an intentional touch from Whitaker).  Richard berates the loss of his friends, although it’s difficult not to concede that his own reckless actions were, in part, responsible for the calamity.

The Crusade is one of those stories where, as we’ll discuss later, the Doctor and his friends are largely superfluous. Julian Glover is so good (and he’s provided with some lovely Shakespearean-type speeches by David Whitaker) that it’s very easy to imagine this story as a straight play without the TARDIS crew being present.

Once again, I am in your debt. But I’d give this for de Marun and the others. My friends cut down about my ears or stolen. My armies roust about the streets and clutter up the streets of Jaffa with the garbage of their vices. And now I learn my brother John thirsts after power, drinking great draughts of it though it’s not his to take. He’s planning to usurp my crown, and trade with my enemy, Philip of France. Trade! A tragedy of fortunes and I am too much beset by them. A curse on this! A thousand curses!