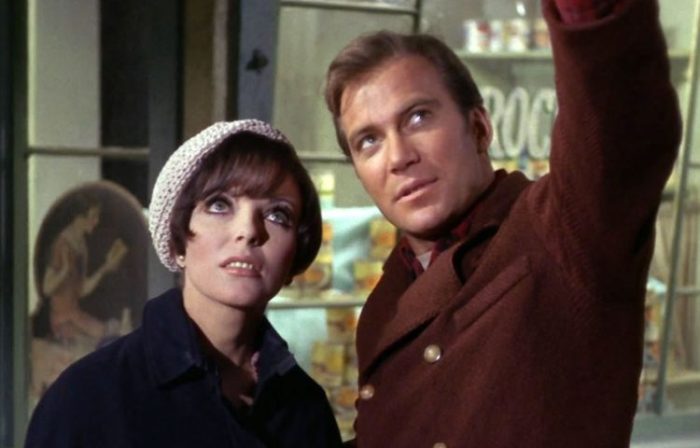 Few Star Trek stories have generated quite the same level of debate and interest as The City on the Edge of Forever has.

It’s well known that the series often saw disgruntled writers irked at the way their scripts were reworked before they reached the screen, but no other scribe was quite as vocal about this issue as Harlan Ellison was. There’s plenty of additional reading for those interested – such as Ellison’s own book on the subject (which includes one of his draft scripts) and a graphic novel adapting his original screenplay.

Sometime, when I’ve a few days to spare, I’m going to investigate the whole saga in depth …

The television City opens with a mad McCoy on the rampage.  The way that McCoy accidentally skewers himself with a hypodermic full of Cordrazine feels a tad unsatisfactory. Cordrazine is an excellent plot contrivance drug, filling the subject with an overwhelming sense of paranoia and delusion (thereby turning the normally rational McCoy into the ideal sort of person to drive the story forwatd).

Bones beams down to a nearby planet filled with Ionic columns (for some unspecified reason) and a mysterious, if rather cheap looking, edifice who grandly proclaims himself to be the Guardian of Forever.

If a wacky, out of control McCoy is plot contrivance number one, then the Guardian’s time portal (a magic door which provides the user with a gateway to their own past) is number two. But let’s not niggle – once McCoy has jumped through the portal (and changed time in a dramatic fashion) we know that the preamble is over.

Kirk and Spock follow him through to 1930’s depression era America. Their mission? Find McCoy and ensure that time is placed back on the right track.

We’ve sort of been here a few times before (or rather alien planets which resembled this era) so it’s not quite novel. But it’s still fun to see Kirk and Spock – fishes out of water – learning to adapt to this strange new world. Stealing some clothes seems quite straightforward, until they run into a police officer ….

Shatner and Nimoy deadpan nicely as Kirk and Spock attempt to explain Spock’s strange appearance (he’s Chinese and caught his ears in a mechanical picker when he was a child). This is a bit silly (and ever so slightly racist) but there’s something appealing about the way the pair seem to be slightly more relaxed and off-duty in this new world.

The arrival of a soft focus Edith Keeler (Joan Collins), who runs the 21st Street Mission, changes the tone of the story. Immediately the soundtrack gets very string heavy and Kirk begins to pay close attention to Ms Keeler. Joan Collins! Her appearance is obviously one of the reasons why this story has retained a certain profile.

Edith turns out to be a prophet as somehow she’s able to picture a future where mighty starships explore the galaxy (Jim’s obviously impressed with this). Quite why she’s decided to share this news with the down and outs at the Mission is something I’ve never been able to work out. Presumably they view her ramblings as a reasonable price to pay for a bowl of soup and a warm fire.

Jim and Edith’s budding relationship is developed rather charmingly. The recurring musical motif of Goodnight Sweetheart is a nice touch from Fred Steiner and helps to bolster the romantic mood.

The happy times they spend together makes the sucker punch in which Spock sees two futures for her (one where she lives, the other where she dies) all the more powerful. Even with a third of the story to go, it seems horribly likely that Edith will have to be sacrificed in order to put time back on the right lines again.

We then learn that Edith Keeler will later form the peace party and inadvertently help Hitler win WW2. Needless to say this is a tough thing to swallow (little Edith did that all by herself?) but it has to be something that substantial to explain why Kirk would be prepared to let her die.

The ending is as gut-wrenching today as it no doubt was back then. Shatner is spot on as Kirk wrestles with his dilemma – if he saves Edith then he will condemn countless unborn millions to death. We know that Kirk will do the right thing, but it’s plain that the cost will hang heavy with him. Shatner doesn’t overdo it, but still does enough to convince the audience that Kirk is a shattered man by the time the credits roll.

Few Star Trek episodes end in such a downbeat fashion as this one, but any attempt to lighten the mood just wouldn’t have worked. For all that the script was a heavily rewritten compromise, it still stands as one of the finest from all three series. 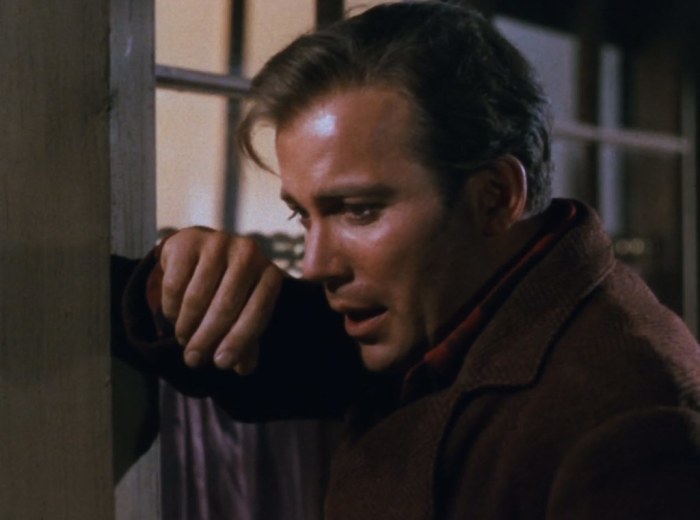