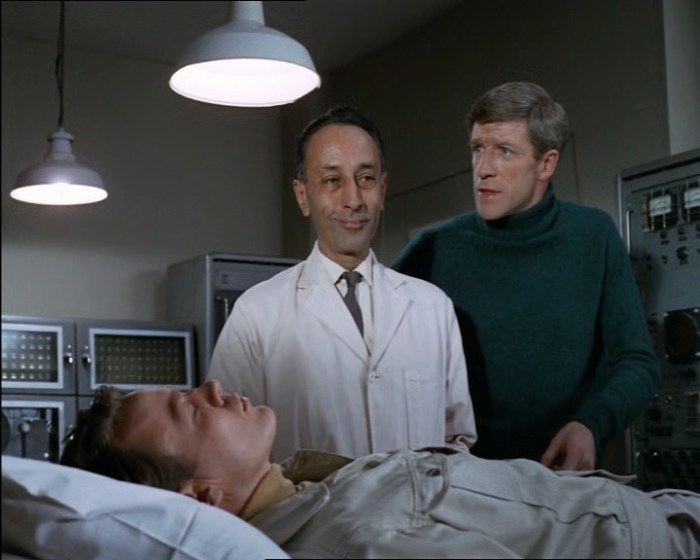 The submarine Keppel, feared lost at sea, pulls into Galway Bay. A grisly discovery is made – the crew of 150 have all died from heart faliure. The Champions join a fresh crew and set out to retrace the Keppel’s last, fateful voyage. They discover a remote island stocked with weapons of mass destruction and a very mad scientist …

This is another of those Champions episodes which could easily have fitted into Department S. The way that the crew perish in such mysterious circumstances – they’re still at their posts (the captain peering through the periscope, for example) – is just so Department S. How can this have happened? Will there be an explanation or will the episode just hope we’ll forget about it? Hmm.

The post credits sequence sees Richard, Craig and Sharron at a funfair. The boys ogle a pretty young lady (Sharron doesn’t look pleased at this) before Craig proves to the pretty young lady that he’s a whizz at hoopla. That’s not something you see in every ITC series.

Uh oh, we’re back at the Holy Loch submarine base. Let’s hope this is a better story than The Search.

Sharon turns some heads at Holy Loch. “Who’s the doll?” wonder the pressmen at the gate, before she warms the cockles of the submarine crew (this is all to do with her short skirt and the way she slowly descends down the ladder into the submarine). The crew on duty (including the very familiar extra Harry Fielder) find it difficult to take their eyes off her.

This isn’t an episode packed with subtle performances. Edmond Knight is rather hammy as the Minister, as is Mame Maitland as the amoral scientist Minoes. James Maxwell, as the mysterious stowaway Stanton, is better though.

Mind you, the reason for his presence on the submarine is a little nebulous. He’s clearly in cahoots with the people on the island, but why hitch a lift back there? It’s not as if he attempts any sabotage en route – at least not intentionally.

Although all three Nemesis operatives are on the sub, they’re sadly lacking their usual playful byplay today. Indeed, the tone of the episode is rather grim, although the script isn’t really strong enough to merit this approach. The cutaways to a toy submarine chugging through the water helps to torpedo this serious approach.

The boys set off to explore the mysterious island, leaving Sharron behind in the submarine. Boo! This gives the story a feeling of a series B Blakes 7 episode ….

Edmond Knight’s Minister dies as he lived (in a very over the top manner). We never learn which country he’s a Minister of, only that it’s one shunned by the rest of the world. So they plan to use gas weapons to make the world sit up and take notice. We’ve been here before.

The tag scene raises a smile though. The boys strongly resist Tremayne’s suggestion they undergo a medical following their island gassing. Of course, once they see that the doctor is a pretty young woman they rapidly change their minds. Tremayne seems tickled by this (he winks at Sharron) although she clearly oversteps the mark by perching on his desk in a friendly manner!

So far the evidence seems to be that stories set on submarines end up as disappointments. I’ll give The Silent Enemy a fairly middling two and a half out of five. 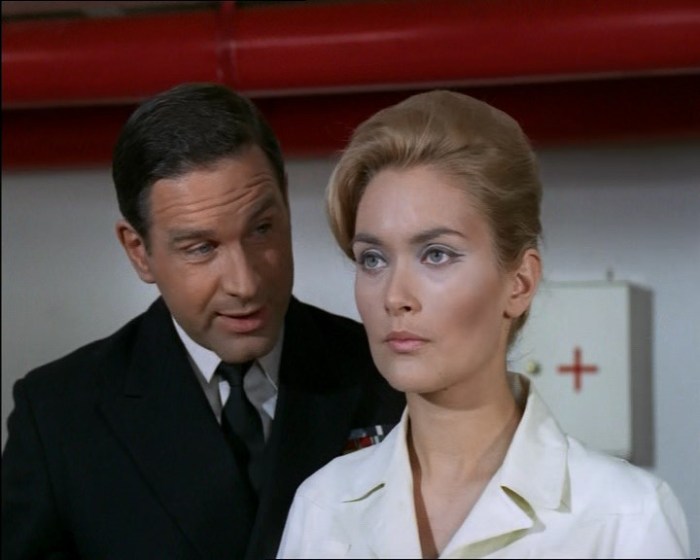