An GPU agent called Semekin (George Roubieck) is murdered in his Jamaican hotel room. His pocket contains a curious newspaper clipping which reads ‘Wanted: A parrot that speaks Greek. Reply box 666’. Even more curious is the fact that the sixes have been changed to eights. Deciding that this must be a code, Craig travels to Jamaica in order to replace Semekin. And that’s when the trouble really begins ….

I do love the fact that if the brief stock footage clippage of Jamaica at the start of the episode wasn’t quite enough, the incidentals then decide to go into steel band mode – after all, every little helps. A real steel band pops along later just to hammer the point home.

Poor Semekin only manages to lock lips with the very winsome Cleo (Imogen Hassell) for a few seconds before her boyfriend breaks into Semekin’s hotel room and chucks a knife straight at his back. It’s a remarkable piece of marksmanship, although maybe that’s just because the camera angles were slightly askew.

Craig handles today’s superpowers demonstration scene. He’s out in the countryside with a blonde, leggy lovely (who doesn’t look too dissimilar to Sharron – hmm) and proves that finding a wristwatch dropped in the middle of a field is no problem when you’re a Champion.

The newspaper clipping leads Craig to a shop in Jamaica run by Nikko (George Murcell). I don’t know what Murcell’s had slapped on his face (some kind of orange boot polish maybe) but it doesn’t really help to convince that this British actor is actually Greek. Ah well, that sort of thing was par for the course with this era of television (the acting pool being somewhat limited).

If the sight of an orange Nikko is a little off-putting, then Jules (Anton Rodgers) is slightly more palatable – although his moustache can’t help but catch the eye. His silly accent is a bit of a problem too, but then this is a story with several silly accents ….

When I get to the middle of an episode, my thoughts often turn to plotting.  I can accept that Craig’s been sent in to pose as Semekin’s replacement, but why has no thought been given to stopping Semekin’s actual replacement turning up? Because this isn’t done, Craig’s quickly rumbled (and chucked out of an aircraft by Jules for his pains).

What’s rather nice (and unusual) is the fact that Jules is working with Corinne (Nike Arrighi), who proves to be rather more resourceful and cool in a crisis than he is. She’s the one who shoots Craig, takes over control of the plane and orders Jules to dump Craig with immediate effect.  Females in the Champions-verse are rarely so proactive.

This may be an episode which features Craig heavily, but Richard and Sharron aren’t totally ignored. Sharron’s the one who’s able to establish that Craig is somewhere out in the ocean (Richard’s not picking anything up at all – so it was lucky Sharron came along for the ride).

Sharron also proves her worth by pumping Jules for information. Although first Richard tells her to go back to her hotel room and change into something extra slinky before unleashing her feminine wiles on him. Jules is obviously instantly smitten (well, who wouldn’t be?). Their scenes together are slightly torpedoed by Rodger’s French accent though – the more he speaks, the harder it is not to think of Inspector Clouseau.

It takes a long time before the mystery at the heart of the episode (what is Jules searching for?) is revealed. And to be honest it’s not really that interesting or exciting, so we’re left with a faint feeling of anti-climax when the beans are spilled.

But the episode’s not a total write-off.  Sharron’s seduction of Jules is something of a highlight – especially when he gets her back to his hotel room and decides that a kiss would be nice.  As he moves in (and Sharron decides to lay back and think of Nemesis) we cut to a shot of Nikko shovelling food into his mouth.  We then go back to find that Sharron has hypnotised Jules.  Rodgers plays dazed and almost unconscious very well (as we’d see later in his career, he was a fine comic performer).

The irony is that even after all that effort, Jules didn’t tell her anything. So what have we achieved? Absolutely nothing. Still, as padding goes it was rather entertaining.

Craig washes ashore on an island and is discovered by Clive (Linbert Spencer).  Clive then just happens to lead him to the plane which Jules has been searching for. This is a spot of dodgy plotting that’s hard to beat whilst the tiny studio island also requires the viewer to be in a forgiving mode. Clearly Reply Box 666 was something of a cheapie – no location filming and presumably most of the sets taken from stock.

This isn’t the series at its best then, but it’s still entertaining enough, so I’ll give it three and a half out of five. 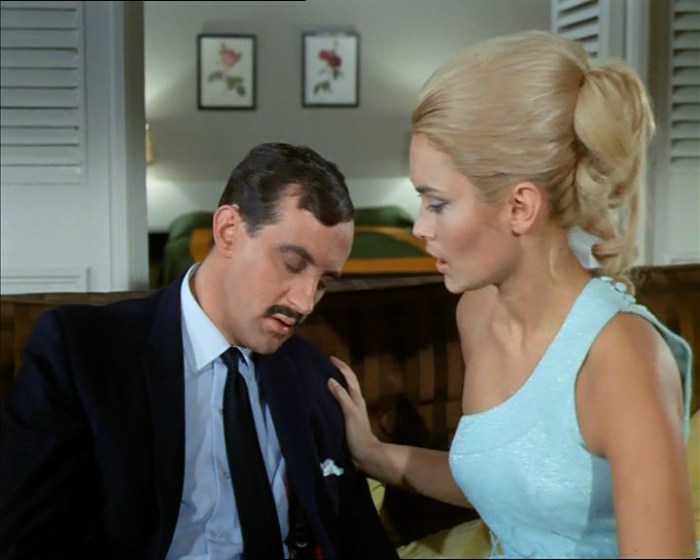