Skip to content
HomeDoctor Who – The Chase. Part Four – Journey into Terror 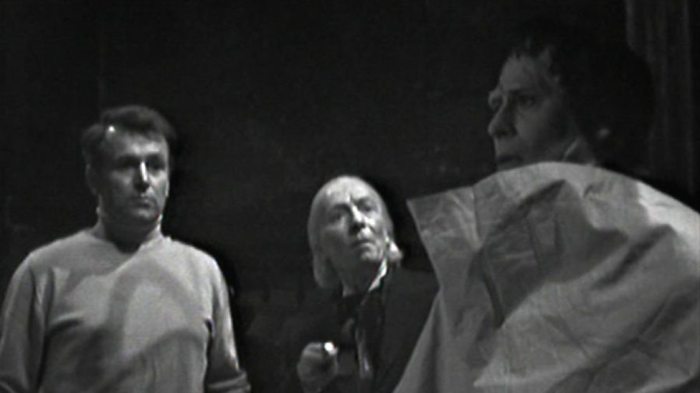 Journey Into Terror (yet another generic Terry Nation episode title) is pretty poor stuff.  Technically it’s very sloppy (watch out for the camera at the top of the stairs about five and a half minutes in). There’s another problem a few seconds later when a Dalek is revealed.  But the Daleks haven’t arrived yet, so this prop shouldn’t have been in shot. Oops …..

The script had a rather confusing genesis.  Terry Nation originally conceived the haunted house as only existing in the imaginations of the four time-travellers (and there’s a remnant of this in the script since that remains the Doctor’s theory).  Nation then muddied these waters in the draft script when the Daleks announced that the TARDIS had landed in Transylvania – implying that the Doctor was preparing to meet the real Count Dracula.  In the end the script was redrafted to explain that everything they see is nothing more than an elaborate funfair attraction.

Which is closed.  So why is the power on and why are the various (very realistic) mechanical monsters moving about?  Also, why do they develop homicidal tendencies?  Maybe that was the reason why the attraction was closed down.  I love when Barbara asks Vicki if she thinks whether “there’s something strange going on around here?” That’s after they’ve both met Count Dracula, so it’s a fair bet that something’s not quite right!

By now, the pattern of events should be clear.  The Doctor and his friends arrive somewhere, look around and leave.  The Daleks then turn up (they’re always just a little behind the TARDIS) curse that they’ve missed the Doctor yet again and get into a tussle with the locals.  If the Daleks have a time-machine why are they always a few minutes behind the TARDIS?  This makes no sense, but The Chase isn’t a story that makes a lot of sense anyway.

A little wrinkle is added after Vicki is left behind (she’s forced to take refuge in the Daleks’ time machine).  It’s rather remarkable that the others don’t twig she’s missing straight away. Nation would do this again a decade or so later in the Blakes 7 story Seek, Locate, Destroy where Cally went AWOL for a long time before anybody noticed.

The Daleks’ next wheeze is to create a robot copy of Doctor Who.  It’s identical to him in every respect (at certain angles anyway, at others it looks nothing like him).  This is another of those script ideas that just doesn’t work.  Had Hartnell played both the Doctor and his double all the time (with split screen filming for the scenes where they meet) then they could have pulled it off.  But Richard Martin bizarrely elected to use shots of Edmund Warwick dressed as the Doctor, badly miming Hartnell’s pre-recorded dialogue.  Does this convince?  Umm, not really.

It’s true that split-screen would have probably been outside of the programme’s budget, but it’s baffling why the script wasn’t tailored to enable Hartnell to play all of the robot scenes at the end of this episode.  Instead, we have shots of Warwick miming, which then changes to a close up of Hartnell.  Hardly the most impressive of cliffhangers.

2 thoughts on “Doctor Who – The Chase. Part Four – Journey into Terror”