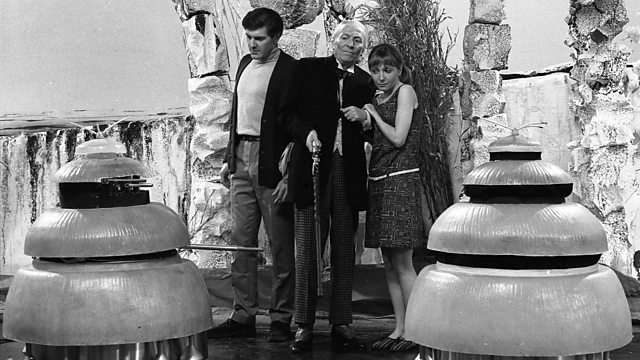 Galaxy 4 opens with a scene of domestic life aboard the TARDIS – Vicki is cutting Steven’s hair. Does she also trim the Doctor’s I wonder? But musings about the barbering requirements aboard the ship are (ahem) cut short when they land on what appears to be a completely deserted planet.

The Doctor is convinced there’s no life out there. Ooops. Just a minute later a strange robot is observed slowing moving around the TARDIS. Later Doctors tended to verge on the omnipotent, but this moment is a reminder that the original Doctor didn’t have all the answers (and also had the good grace to admit when he was wrong).

Vicki’s delighted with the small robot, nicknaming it a Chumbley, because it has a sort of chumbley movement. No, me neither. But it’s as good a name as any and it’s helpful to have the device named since it instantly imbues it with more of a personality.

So far we’re about eight minutes in and the story has proceeded in a leisurely fashion. Things start to pick up when two blonde women throw a net over the hapless Chumbley. Steven’s all over them in a rash. “Aren’t they a lovely surprise” he coos and when they introduce themselves as Drahvins he responds “and very nice too.” A smooth talker, that boy.

This early scene helps to establish that there are two factions on the planet – the Drahvins and the Rills (who control the Chumblies). The Drahvins view the Rills with extreme loathing. “They are not people. They are things. They crawl. They murder.”

I wonder if the story was asking the audience to assume that the Rills were evil and the Drahvins good? But since the script makes it plain that both the Doctor and Vicki view the Drahvins, even after this initial meeting, with suspicion that doesn’t seem to be so. They might be superficially attractive but there’s an unsettling coldness to them.

This does sap the suspense somewhat – it may have been more interesting for the Drahvins to be presented as welcoming and friendly, with their true natures only slowly revealed. Of course, another avenue to explore would have been if both sides were as evil and warlike as each other – meaning that the Doctor and his friends were caught in the middle with no potential allies.

Until the recovery of episode three, Airlock, the only surviving visual material had been a five minute excerpt from this episode. After the static nature of the recon, it’s nice to have moving pictures again (albeit briefly) as the Doctor and the others meet the leader of the Drahvins, Maaga (Stephanie Bidmead). She rules her subordinates with fear, but is cordial with the Doctor, no doubt because she believes he could be of some use to her in the war with the Rills.

Maaga chats a little about her home planet, which adheres to various SF clichés. “Oh, we have a small number of men, as many as we need. The rest we kill. They consume valuable food and fulfill no particular function.” Most of the Drahvins are clones – only Maaga is a real person, the rest are bred to fight and die (which handily explains their wooden delivery and lack of spark).

With the planet due to explode in fourteen dawns time, Maaga has a problem. Their ship is damaged, so she has to find some way to force the Rills to take them (or destroy the Rills and commander their ship). If the episode has proceeded in a rather leisurely fashion so far, then the revelation that the planet will actually explode in two dawns does add a little urgency to proceedings ……