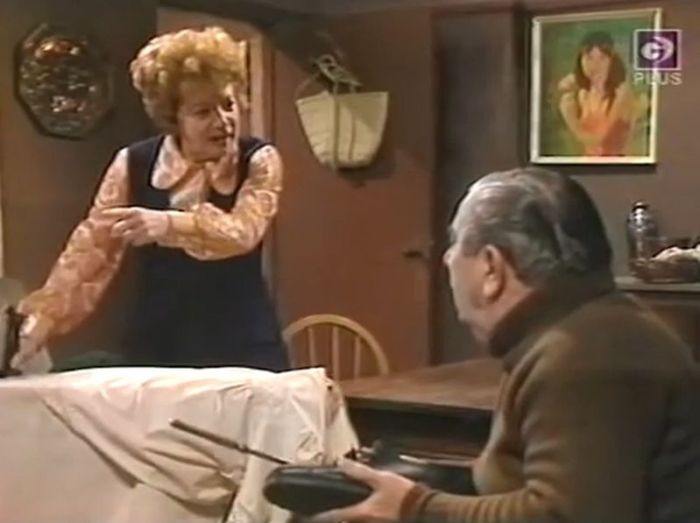 The episode opens with a typical picture of domestic contentment chez Ogden. Hilda’s ironing her unwanted smock whilst Stan’s pushing a poker down his shoe (don’t ask).  Stan – engrossed in his work – asks Hilda to give him a rest. Uh, oh, he shouldn’t have said that.

“Give you a? Give you a rest? Look, it were hardly coming up to twelve when you come in for yer dinner and now it’s nearly gone three. Mind you, I do understand your difficulty. I mean what with your dinner breaks and your cups of tea and your flitting in and out of the Rovers and putting your bets on and filling your bucket everywhere, you’re hard pushed to fit in a rest aren’t yer?”

This monologue does serve a plot purpose as well as simply providing the viewer with some entertainment. Hilda – distracted by having to harangue Stan for the umpteenth time – doesn’t notice that the iron’s been left on the smock (burning something of a hole in it). How will she be able to return it now and convince an unfriendly Elsie that it’s never been worn?

She tries her best, but Elsie’s having none of it. Indeed, she relishes humiliating Hilda, who goes away chuntering as always. Once again, I can’t help feeling a little sorry for Hilda – if it hadn’t been for Gail’s distracted recommendation then Hilda probably wouldn’t have bought the top in the first place.

Hilda returns later, but Mrs Matthews is also steadfast in refusing a refund. So Hilda does what Hilda does best – when cornered she comes out fighting (and in an especially vindictive manner). She tells Mrs Matthews that one of her employees was had up for shoplifting. Long term viewers will know that she’s referring to Elsie (and also that Hilda can never resist sticking the knife into Ms Howard) but Mrs Matthews is less clued up on Coronation Street history – and so looks askance at the innocent Gail ….

This not only upsets Gail, but also infuriates Elsie, who’s more than a little annoyed that this piece of ancient history is dragged up again (even though she was cleared of any wrongdoing). Mind you, if she hadn’t been so uppity with Hilda then none of this would have happened, so the blame has to be shared a little.

Terry’s sister – Renee – is mentioned. Although we don’t see her today, she sounds like a formidable dragon (Terry tells Ray that she’d eat him on a cream cracker!). Cripes, I wonder what she’s like?

It’s the semi-final of the Superbrain competition. Bet – although she’s come dressed to impress – fails to reach the final.  There’s some consolation for her though, as the quizmaster, Philip Lightfoot (the very recognisable Geoffrey Bateman) offers to take her out ….