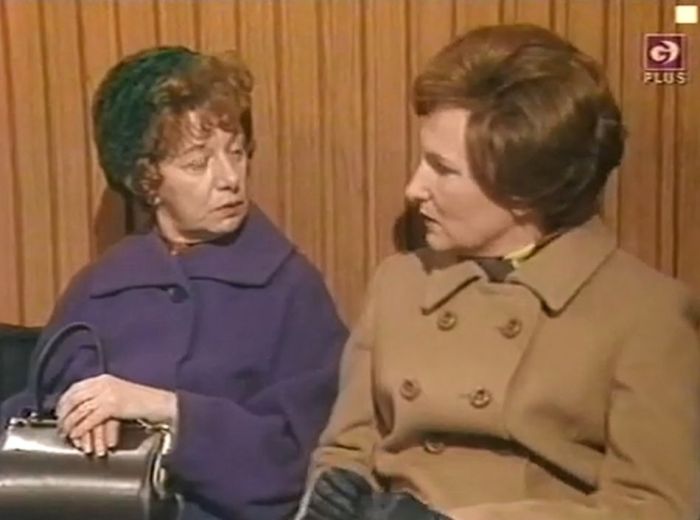 Having had a bit of a break, I’ve recently picked up my Coronation Street rewatchathon from January 1978 (at the rate of two episodes per evening).

The trial of Ernie Bishop’s killers, from mid March 1978, has been an interesting storyline. This was partly because it allowed the topic of capital punishment an airing (most of the residents were in favour although there were some voices raised against). One naysayer was Emily, who reacted with characteristic quiet dignity when Ivy blithely shoved a petition under her nose.

We never actually saw the trial (the viewers got no further than the corridor outside the courtroom). It’s hard to image a soap opera today not milking this scenario for all it was worth, but there’s several possible reasons why the 1977 Street decided to be more discrete.  I’ve a feeling that it may just have been budget related – a one-off courtroom set might have been too expensive to build (ditto filming on location).

The audience doesn’t lose too much by having the events reported second hand though. Indeed, the endless sitting about and waiting for something to happen is nicely captured. When Betty caustically wonders if Hilda would be taking her knitting, it deftly creates the image that she was attending purely out of ghoulish curiosity (although since Hilda was quite happy to sit and keep Emily company maybe we shouldn’t judge her too harshly).

The mother of one of the accused – Mrs. Lester (Penny Leatherbarrow) – is also at court, and her close encounter with Emily is another fascinating moment. The pair are briefly in the same space but don’t talk to each other (which might seem like a missed opportunity, but I think things play out better this way).

Emily slowly realises that even the successful conviction doesn’t offer her any closure (with good behavour, the pair might be released in ten years time). Long-time viewers would be rewarded though, as Ernie’s killer returned in 2005 and 2006, now a changed man and seeking forgiveness from Emily. Nearly thirty years is an incredibly long time to wait for a storyline pay-off, but it was appreciated by this viewer.