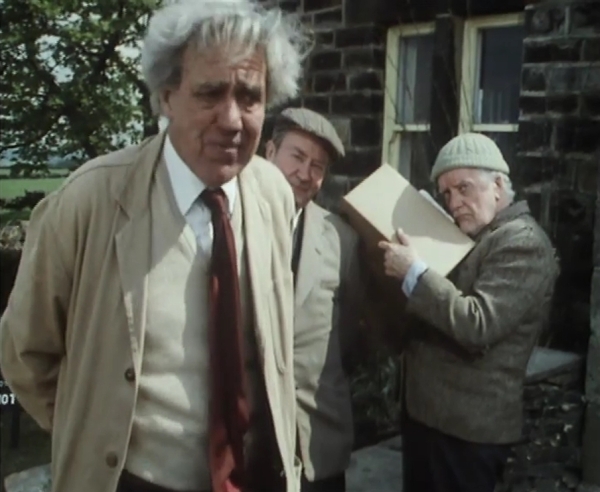 Happy New Year. Surprisingly held over from Christmas week, today the feature length Last of the Summer Wine special Uncle of the Bride finally airs. We’re into the era where it’s been noted that the supporting cast began to snaffle a little more of the limelight (although to be fair, this had been happening ever since the first series) and Seymour (Michael Aldridge) makes his debut.

Seymour obviously had to be a different character from Foggy and although eventually the series would end up in a rut (many episodes during the next few years revolved around Compo being used as a guinea pig for Seymour’s latest impractical invention) it’s impossible not to enjoy Aldridge’s turn.

BBC2 offers a couple of films that are worth VCRing – The Front Page with Jack Lemmon and Walter Matthau followed by the Marx Brothers’ Animal Crackers.

I continue to lament that there’s not more of A Frame With Davis in the wild, so until the happy day when the whole series suddenly appears we’ll have to make do with fragments like this.

C4 offers a very solid evening. First up is Mr Parnes, shillings and pence, a film documentary about Larry Parnes – Britain’s most notable pre-Beatles pop manager. That’s followed by Blue Suede Shoes (although this show has had a few different names over the years) in which Carl Perkins corrals a group of his famous friends – George Harrison, Ringo Starr, Dave Edmunds, Eric Clapton – for an hour’s worth of good-natured rockabilly. Then there’s episode one of Unknown Chaplin, Thames’ top-notch three part documentary series.