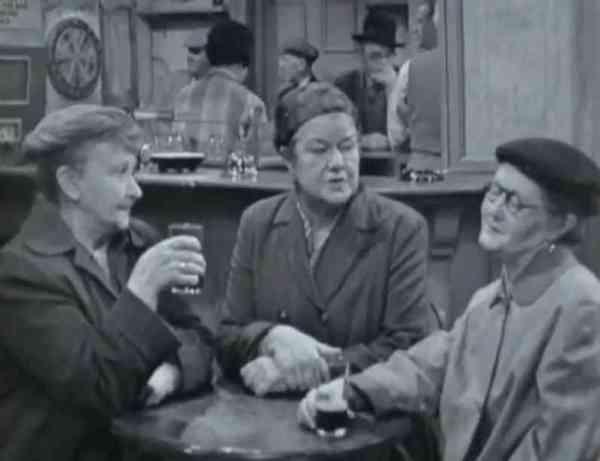 Frank Barlow’s stern words, during the previous episode, about never buying anything on credit comes back to haunt him when it’s revealed that his wife, Ida, has had items on tick from the local tally man, Johnny Gibson (Gerald Cowan). It’s pretty modest fare – seat covers for the front room suite – but Gibson’s visit to No 3 doesn’t go unnoticed by Ena who (unsurprisingly) has a few choice words later in the Rovers’ snug regarding Frank’s apparent hypocrisy – loudly proclaiming about the evils of credit whilst sneakily indulging,

Ah, Ena. This is an episode dominated by the snug musings of Ena, Martha and Minnie. With Ena slow to make an initial appearance, it allows Minnie and Martha to indulge in some gossip about their friend – was she really the one in charge during the recent gas leak evacuation at the Mission? Ena’s sudden arrival is beautifully timed, as is Minnie’s change in expression from delighted expectation (as she anticipates hearing the truth about her friend’s conduct) to downcast sorrow as Ena turns up and they have to hurriedly change the conversation.

The dialogue drips with quotable gems (“there’s only one set of folk that doesn’t get talked about and that’s them as does nowt”) and monologues (Ena’s bus travails). All three initially fall into their default positions. Ena is forthright and domineering, Martha is acidly disapproving of everything while Minnie is vague and always keen to steer their conversation down weird tangential alleys.

Maybe it was Lynne Carol’s relative youth (she was 46 at the time this episode was recorded, considerably younger than Margot Bryant or Violet Carson) but there’s often something about Martha that rings false with me – it’s an excellent performance, but it always feels too much like a performance for comfort.

I love the way that the normally pliant Minnie suddenly takes charge (“sit down Ena and don’t be so touchy and you shut up Martha”) to the shock of her two friends. Even better is the way that neither Ena or Martha feel able to comment on this, merely exchanging a startled look as the conversation resumes.

There’s more discord between Elsie and Dennis. Their latest row results in Dennis getting a slap, although I find it hard to believe in Elsie’s comment “that’s what you’ve been missing all your life”. Everything we’ve seen to date of her suggests that she would have been quite happy to give the young Dennis a slap or two in years gone by.

The intensity of this moment is then allowed to dissipate a little as he finally reveals where all his money has gone – to a striptease artist called La Composita (real name Joyce) whose act involves a snake. Already Dennis’ flirtation with the entertainment world is up and running with many, many delights (such as a couple of Sea Lions frolicking in the Rovers’ bathtub) to come.

Elsewhere in the episode there’s two brief highlights. One is the first appearance of Brian Mosley as Alf Roberts. It’s just a short scene – he’s only present so that Frank will have someone to pour out his troubles to – but it’s the start of a healthy run in 1961 as a supporting character (clocking up 21 episodes in all). During the rest of the sixties his appearances would be more intermittent (4 in 1962, 11 in 1963 and then he’s not heard from again until 1967 when he notches up a further 9 episodes before finally returning in 1971 as a regular).

Another familiar face is that of Prunella Scales as Eileen Hughes (making the third of four appearances). She pokes her head round the Rovers’ door just as the big darts match is in progress. This is enough to put Harry Hewitt off his stroke, especially when he learns that she’s the mascot of the rival team …