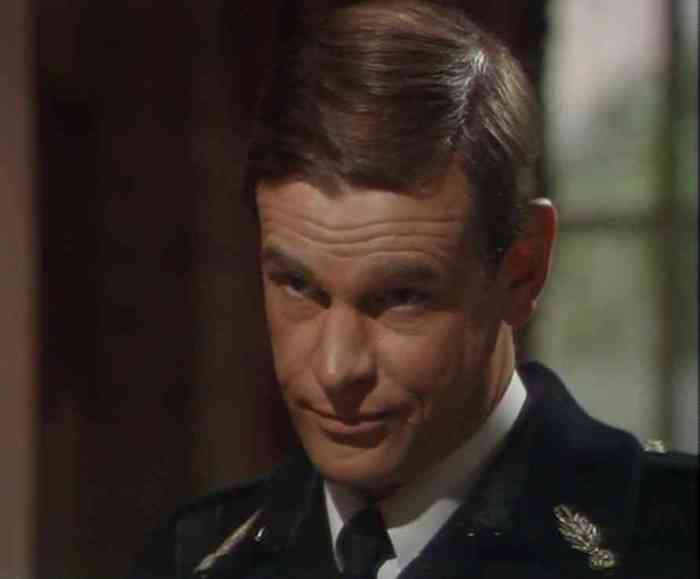 Brandt is given an article written by an American airman who escaped over the Pyrenees. Although the writer changed many details in order to safeguard the identities of the people who helped him, Brandt still believes that he can use it to pinpoint the escape line. So he travels into the French countryside, meeting up with a policeman called Malaud (Ian McCulloch) ….

If you watch enough of Gerard Glaister’s series, then you’ll see the same faces cropping up time and time again. That’s evident today, as Child’s Play’s key role is taken by Ian McCulloch, who had previously appeared in the Colditz episode Odd Man In.

Coincidentally (or maybe not) both episodes were written by Arden Winch.  This would be his only Secret Army credit, but he’d work with Glasiter again (in 1981 for example, writing the six-part thriller Blood Money which starred a gaggle of former Secret Army actors – Bernard Hepton, Juliet Hammond-Hill and Stephen Yardley).

Child’s Play is an oddly static tale. Several lengthy two-handed scenes between McCulloch and Michael Culver take up a fair amount of its running time – but whilst on the surface everything seems fairly mundane (Brandt and Malaud slowly debating where the safe house could be) the combative interaction between them is very nicely done.

Unlike Kessler, Brandt is conciliatory – happy to pay for information that leads to the arrest of British airmen. Malaud, a capable officer exiled to a countryside backwater because of his ‘crime’ of speaking his mind, seems initially reluctant to help – but eventually does so. Not for money (to Brandt’s surprise) but simply as a way of proving to his superiors that he’s still a good policeman.

Malaud is outspoken in his loathing of the Gestapo (understandable, since they’d previously pulled out his fingernails). Kesller wouldn’t have stood for this sort of talk, but Brandt (of the Luftwaffe) just lets it go by. It’s an early indication that Brandt is no fanatical Nazi, unlike his Brussels colleague.

We meet Sophie and Madeline Chantal (Mary Barclay and Ruth Gower) for the first time. A pair of elderly sisters, they’re an important link the escape route – Madeline is the suspicious one, whilst Sophie is warm-hearted and welcoming (always keen to greet new airmen and sorry when they have to leave so suddenly).

As for today’s airmen (played by Jonathan Coy, Jonathan Darvill, Nigel Greaves and Richard Reeves) they’re fairly anonymous types – albeit several are rather boisterous and irritating. Maybe this was intentional, although it means that when Brandt and Malaud capture them I can’t confess to being too upset.

Thankfully they’d left Sophie and Madeline by then, so at least the sisters live to fight another day.

Given that earlier in the episode Malaud was very pessimistic about locating the safehouse, it seems a little hard to swallow that he later pinpoints it without too much trouble. But it does mean that the pace dramatically lifts during last fifteen minutes, as Lisa is forced to abandon the airmen to their fate whilst she goes into hiding with Baroja (Ken Stott). Later, they’re discovered by Malaud ….

Back in Brussels there’s not too much to report. An unseen Andree contains to cast long shadows over Albert and Monique. It’s fascinating that she won’t actually reappear in person until episode thirteen, but a few knocks on the ceiling means that her presence is still well and truly felt today.

James Bree and Maria Charles share a nice scene in which, once again, Louise expresses her fears for her husband and her niece. In retrospect, knowing how things turn out, these moments carry a little extra weight.

Thanks to Ian McCulloch in full-on brood mode, Child’s Play isn’t without interest. It’s not the best that the series had to offer, but Arden Winch was one of those writers who, over the course of twenty years or so, contributed to a varied selection of drama series, so any examples of his work will always be of interest.  It’s slightly surprising that he never wrote for SA again, as his work on, say, Manhunt and Colditz suggest it would have suited him very well.