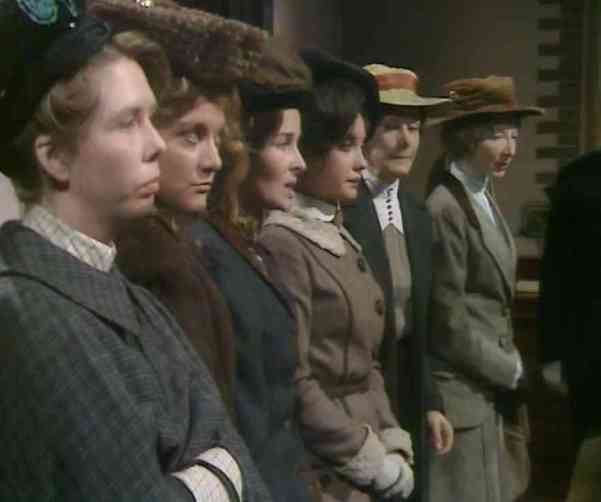 For the first time in a little while, the relationship between Miss Elizabeth and Rose forms the centrepoint of an episode. Time hasn’t softened Elizabeth at all – she’s still hopelessly self-centered (refusing to visit her daughter at the seaside) whilst it’s notable that Rose seems more inclined to speak back to her (“my Rose has thorns”, comments Elizabeth early on in the episode).

Possibly this is because virtually all of the household are in Scotland, with only Elizabeth from upstairs and Rose, Edward and Ruby remaining from the downstairs staff. Rose therefore is keen to keep things running smoothly with a reduced staff, although she couldn’t have predicted quite how things would turn out ….

In an episode light on levity, there’s one brief bright spell early on – Ruby makes a cake, all the time carrying on an imaginary conversation with the absent Mrs Bridges (at one point calling her a cow!). This jollity soon dissipates once the main plot kicks into gear though.

Inspired by her friend Ellen Bouverie (Claire Nielson), Elizabeth has become a suffragette – throwing herself into their world with enthusiasm. Although their aims are laudable, others – especially Rose – react with horror. Elizabeth later comments that she finds that her life is now exciting.  But with Rose deciding that the suffragettes are simply her new toy, it’s impossible not to draw the conclusion that Elizabeth is nothing more than a dilettante – looking to fill her aimless life with some purpose (for the moment the suffragettes have filled that hole).

Upstairs Downstairs tended to use videotape for its location film work, but this episode featured night filming. I’m glad they spent the money, as it adds a little extra gloss to the scenes of the suffragettes, led by Ellen and Elizabeth, gleefully trashing the house of Arthur Granville, M.P. (Harold Innocent). Rose, tagging along in a vain attempt to keep Elizabeth out of trouble, is arrested with all the others and that’s where the trouble really begins.

Elizabeth is spared jail-time thanks to the intervention of Julius Karekin (Donald Burton) but Rose is not so fortunate – she faces the unnerving prospect of two months in Holloway Prison. Elizabeth retires to Julius’ palatial house for tea and acid banter (she’s more than a little miffed that he’s prevented her from becoming another suffragette martyr).

At this point in the story, Elizabeth does express concern about Rose’s situation, although she makes no particular move to win her freedom. Had she called her father then no doubt he could have pulled some strings, but Elizabeth is keen to keep this from him (swearing Edward and Ruby to secrecy). And it says a great deal about her character (none of it good) that she couldn’t be bothered to visit Rose in prison.

When the by now wretched Rose hears that she’s got a visitor, she eagerly rushes out (expecting it to be Miss Elizabeth). The sight of Edward and Ruby is small comfort, as is the cake brought by Ruby (Rose has been forced by the others to undertake a hunger strike).

And this is where the story gets even darker, as the women are later force-fed with a tube (either down the throat or up the nose).  Whilst we don’t see it used on screen, Ellen’s later description of it (and the hoarse voices of the women after their “treatment”) more than adequately paints the picture.

These prison sequences – despite the odd wobbling wall – are pretty uncompromising, and since the blameless Rose is one of those suffering there’s even more impact. Luckily, both for Rose and the audience, the suffragettes are released shortly afterwards thanks to the intervention of Julius (spurred on by Elizabeth’s description of their plight).

And although a seemingly chirpy Rose tells Elizabeth that she’ll be “right as a trivet” once she’s had a cup of tea, the fact that the episode ends with Rose – all alone – dissolving into tears, tells its own story.

Elizabeth and Julius disappear upstairs. Elizabeth might have displayed contrition to Rose and agreed that the life of a suffragette wasn’t for her, you don’t really get the feeling that she’s learnt anything from this adventure. Indeed, as has happened previously, she simply blithely sails on – unheeding of the damage left behind her.

It’s not jolly Sunday evening fare, but A Special Mischief lingers long in the memory. With only a small regular cast, there’s room for some nicely judged guest performances (Rosamund Greenwood, Veronica Doran and Deirdre Costello as three of the more prominent suffragettes, for example).

One thought on “Upstairs Downstairs – A Special Mischief (29th December 1972)”