Skip to content
HomeOut of the Unknown – Beach Head

Tom Decker (Ed Bishop) is a veteran of space exploration and at first, planet 0243/B seems to be just another regular mission.  0243/B is the 37th such planet that Decker has landed on, and on all the previous planetfalls he says that there has been “no discovery, no phenomenon, that has not had a logical or a technological cause or explanation”.

The job of Decker and his crew is to land, establish a Beach Head (a protective ring of steel) and then collect data about the planet which is then transmitted back to Earth.  But things begin to go awry after Decker starts to act oddly, which concerns Dr Jackson (Helen Downing).  Then the crew encounter a native life-form, who tells them that “You cannot leave. You will never leave. You will die here”.

Beach Head by Clifford D. Simak was originally published in 1951 as You’ll Never Go Home Again.  In many ways it works as a dark precursor of Star Trek.  Unlike Star Trek, the crew here are unable to deal with the “strange new world” which helps to highlight that the universe is a dangerous place and human intelligence won’t always win through.

Thanks to his starring role in UFO I’ve always loved Ed Bishop and one of the chief pleasures of Beach Head is Bishop’s portrayal of Decker’s gradual disintegration.  I can’t put my hand on my heart and claim that Bishop was always the most subtle or nuanced of actors, but his performance works here, where probably a more naturalistic interpretation would have been less effective.

When the BFI announced they were releasing Out of the Unknown, it was a six disc set with no special features and no remastering.  Very quickly, they received a number of emails from people (like myself) who were pleased to hear that this classic series was finally getting an official release, but also asking if the various clips and audios which existed could be included.

The BFI were also contacted by professionals, such as members of the Restoration Team who had worked on the Classic Doctor Who DVDs (they were able to do a very decent clean-up job on the episodes).  Toby Hadoke contacted them on spec to see if they were interested in commentaries – the BFI were, and within a very short space of time Hadoke (and producer John Kelly) had pulled together an incredibly impressive list of commentators on a number of episodes.

If all this wasn’t enough (as well as a new documentary) the set includes four reconstructions of missing episodes, of which Beach Head is the first.  All four were created by Derek Handley and like all the other special features they had to be produced within a remarkably short time.

Given the time-frame, it’s a very impressive effort.  The number of publicity photographs that exist of Beach Head isn’t particularly large, so the same shots do have to be repeated again and again, but after a while the quality of the story carries you along – so this isn’t a problem.  The story also benefits from CGI work by Stuart Palmer, which helps to fill in some of the more visual sections of the soundtrack.

As for the soundtrack itself, it’s of pretty good quality.  It appears to be a microphone recording rather than direct input (so there are background noises on occasion) but given that until fairly recently it was believed that only a thirty second audio clip existed, the inclusion of a full audio is one of the many highlights of the DVD.

Whilst no recon can ever hope to totally recreate the original broadcast, Derek Handley’s reconstruction of Beach Head does give a very good impression of what it was like and whilst some people may find the reuse of stills to be a problem, it’s worth persevering with as it’s a chilling story, enlivened by Ed Bishop’s performance.

Next Up – The Naked Sun 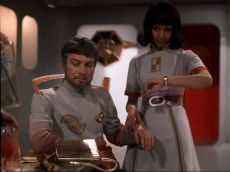 2 thoughts on “Out of the Unknown – Beach Head”