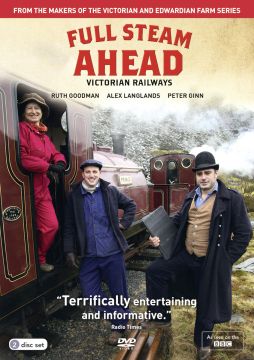 Many people, including myself, have a certain fascination with steam engines.  When the Flying Scotsman made a recent trip through my neck of the woods I did make the effort to see it (although since I have a railway line at the bottom of my garden I didn’t have to venture very far!)

Today it’s easy to view the age of steam through nostalgic eyes – it seems to transport us back to a simpler, slower and less cluttered age.  The reality is very different however.  The steam age heralded an intense period of change in British life – as virtually every aspect (from trade and transportation to health and recreation) was reshaped.

So whilst part of the attraction of Full Steam Ahead is the chance to see an impressive selection of engines chugging their way through the picturesque British landscape, there’s also many painless history lessons to be learnt along the way.

Ruth Goodman, Alex Langlands and Peter Ginn are old hands at this sort of thing (thanks to series such as Victorian Farm and Edwardian Farm).  As with all popular historians they are enthusiastic and engaged, although they also manage to impart a great deal of factual knowledge.  In addition, they delight in attempting many tasks both directly and indirectly connected with the railways.  Driving steam engines is clearly great fun, whilst some of the other jobs are harder and much more labour intensive (a reminder that the railways only came into being thanks to the sweat and toil of tens of thousands of workers).

It’s sobering to stop and think just how disconnected Britain was before the railways.  Since there was no easy way to transport bulky goods and materials around the country, it was perfectly normal that everything a person owned would have been made within, say, a ten mile radius of their home.

The age of steam (and mass production) brought an end to this way of life and created the consumer society.  Now people were able to buy the same goods anywhere in the country and many local trades (thatchers, wheelwrights) began to die out.  When Ruth Goodman says that the steam age had a far greater impact on British society in Victorian times than the internet has in recent decades, it’s easy to see what she means.

Produced in association with the Open University, Full Steam Ahead runs for six episodes, each of sixty minutes duration. The narrator is Philip Glenister.

Episode One – Ruth, Alex and Peter begin their exploration of the steam age by learning how it shaped domestic life, from slate roofing tiles to coal fires.

Episode Two – Alex and Peter become navvys in order to understand precisely how the railways were built.  This episode also discusses how the first passenger trains came into being. I love the notion that it all happened after the railway owners spotted workers hitching a ride on the coal trucks. This created a lightbulb moment as they realised there might be money to be made from ferrying passengers about!

Episode Three – Another way in which the railways transformed British life is detailed here, namely diet.  Before the railways, the country was struggling to feed itself – the age of steam saw a culinary revolution.

Episode Four – Ruth, Alex and Peter take a trip on the most famous locomotive of them all, the Flying Scotsman, to understand how the railways facilitated the transportation and delivery of mail.

Episode Five – Life on the railways before Dr Beeching is looked at, whilst Ruth examines the work of the GWR prosthetic limb department.

Episode Six – The series concludes with an examination of how cheap rail travel opened up freedom of movement for working-class Victorians.  No longer tied to the city or towns where they lived and worked, they could now venture further afield.

Apart from being a visual treat, Full Steam Ahead can also be used as a stepping stone for further learning.  The Open University’s webpage has further reading materials, as well as the chance to obtain a free double-sided poster detailing many of the aspects from the programme.

The DVD includes two special features – a ten minute behind the scenes documentary and a photo gallery.  All episodes are subtitled.

Full Steam Ahead is a fascinating series and comes warmly recommended.  It’s released by RLJ/Acorn on the 5th of September 2016.  RRP £19.99. 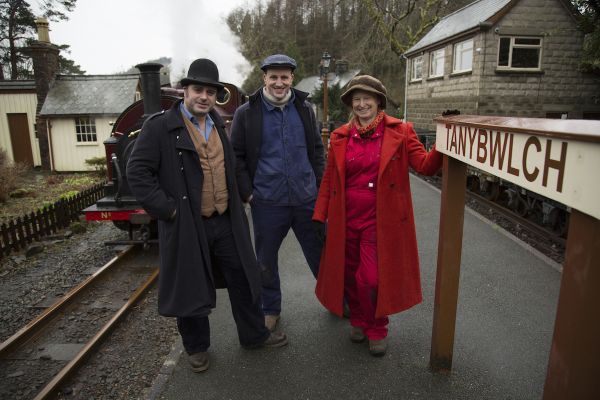