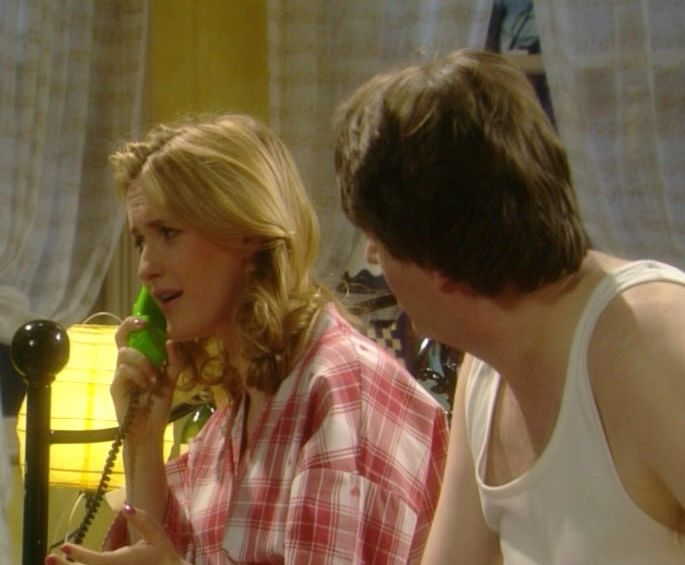 Howard (Merton) and Penny (Katy Carmichael) have spent the evening together, but while they were sleeping a burglar broke in and stole Howard’s suit.  It’s now well past midnight and Howard has to return home to his wife (played by Louisa Rix).  But how can he do so when he’s dressed only in his underwear?

The Suit was originally broadcast in 1969 as part of Galton and Simpson Comedy (just released on DVD from Network) with Leslie Phillips and Jennie Linden as the lovers.

One of the interesting things about PM in G&S …. is the fact that the scripts were, obviously, written for a variety of performers.  Some – like Hancock – were a pretty close fit for Merton’s persona, but others – like Phillips in The Suit – are much more of a stretch.  Leslie Phillips always excelled at playing louche womanisers and it’s plain that (mixed metaphor ahoy) The Suit fitted him like a glove.  It’s slightly harder to accept Paul Merton as a philander though, just as it wouldn’t have been a role which would have suited Tony Hancock.

When Penny mentions how she’d earlier viewed Howard (“suave, sophisticated, unruffled, debonair”) it’s something of a stretch to reconcile this mental image to Merton.  But if we do accept him as a devastating babe magnet, once his trousers are removed he reverts to a much more frantic type.  Penny, puffing on a cigarette, isn’t too much help – now viewing Howard with an air of disfavour.  He’s had his way with her and now he’s attempting to make a speedy exit (or would do, if only he could find some clothes ….)

If we can swallow the central premise of a burglar stealing clothes (true, he does also pinch a few reasonable trinkets, like a watch and a ring), then there’s a decent farce at work here.  And the way that the suit makes a late reappearance, to ensure that Howard receives his well-due comeuppance, is a nice moment.

Carmichael is once again excellent (she’d also played Sandra in The Clerical Error).  After Howard is stripped to his underwear he’s also reduced in stature – which allows Penny to take the dominant role.  And it’s Carmichael who really drives the episode along, partly because Merton seems a little adrift, but also because Howard’s written as a rather ineffectual character.

The Suit may not be top-notch G&S, but Leslie Phillips was still able to make the most of the material back in 1969.  Paul Merton wasn’t as successful, but there’s still some laughs to be had along the way.

The Vicar and his wife (Geoffrey Whitehead and Sally Giles) are anxiously waiting for their babysitter to turn up.  But since they were expecting a woman, the arrival of Paul – in full wise-cracking mode – comes as something of a shock ….

The Clerical Error first surfaced in Comedy Playhouse back in 1963, with John Le Mesurier, although the 1975 remake, part of Dawson’s Weekly, is probably more familiar to most.  There, Les Dawson played the irresponsible babysitter with John Bird as the Vicar.

The Vicar complains that he was expecting an experienced young woman.  “You should have tried the rent-a-blonde escort service then” says Paul.  Both services are available from the same phone number, with Paul’s mother (“Red Maggie Merton. The finest woman ever to bring down three mounted policeman in one charge. She was the one charging”) running things.

Paul’s character is so utterly horrible (his reassurance to the Vicar that he’s “been responsible for more babies than a nine-year old rabbit” doesn’t really inspire any confidence) that it seems odd anyone would leave him in charge of four children – aptly named Matthew, Mark, Luke and John.

But since the Vicar and his wife are desperate to leave for an important dinner with the Bishop, it was clearly Paul or nothing.  Before they depart, Paul continues to bulldoze his way through their lives, lounging in the living room like he owns the place, asking the Vicar to move the television a little and complaining that the drinks cabinet is locked.  He also mistakes the Vicar’s wife for his daughter.  When he’s put straight on this, he enquires if the Vicar has “being going in for a little bit of font snatching? And why not? There’s many a good hymn come out of a good organ”!

With several hours stretching out in front of him, Paul decides to dress up and puts on a dog collar (as you do) which is the catalyst for several different comedy misunderstandings.  Firstly, an attractive young woman, Sandra Evans (Katy Carmichael), comes knocking.  She’s in a distressed state – her ex-boyfriend’s new girlfriend has beaten her up (and after she gave her ex-boyfriend the best two weeks of her life as well) – and is clearly looking for succour elsewhere ….

The arrival of two elderly parishioners (played by Rosalind Knight and Daphne Oxenford) only adds to the confusion.  They spy the slightly undressed Sandra (she was hunting for some new clothes to replace her ripped ones) and are shocked and stunned.   Paul’s decision to open the Vicarage up to a group of homeless people (a Christian act true, but not one that the Vicar will appreciate) and the arrival of Sandra’s ex-boyfriend, looking to duff up the Man of God who took advantage of his ex-girlfriend (of course he ends up throttling the totally innocent real Vicar) tops things off nicely.

If you can accept that anyone in their right minds would entrust the care of children to such an unpleasant force of nature, then The Clerical Error is a highly entertaining twenty five minutes.  Katy Carmichael is deliciously tarty as Sandra and Sally Giles is good as the Vicar’s respectable young wife.  Geoffrey Whitehead, as always, is pitch perfect as the unbending and humourless authority figure, although for once it’s easy to sympathise with his character,  nobody deserves a babysitter like Paul. 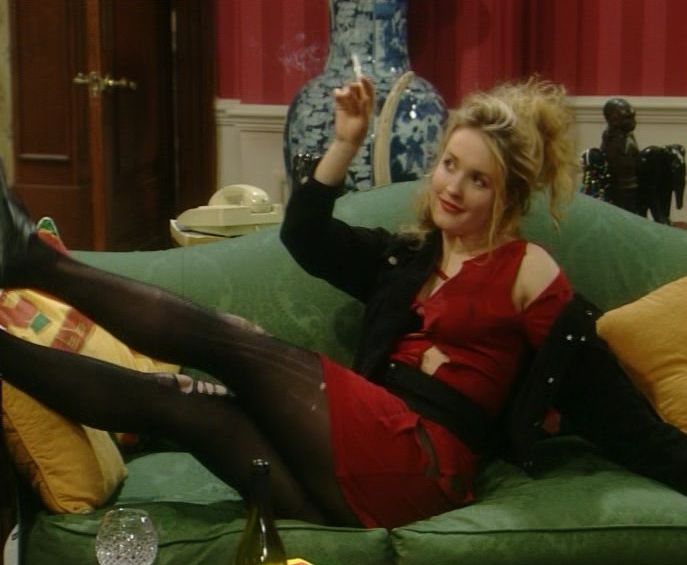