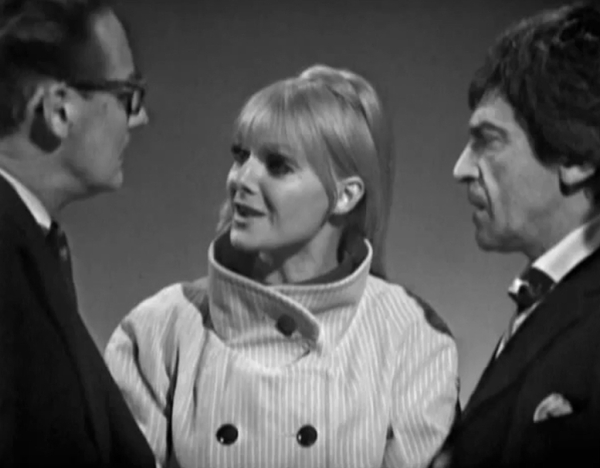 The Faceless Ones is a key story in several respects. Firstly, it sees Malcolm Hulke (co-writing with David Ellis) finally get a Doctor Who script onto the screen. Secondly, the Troughton/Hines double-act really begins to kick into gear ….

Apart from a brief reappearance at the end of the story, Anneke Wills and Michael Craze were written out after the second episode.  Their absence means that Troughton and Hines are required to fill the gap – something they manage very comfortably. Along the way they chuck in various bits of business which more than likely were worked out during rehearsals.

For example, in episode one the Doctor has to give the garrulous Jamie several none too subtle kicks in order to stop him from spilling the beans about the TARDIS whilst in episode two the pair – now hunted fugitives at Gatwick airport – hide behind newspapers, although Jamie’s is held upside down!

It doesn’t sound that much, but these are the sort of touches that time and again we’ll see from the pair over the next few years.  Sometimes they can be self-indulgent, but mostly they’re just nice little moments which often help to perk up a flagging script.

Today’s story is pretty decent, although since it’s a six-parter there’s going to be times when things get a little quiet, so a spot of Troughton/Hines interaction will always be welcome.

The setting – Gatwick Airport – also helps to keep the interest levels up. It’s worth remembering that this sort of thing was still a novelty in the series. After The War Machines, The Faceless Ones was only the second DW story to be entirely set in a bustling modern-day environment.

You can’t quibble with the guest cast either. Colin Gordon is perfectly cast as the Commandant – a weary airport boss who initially finds it impossible to believe the Doctor’s tale of finding a dead body in the Chameleon Tours hangar (although by the final episode he’s become an unlikely ally). It’s not really that fascinating a part, but Gordon was the type of professional able to wring every last drop of exasperation from the role.

Donald Pickering, typecast as usual, is icily evil as Blade, Chameleon Tour’s chief pilot, Bernard Kay adopts a pipe and Scottish accent as the avuncular Inspector Crossland whilst Wanda Ventham doesn’t have a great deal to do, but she’s always going to catch the eye.

If Ventham’s role (as Jean Rock) is fairly forgettable then at least one female guest character gets a good crack of the whip – Pauline Collins as Samantha Briggs. As legend has it, Collins was offered the companion role but turned it down.

In retrospect, I think we dodged a bullet there. It’s impossible to know for sure and had she stayed then the character might have settled down, but I do find Sam to be more than a little irritating. Perhaps Collins was trying just too hard – she’d later reprise her Liverpudlian accent for the first series of The Liver Birds, but here everything just seems too forced.

Given that under Innes Lloyd’s watch we’d already had a cockney companion (Ben) who tapped into the swinging sixties zeitgeist that had seen the emergence of (amongst others) Michael Caine, maybe it’s no surprise that a year later it was felt that, given the ongoing success of the Beatles, a Mersey companion would also be the ticket.

But since the Merseybeat era was long over by 1967, maybe it was a good idea this wasn’t followed through. Post Ben and Polly, most 20th century DW companions turn out to be fairly timeless figures (the groovy Jo is probably the one most rooted in her own time) which helps not to tie them to a specific era. I mean, there’s plenty of other things which date the stories, but at least the companions weren’t often designed as bandwagon-jumping clichés …

Before Polly vanishes at the end of episode two she’s given a handful of effective scenes. Having witnessed a murder in the Chameleon hangar, she’s abducted and apparently brainwashed (the Doctor and Jamie later meet a young woman who appears to be Polly but doesn’t recognise them).  The truth is even more disturbing though – all the time that the faux Polly has been running about, the real one has been locked up in a packing case, unable to move.

Polly’s fate helps to tease out the main crux of the plot. The faceless aliens of the title are taking over the identities and faces of unwilling human hosts.  And whilst the humans are reduced to lifeless dummies (you can imagine from this how the first draft of the story – set in a department store – could have worked out) the aliens now have movement and freedom again (prior to the transference they appear to be in agony and barely alive).

When you start to dig into the plot a little deeper – Chameleon Tours organise foreign trips for young people who are then abducted, taken into space and used as hosts – everything slightly falls apart. Sam (concerned about her missing brother) seems to be one of the few people to have twigged that plane-loads of people have been vanishing on a regular basis.

Other parts of the plot remain opaque as well. Exactly how the horribly scarred aliens are able to ‘grow’ a face identical to their human host within a matter of minutes isn’t made clear. And why are they now replacing key personnel at Gatwick? Given that the game must nearly be up, it seems something of a waste of time (and although they’re shown to have infiltrated key posts, they never seem to do anything except the jobs their human hosts are paid to do).

Dialogue wise, things can be fairly clunky – the Doctor mentions ‘ray guns’ with a straight face whilst Blade (also playing it straight) is gifted lines like “you Earth men are more use to us alive” to the unfortunate Crossland, after he finds himself an unwilling passenger on a very special Chameleon Tours flight.

Although in the interests of fairness, I did enjoy Blade’s comment of “I don’t think it’ll reach where you’re going” in response to Crossland’s warning that the long arm of the British law would be after them.

The Chameleons are the survivors of a non-specific catastrophe on their home planet and require 50,000 humans (that’s an awful lot of charter flights). By the final episode they seem to have acquired their quota and are all set to toddle off home, before the Doctor manages to negotiate an acceptable solution to all.

Despite the fact that the Chameleons regard humans with contempt (“the intelligence of Earth people is comparable only to that of animals on our planet”) and have been responsible for several deaths, he’s happy to let them go free provided they return all the humans to Earth.

This is either another plot oddity or it’s maybe, just maybe, an early example of Malcolm Hulke’s unique Doctor Who worldview. His later stories, the Pertwee ones especially, rarely painted its villains as entirely bad – they tended to be motivated by a range of emotions (fear, pride, greed) rather than simply being evil for evil’s sake. So maybe the Doctor (despite the evidence to the contrary) decides that in time the Chameleons might find a solution to their problem which won’t involve the mass kidnapping of other species.

Hopefully so, because otherwise there’s nothing to stop them visiting another planet and starting all over again ….

So, apart from a nice tag scene with Ben and Polly bidding the Doctor and Jamie a slightly tearful goodbye, that’s that. There’s a lot to enjoy in these six episodes – especially with Troughton leading from the front – but since the story feels a few drafts away from being watertight I can only give it a fairly average 3 TARDISes out of 5. 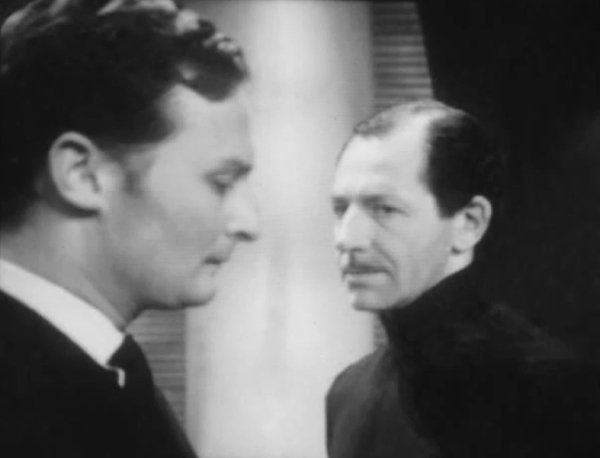