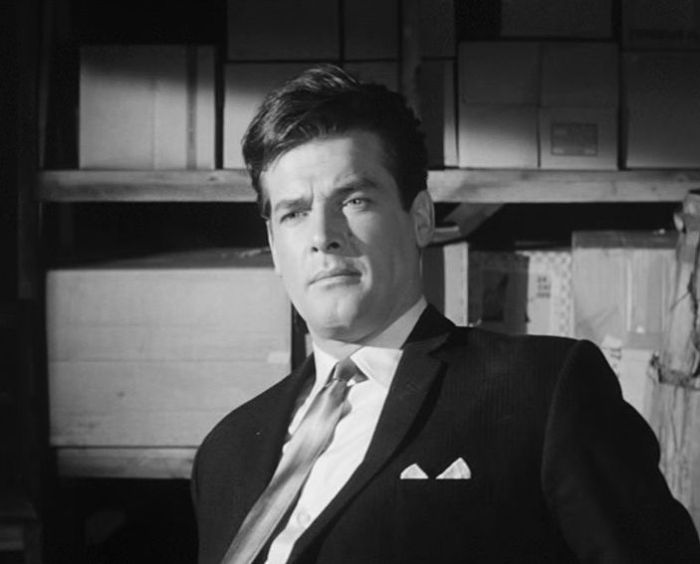 Simon is contacted by a man called Henry Matson (Brian Oulton) who tells him that he’s been forced to steal blueprints from the place where he works.  He and Simon meet in what appears to be a safe place – a deserted bus shelter in the middle of nowhere – but Matson has barely begun to pour out his story before he’s shot dead by a passing motorist.  With his dying breath, he’s able to point the Saint in the direction of the Blue Goose Club and the glamourous Magda Vamoff (Dawn Addams).

Globe-trotter Simon Templar has temporarily come back down to humbler surroundings, as the caption at the start of the story (Stevenage, England) makes plain.  Matson only makes a brief appearance before hitting the dust, but it’s enough to paint his character as a rather quiet, unassuming and insignificant man.  This makes his secret life – cavorting with the fleshpots and gamblers at the Blue Goose – a little hard to accept, but if he didn’t have some weakness (in his case gambling) then he wouldn’t have been blackmail material.

Interviews with Matson’s wife and employer temporarily place Simon in somewhat prosaic surroundings (and it’s rather odd that Simon – rather than the police – breaks the news to his employer that Matson is dead) but it’s not long before the Saint is ensconced in the comfort of the Blue Goose, which is much more his sort of place.

He quickly makes the acquaintance of Magda and elects to adopt the full frontal approach – telling her that he’s a friend of the late Henry Matson.  Since the club is occupied by individuals – such as Hans Blatt (Michael Peake) – who are just itching to kill him, going undercover probably would have been a waste of time.  Plus it would have been much less fun – there’s very much the sense here that Simon enjoys breezing around from place to place, stirring up trouble as he goes.

Magda professes not to know anything about Matson’s death, but can we believe her?  Addams is statuesque, but slightly stiff.  Magda does sport some impressive clothes though – the leopard skin coat and hat combination stands out especially.  She and Simon have a rather nice relationship – it’s all about the subtext – with Simon warily attempting to probe her for information.  At one point, as they share dinner, he casually tells her that she hasn’t told him one word of truth all evening.  She doesn’t take offence at this, so either Simon’s remarkable charm is operating at full strength or she’s so incredibly crooked that she just has to soak up the insults ….

Angus Lennie is good fun as the hotel receptionist, James Andrew MacTavish. I know this will come as a shock, but James is Scottish (no, really).  He’s a helpful sort – passing on messages to Simon and acting as a sounding board for his theories.  Another very familiar face, Glyn Owen, appears as Superintendent Kinglake.  The Superintendent is your typical Saint police officer – irritated at the way that Simon rides roughshod over his investigation, but powerless to stop him.  Owen doesn’t have a great deal to do until the last ten minutes or so, but he’s the recipient of a few decent exasperated lines.

Michael Peake had the face of a villain, so it won’t come as a surprise to learn that today he plays … a villain (Hans Blatt).  Indeed, it always came as a slight surprise whenever Peake turned out to be playing a good guy (such as in the Doctor Who story The Romans).  Blatt begins by attempting to run Simon off the road and when that doesn’t work he slips into his hotel room to pop something unpleasant into his bottle of wine.

Later, Simon reaches for the bottle and pours out a drink for himself and his visitor, Nick Vashetti (Neil McCallum).  Just in case we’d missed the scene of Blatt’s tinkering, the incidental music goes overboard with menacing drumbeats as the pair slowly raise the glasses to their lips, just to hammer the point home.  But in the split second before they take a swig, Simon senses poison and knocks the glass out of Vashetti’s hand.  A pity that Blatt didn’t choose an odourless poison (goodness knows what they were teaching people in crime school back then).

Vashetti’s death is just a pleasure deferred for Blatt though.  Vashetti has information which will allow Simon to solve the mystery, but he doesn’t get the chance to pass it over as a visit from Blatt (complete with his trusty silenced pistol) sorts him out once and for all.  It’s a rather odd scene, as although the tension is nicely ramped up by the slow and methodical way that Blatt attaches the silencer to his gun, the mood is then dissipated by the very unconvincing “pop” it makes.  It’s such an unconvincing sound that at first I wondered if it was a fake gun (designed to frighten but not kill).

The Fellow Traveller was adapted from Charteris’ short story The Sizzling Saboteur (one of two novellas published as The Saint on Guard in 1944).  The events were relocated from wartime America to modern Britain and the death of Henry (Matson on television, Stephens in print) was much grimmer in the novella.  The Saint’s car journey is interrupted by what appears to be a log in the road – but it turns out to be Henry’s blackened, dying body.

Although The Fellow Traveller has a mystery at its heart (just who is the Mr Big running the operation?) the eventual reveal of his identity is a bit of a damp squib.  It’s also difficult to be that invested in Magda’s fate as Addam’s icy persona doesn’t help to draw the viewers in.  As ever, it’s an efficient production, but since the story never quite kicks into gear it only rates three halos out of five. 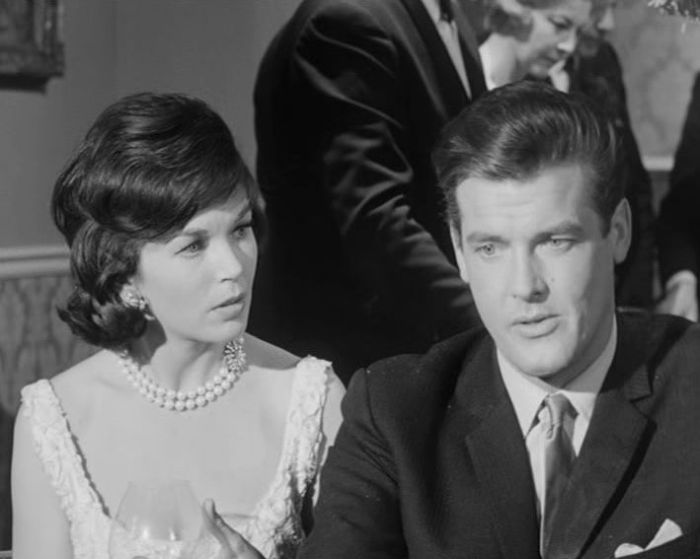