Jimmy Sharma (Saeed Jaffrey) is the owner of an Indian restaurant called The Jewel in the Crown. He’s more than a little irritated when one of his former waiters opens up a rival establishment just two doors away, but that’s not his only problem.  Jimmy has two headstrong daughters – Bubbly (Shelley King) and Asha (Rita Wolf) – and an equally headstrong mother (played by Zohra Seghal). Add in the colourful bunch of eccentrics who make up his restaurant staff and it’s clear that life at The Jewel in the Crown will rarely be straightforward.

Running for two series in the mid eighties, Tandoori Nights is an entertaining series which works on several levels. On the one hand it’s simply a funny sitcom with a wonderful central performance by Jaffrey as the slightly pompous Jimmy . But it’s also able to tackle quite heavyweight topics such as mixed-race relationships, religion and the role of Asian women in Western society in a deft and non-tokenistic way.

Tandoori Nights was created by Farrukh Dhondy, who penned all the scripts for the first series. He didn’t return for series two, which meant that a number of different writers took over the scripting duties. Two names from the roster of series two writers stand out – Meera Syal and Philip Martin.   Not long after her Tandoori Nights episodes aired, Syal would appear in Goodness Gracious Me, a programme which has long been hailed as innovative in the way that it dealt with the Asian experience in modern Britain (although it could be argued that Tandoori Nights got there first).  Philip Martin might have seemed a slightly odd choice, but he had previously penned Gangsters (1976 – 1978), a cult series with a multi-racial cast.

Rewinding back to the opening episode, it revolves around Jimmy’s attempt to treat Delia (Angela Browne) to a meal at his restaurant. He met her at the golf club, which immediately informs us that Jimmy is well integrated into British society. This is also confirmed by his mode of dress and his speech patterns, which have a certain Anglophile twang (Jaffrey did tend to make a habit of playing characters who were more British than the British themselves).

Bubbly and Asha react very differently to the news that their father plans to share a meal with a white woman. Bubbly, his older daughter and someone who works tirelessly for immigrants rights, is unconcerned, whilst Asha – still a student – is somewhat horrified.

At the same time that he’s arranging his dinner plans, Jimmy’s also trying to recruit some new staff. He’s less than impressed with his new bar hand (he’s the elderly relative of one of his other staff members). But he’s finally convinced that the man’s right for the job thanks to this following killer line. “He was a lion tamer in the circus, very good with chairs.” Wonderful stuff.

Asha and Bubbly have been invited to join their father and Delia for the meal. It’s an exercise in awkwardness as Deila is just a little too keen to embrace their culture, leading to the moment where she elects to eat her food with her fingers and they – out of a sense of politeness – reluctantly do the same. The reapparance of the rather upset Mr Gupta (Rashid Karrapiet) – previously turned down for a waiters job – doesn’t help matters, especially as Delia decides that he was treated unfairly by Jimmy.

A familar, but still amusing, storyline is played out in White Lies. Allaudin (Tariq Yunus) is a first-class chef but recently he’s not been himself. The arrival of a relative from abroad is troubling him, since back in his home village they all believe he’s a man of substance. So Jimmy, anxious not to lose him, agrees that for one night Allaudin can pretend to be the owner of The Jewel in the Crown and treat his relative to a slap up meal. It’s a delightful role-reversal played excellently by both Yunus (now the man of means) and Jaffrey (toiling away in the kitchen).

The rest of series one maintains the high standard of the opening episodes, especially Far from the Ganges. This offers a sharp chance of pace, as we move away from the restaurant to focus on Jimmy’s mother, who’s in low spirts following a tumble down the stairs. Zohra Seghal is excellent here, seemingly enjoying having a larger share of the script than usual.

The tone of series two is a little different, which isn’t surprising since it was the work of a number of different writers. The change of style is obvious right from the first episode, Bring on the Dancing Girls (w. Meera Syal) which sees more character conflict than usual in a slightly messy plot.

Syal’s second and final script, Welcome Home Sweetie, is the more satisying of her two. Jimmy’s niece Sweetie (Sneh Gupta) is making her first visit to Britain. Before we meet her, time is taken to build her up to be a demure and innocent girl – and someone who the more modern Bubbly and Asha might slightly look down upon. The reversal is obvious, but satisfying – Sweetie is even more Westernised than her British relatives and delights in the sort of behaviour that shocks the rather straight-laced Jimmy.

Both of these scripts offer Zohra Seghal some good material and it’s interesting to see echoes of this character later on in Syal’s work, most notably in The Kumars at No 42.

Overall, both series of Tandoori Nights contain sharply written scripts which still strike a chord today, some thirty years or so after their original transmission.  Saaed Jaffrey heads an impressive cast of regulars, all of whom have an opportunity to take centre-stage at least once during the twelve episodes.  And the restaurant setting allows for a regular influx of guest stars, many of whom will be familiar to those who know this era of British television well.  A spicy hidden gem, this is certainly worth checking out. 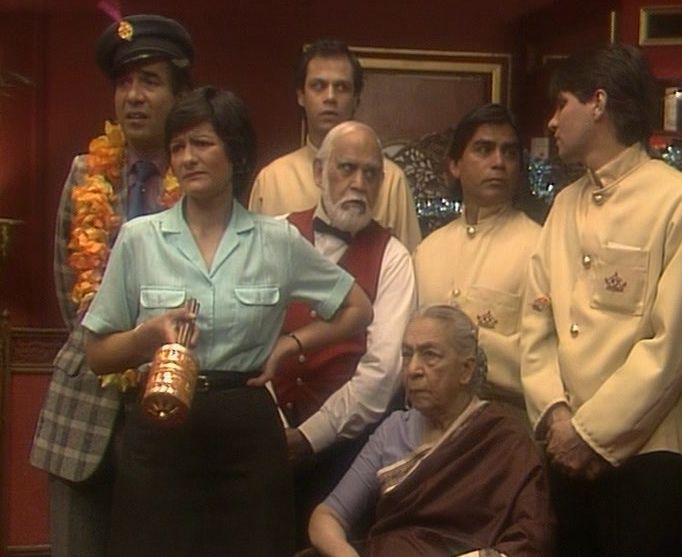