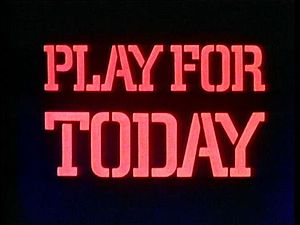 After watching A Foreign Field I wanted a little more Leo McKern, so digging out the Play for Today in which Horace Rumpole made his debut seemed a logical choice.

Rumpole of the Bailey would become a popular and long-running series, although it seems that the BBC didn’t consider that the character or concept had legs, so Play for Today producer Irene Shubik took it to Thames where it ran for seven series between 1978 and 1992.

The development of the series was still several years off when this play was made and it does seem that this was produced purely as a one-off. So although there’s plenty that’s familiar to viewers of the later series, there are also various interesting differences.

An obvious difference is that Hilda is played by Joyce Heron, rather than Peggy Thorpe-Bates or later Marion Mathie. At the end of the story she portrayed as a drunk with a strong hint that this is a regular occurrence. This is something we never see again, as the implication that Hilda drinks to drown the sorrow of her hollow life with Horace is presumably too bleak to bear repetition. Instead, whilst the Thames Hilda may sometimes bemoan her lot and life with Horace, it’s done with considerably more humour.

Horace Rumpole himself, apart from one important character beat which we’ll come to shortly, is quite recognisable as the Rumpole from the Thames series. He indulges in lengthy internal monologues as he makes his way to work and he also laments the fact that it’s impossible now to get a decent lunch anywhere. There’s only sandwiches and other convenience foods – which horrifies the traditionalist Rumpole.

“Hack? Not exactly a hack. Been at it for longer than he can remember, Rumpole has. No flies on Rumpole. Cut his teeth on Rex v Magwitch and the Penge Bungalow Murders. I could win most of my cases if it wasn’t for the clients. Clients have no tact, poor old darlings, no bloody sensitivity. They will waltz into the witness box and blurt out things that are far better left unblurted.”

Rumpole is at the Old Bailey to defend Ossie Gladstone (Herbert Norville), accused of stabbing a man outside Lords Cricket ground in a motiveless attack.  And this is where we see the major difference between the Play for Today Rumpole and the Thames Rumpole.  Here, he is very keen for Gladstone to plead guilty and even after Ossie maintains his innocence he is reluctant to consider a not guilty plea.

The Thames Rumpole never liked to plead guilty and was always ready for a fight, but maybe this Rumpole is simply more of a realist.  If the evidence is strong then what’s the point of delaying the inevitable and possibly only increasing the sentence by pleading not guilty?

Or maybe Ossie is right when he taunts Rumpole that his case isn’t sufficiently interesting and too much like hard work to fight.  This certainly seems to strike a chord with Rumpole in a way that it would be impossible to consider happening in the later series where the character was always much more straightforward.

So the decision is made to fight, although as the police have a signed confession it seems like a forlorn hope.  Rumpole spends the morning toiling away at the police evidence before the lunch-break brings a chance to grab a last chat with his son Nick (David Yelland) who is shortly due to fly to America to take a University post.

The pub lunch with Rumpole and Nick is the heart of the play, as Nick confronts his father about their strained relationship.  Nick and Rumpole both have very different views about Nick’s childhood – Rumpole remembers the good times in the holidays – teas, pantos, visits to the Old Bailey – whilst Nick remembers the long time spent at various boarding schools from the age of seven.

This is another relationship that is adjusted when the series debuted in 1978.  During the first series the chronology was rewound, so the first story was set in 1969, some five years before this one.  Therefore we get to see Nick during the time he was at school and also enjoying a much more cordial, though sometimes still distant, relationship with his father.  But even when the series reached the point where Nick departed for America it was done in a subtly different way, with much less angst and Nick never displayed the same anger again that he does here.

With lunch concluded, Rumpole is able to engineer a breakthrough when Detective Inspector Arthur (Edwin Brown) states under oath that Ossie read his statement back to him.  A simple ruse in the cells proves that Ossie can neither read or write and this revelation is enough to dent the police’s case and so the jury issue a not guilty verdict.

But here, as with some of the earliest stories in the Thames series, there’s some ambiguity.  Although Ossie has declared his innocence, Rumpole is forced to admit that he may well be guilty – there’s simply no way to be sure.  He could have admitted his guilt to the police and the confession may be geniune, but Inspector Arthur’s decision to overstate his case was enough to sow a seed of doubt in the jury’s mind.

There are other examples of this in the early Thames series, where we see that Rumpole isn’t always able to depend on the honesty of his clients.  As the series became more mainstream, this, along with the various other points discussed, were gradually smoothed away so that a more family friendly, mainstream character emerged.  The later Rumpole always pleaded not guilty, almost always won and could always rely on the honesty of his clients.  This is not to say that the later series are not well written or well acted, but they lack a little of the bite and intensity of this Play for Today and the first two Thames series.

It goes without saying that Leo McKern is excellent here, as he was throughout the series.  But as this play has more character beats he is able to instill a little more character to the part.

The closing words of the play, as Rumpole and Hilda face each other over the dinner table – “Who am I exactly?” – echo the comments of Nick at lunchtime, who tried to break the public facade of his father. At the end of the day it seems that even Horace Rumpole has his doubts.  He knows what he does, and what he does well, but has his own identity become submerged under the numerous character quirks of an Old Bailey Hack?