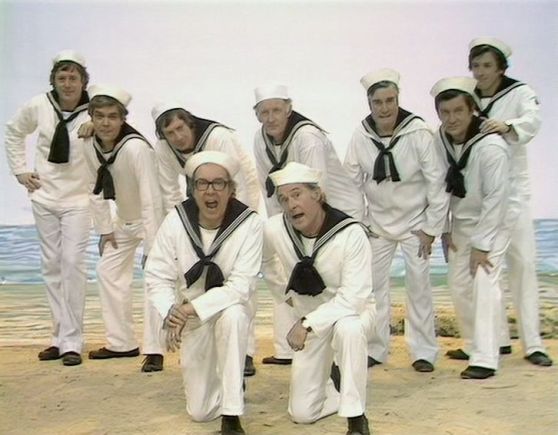 The 1977 Morecambe  and Wise Christmas show was the end of an era – their last before moving to Thames.  It’s well known that this show attracted the largest ever Christmas audience – 28 million viewers – except of course that it didn’t.  The 1977 Mike Yarwood Christmas Show (which preceded M&W) also attracted 28 million viewers – but had a slightly larger audience share – therefore it’s Yarwood who can said to be King of Christmas.

It’s slightly splitting hairs though – 28 million (at that time roughly half the population of the UK) was an incredible figure.  Yes, it was the pre-digital, pre-internet, pre-VHS age, so the choice of alternative entertainment wasn’t large, but it’s still an impressive achievement that’s unlikely ever to be matched.

What would this audience have seen?  The show opens with a Starsky and Hutch parody – Starskers and Krutch.  It’s virtually a shot-by-shot recreation of the Starsky and Hutch title sequence, which works so well due to the attention to detail.  The film work (shots of the car travelling down the street through a blizzard of paper, for example) gives it a glossy, expensive feel.

Elton John’s back – although he finds a great deal of difficulty in locating the studio.  Along the way he meets a variety of familiar faces, such as newsreader Kenneth Kendall as well as John Lawrie, John Le Mesurier and Arthur Lowe.  Quite why the three Dad’s Arny soldiers are sitting fully-dressed in a sauna is something of a mystery – and the segment seems to have been designed just so Arthur Lowe can call Elton a “stupid boy”.  It’s a nice moment though, and all of Elton’s encounters help to sell the idea that the BBC was one large entertainment factory, with stars lurking behind every corner.

Angharad Rees looks gorgeous and Eric is fulsome in his praise. “I’ll tell you something Hand Grenade. I was thrilled when I realised that you’d escaped from Colditz.”. Eventually, Ern manages to explain that Angharad was the star of Poldark and not Colditz.

Angela Rippon’s back – this time as a member of the chorus line.  They were obviously pleased with this – as it’s repeated (slightly faster each time) throughout the show.

The sense that this is the end-of-an-era is strengthened by the final BBC flat sketch.  Everything is packed up as they’re preparing to move.  But there’s still time for Eric to make some familiar digs at Ern’s expense.

ERIC: I remember the first time you ever stuck your head out this window.
ERN: When was that?
ERIC: It was blowing a gale. It blew your wig off. It landed in that garden down there. A little old lady came out and gave it a saucer of milk.

Nothing Like A Dame is one of the crown jewels from Morecambe and Wise’s BBC career.  Apart from the pleasure in seeing some familiar BBC faces, it’s mainly the excellent editing (making them appear to be responsible for incredible feats of acrobatic prowess) which is the reason why it’s so memorable.  Eric was famously sure that it wouldn’t look convincing, but it really does work well.  It must have taken some time to edit and assemble, but it’s another sign that M&W could call on all the available BBC resources.

Penelope Keith and Francis Matthews star in Cyrano de Bergerac.  Several of Keith’s Good Life co-stars make cameos (Richard Briers, Paul Eddington) and it’s an improvement over the 1976 play simply by being a little shorter.  Penelope Keith also wanted to take part in a big song and dance number – and she gets her wish, sort of.  It’s just a pity that somebody forgot to complete the staircase …..

That would appear to be the end of the show, as the credits roll.  But afterwards we see Elton John reach the studio – but he’s too late.  The show’s over, the audience has gone home and there’s only two cleaners left (played by Morecambe and Wise).  This allows us to see how tatty the audience seating was (i.e. very tatty) and it provides a somewhat melancholy ending to the show as Elton performs his song to an audience of two.  Wisely, they didn’t dub any audience reaction onto this section later.  It’s also noteworthy that Elton’s complete performance was recorded on one camera and with one take – quite impressive.

It’s an interesting ending to Morecambe and Wise’s last hurrah at the BBC.  In retrospect, the 1971 Christmas Show was by far their best (and it seems clear that the pressures of repeating that success caused some problems in the years following) but the 1977 show does run it quite close.  Morecambe and Wise would carry on, but things would never be quite the same at Christmas again.

One thought on “The Morecambe and Wise Christmas Show 1977”