Skip to content
HomeOut of the Unknown – The Midas Plague 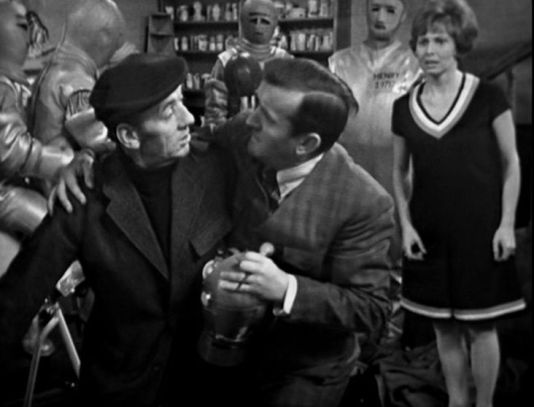 The Midas Plague depicts a society where robots are responsible for producing all the goods that the human population could ever need.  The problem is that the robots are producing them at a faster rate than they can be used, so people are trapped in an ever-increasing cycle of consumerism.

The poorer you are, the more goods you have to consume – so the larger your house is, the more cars you own, etc.  But as you move up the social scale, you are allowed to consume less – until you reach the very top where you can live a live of simplicity, unfettered by the useless trappings of society.

Morrey Anderson (Graham Stark) is a typical example of a lower-class worker.  He lives in a large house, staffed with a huge number of robots and along with his wife Edwina (Anne Lawson) they are surrounded by more furniture, food, drink and other products than they could ever hope to consume.  But he has a plan.  In his spare time he’s been working on a way to adjust his robots so that they can help consume some of the Anderson’s quota of products.  This he does – leading to the incongruous sight of drunken robots! But what will the authorities do when they find out?

The Midas Plague was written by Frederik Pohl and was originally published in 1954.  The satirical point it makes is pretty broad and this is broadened even further in Troy Kennedy-Martin’s adaptation.  Kennedy-Martin was a writer of some repute (he had already created Z Cars and would later be responsible for The Italian Job and Edge of Darkness) which does make him something of a left-field choice to adapt this type of story.

There’s plenty of humour in Kennedy-Martin’s screenplay and it’s pushed even further by director Peter Sasdy.  The opening scene has jaunty music by Max Harris which instantly tells us that this isn’t going to be the most serious of stories.  Casting Graham Stark in the lead role (already a familiar face from tv and film comedies) was another sign that this would be an episode of OOTU in a light-hearted vein.

Whilst not everything works (Harris’ music remains relentlessly jaunty, which begins to pall after a while) there’s some lovely moments of comedy which do hit the mark.  Most of these are concerned with Morrey’s robots once he’s turned them into avid consumers.  Whilst the robot costumes are pretty low-rent (intentional or budget related I wonder?) after a while that isn’t a problem and good actors like Anthony Dawes (as the most prominent robot, Henry) are able, even behind inflexible masks, to give performances of character.  I love the scene where he ambles into a bar and asks for a drink.  The robot behind the bar refuses to serve him and a fight breaks out, so Henry ends up in the dock!

Sam Kydd (as Fred) is good value as a house-breaker who doesn’t steal things, instead he’s paid by people to take their stuff and put it into other people’s homes.  John Barron (as the prime-minster, Sir John) has a small, but telling, role.

The Midas Plague is a fairly broad comedy and probably won’t be to everyone’s tastes, but there’s a lot to enjoy and it’s certainly different from the majority of the stories from the first series.

Next up – The Machine Stops 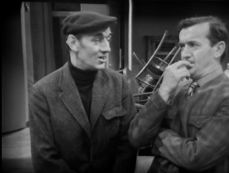