Skip to content
HomeOut of the Unknown – The Little Black Bag 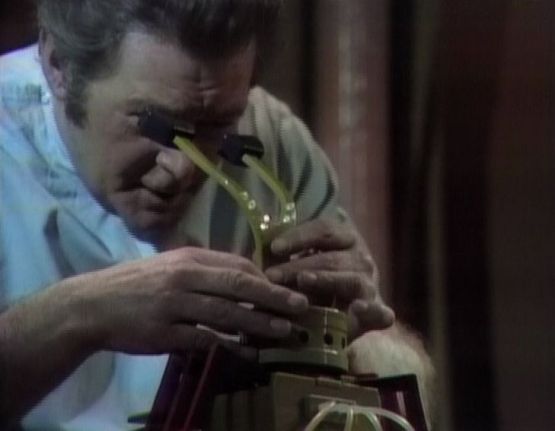 Roger Full (Emrys Jones) used to be a doctor before he was struck off for killing a patient whilst under the influence of alcohol.  He’s still an alcoholic – but when a mysterious medical kit falls into his hands, he sees it as a way to make amends for his past misdeeds.

The black bag has accidentally travelled back in time from the far future.  It’s an amazing device, able to cure any known disease.  Roger comes to believe that it should be used for the benefit of all, although his business partner Angie (Geraldine Moffat) disagrees and their argument will have consequences for both of them …..

The Little Black Bag was written by Cyril M. Kornbluth and was originally published in 1950. Approximately twenty eight minutes of footage from this episode of OOTU exist – comprising scenes 9 – 23. There are 26 scenes in total, so both the beginning and the end of the play are sadly missing.

The material missing at the start is mainly concerned with revealing how the black bag was transported back in time. Mike (James Chase) is demonstrating a time machine that he’s built to Dr Gillis (Robert Dean) and Dr Hemingway (Dennis Bowen). After Mike leaves, the two Doctors decide to test it and place their medical kit inside. The bag duly vanishes, but then they realise they can’t get it back – and neither can Mike, since the time machine only works one way.

The missing material from the start of the story isn’t summarised on the DVD, which is a bit of a shame – although it’s fairly easy to pick up the thread of the story, as there are later scenes set in the future where they discuss the bag. Instead, the DVD version opens with a drunken Full being plied with drinks by Angie, who sees him as someone who can make her very rich.

Emrys Jones and Geraldine Moffat are centre-stage in this story and both give strong performances. Jones (who had played the Master in the Doctor Who story The Mind Robber the previous year) is convincing as a man who sees the bag as a chance to make amends for his past. Moffat contrasts nicely, as his partner who is only interested in profit (humanitarian gestures aren’t really her thing).

A brief audio clip from the closing moments of the story exists and this (together with reused video clips) have been used in order to create an ending. It’s a bit abrupt, but it does give a good idea of how the story concluded.

Next Up – The Yellow Pill

One thought on “Out of the Unknown – The Little Black Bag”