Skip to content
HomeOut of the Unknown – To Lay A Ghost

After Eric and Diana Carver move into their dream house in the country, Diana (Lesley-Anne Down) feels very happy, claiming a special connection to the place.  This pleases Eric (Iain Gregory) who is well aware of his young wife’s traumatic past.  Several years earlier, when Diana was still a schoolgirl, she was raped – and the effect of this experience is still felt very strongly by her (for example, she resists any sexual advances from Eric).

But their idyllic peace is shattered when they realise that they’re not alone.  The house is also inhabited by a ghost, which seems to have a special interest in Diana.  On several occasions Eric comes close to death at the hands of Diana (under the control of the ghost).  Paranormal specialist Dr Walter Phillimore (Peter Barkworth) is intrigued by the case, but warns Eric that both he and his wife are in danger if they remain in the house …..

The first surviving episode from the fourth and final series, To Lay A Ghost was written by Michael J. Bird, later to pen acclaimed series such as The Lotus Eaters, Who Pays The Ferryman? and The Aphrodite Inheritance.  To Lay A Ghost has attracted a certain amount of notoriety over the years, and it’s not difficult to see why.

The story opens with scenes of the schoolgirl Diana being raped (although nothing graphic is seen, it’s obvious what’s happening).  Later in the story, Phillimore tells Eric that he’s been too considerate with his wife (implying that he should force himself on her).  Another implication is that the ghost (a 19th Century murderer and rapist called Thomas Hobbs) has been summoned due to Diana’s repressed desires.

This seems to be confirmed when Diana says to Eric that if he wants her to do something then he shouldn’t ask her – he should make her.  From this, Eric concludes that Diana enjoyed the rape and has subconsciously wanted it to happen again ever since.  Eric is unable to treat her roughly, so he leaves.  Diana is left alone, waiting on the bed for the ghost to appear.  Her last words are identical to those she spoke just before she was raped – which is a clear indication of what will happen to her after the credits have rolled (and explains the double-meaning of the title).

Apart from the controversial nature of the story, it’s a fairly static and underwhelming production.  The seventeen year old Lesley-Anne Down looks lovely (but is rather wooden) whilst Iain Gregory also gives a somewhat indifferent performance.  Things do pick up when Peter Barkworth appears, as he adds a touch of class to proceedings.

Whilst the ending is memorable (if somewhat questionable) the rest of the story is less engaging.  To Lay A Ghost isn’t totally without merit, but it’s certainly something that it’s difficult to imagine being broadcast on mainstream television today.

Next Up – This Body Is Mine 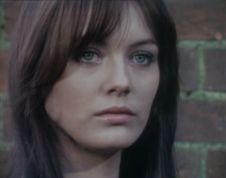