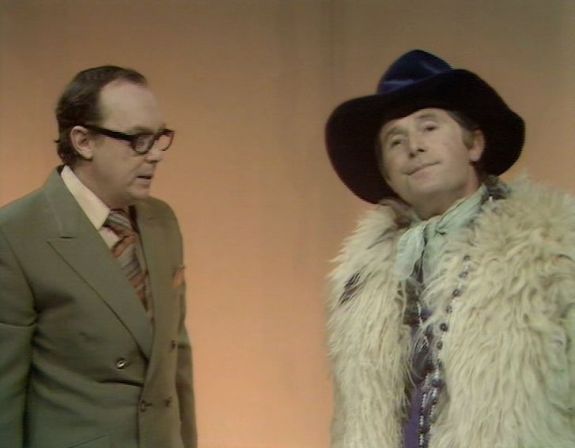 Compared to their later BBC Christmas shows, the 1969 Morecambe and Wise Christmas Show was a rather modest affair.  After reaching an early peak in 1971, they (together with writer Eddie Braben), obviously felt the need to try and make each successive Christmas show better than the last – with bigger production numbers, more impressive guests, etc.

But when the 1969 special was transmitted all this was in the future, so what we have here is basically an extended version of one of their normal shows.  There is a reason for this though – Eric was taken ill with flu during recording, so most of the programme was culled from material already taped for the upcoming series (this helps to explain why M&W don’t reference Christmas in their opening monologue).

So whilst it might be a patchwork effort, there’s still a decent roster of guests.  Fenella Fielding stars in the end play, whilst Frankie Vaughan, Nina, Sacha Distel, The Pattersons and Kenny Ball and his Jazzmen provide the music.  Five musical guests seems rather overgenerous (some are certainly better than others). For me, Nina and Kenny Ball are the pick of the musical acts.

Eddie Braben had started writing the Morecambe and Wise show in 1969, during the second series (following the departure of Sid Green and Dick Hills who had worked with M&W throughout the 1960’s up to this point).  As the second series was only four episodes long, the 1969 Christmas Show was still very early days for Braben, but many of the familiar traits were already in place.

Braben’s chief innovations were to turn Ern into a writer, giving a shape and form to the end of episode productions as well as softening the byplay between the two (the Green and Hills M&W tended to be rather more combative).

Chief pleasures in any Braben scripted M&W show always includes the opening byplay and the flat sketch.  This opening sees Ern dressed in a hip and happening way.  Since by December 1969 the Swinging Sixties had run their course, he looks even more ridiculous than if he’d been dressed that way in 1967, which I presume is part of the joke (although from the modern perspective it’s possibly not as clear).

There’s plenty of great lines here as Ern tells Eric, “A couple of nights ago, I had a happening.  I freaked out in the King’s Road.  Pow!  I went to this discotheque.  I met this dolly bird and we really moved it!”.   Whilst Ern is chuntering away, Eric remains fascinated by his coat, “Does it tug when you go past a lampost?  Now, promise me one thing, Don’t ever go to the countryside wearing that coat.  If a big lusty farmer sees you, you’ve had it.  You’ll be dipped and sheared before you know where you are”.

In the flat sketch, Ern is taking a bath and of course Eric has to interrupt.  Ern’s far from pleased (“You did this the last time I had a bath”) to which Eric replies, “You’ve got a good memory”.  Eric’s also impressed with Ern’s chest hair.  “By golly, aren’t you hairy?  That is hair, that, isn’t it?  Thick hair all over your body.  I wouldn’t have had a bath if I were you.  I would have got dry cleaned”.

Kenny Ball and his Jazzmen were a reguar feature on M&W’s shows dating back from their time at ATV earlier in the 1960’s and they’d continue to pop up during their BBC shows for a number of years.

The lovely Nina appears to sing Do You Know How Christmas Trees Are Grown? which had featured in that years James Bond film.  This begins a short-lived tradition (Shirley Bassey appeared on the 1971 M&W Christmas show to sing Diamonds are Forever).

Elsewhere, the ventriloquist dummy sketch is incredibly stupid, which probably explains why I like it so much.

Fenella Fielding is suitably alluring as Lady Hamilton playing opposite Ern (and Eric) as Lord Nelson.  The playlets always tend to drag a little (some like the John Thaw/Dennis Waterman one seems to last forever) but this isn’t too bad and at least it allows Eric the opportunity to dress up as Long John Silver.

A modest start then, but the 1970 show would see the stakes raised with a notable increase in the quality of the guest stars. 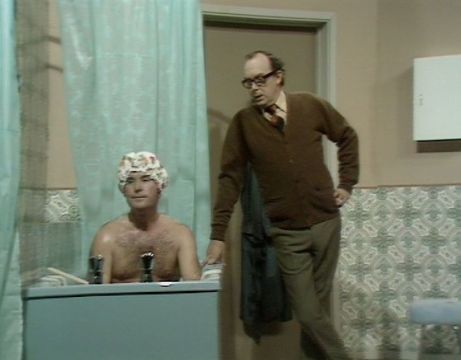 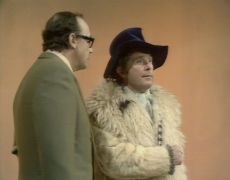 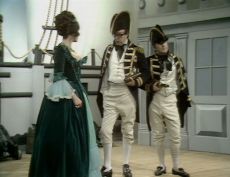 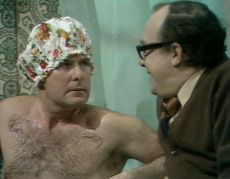 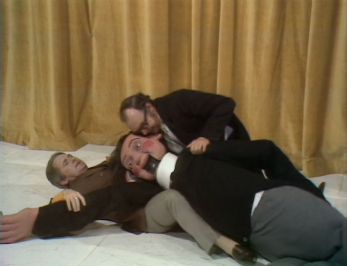 Eric struggles with his vent’s doll