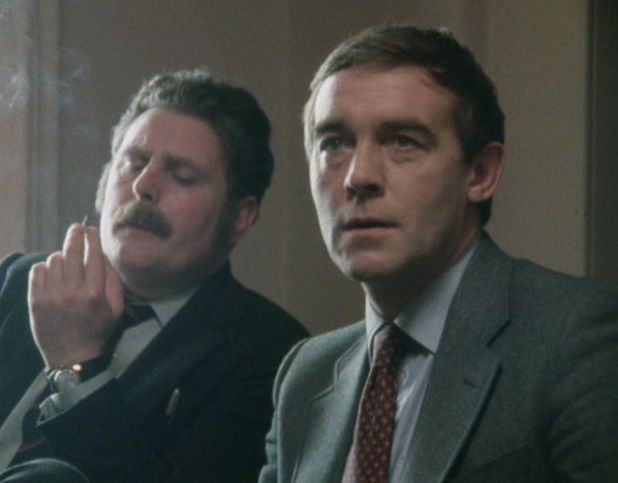 In many ways Michael Jayston is the glue that holds Tinker Tailor Soldier Spy together.  With Smiley remaining in the shadows until the end, it’s Peter Guillam who has to act as Smiley’s leg-man (for example, venturing into the Circus to obtain the information that he needs).  Guillam isn’t a showy part, but Jayston is perfect casting.  When Smiley’s People was made a few years later, Jayston presumably wasn’t available – so the role of Guillam was played by Michael Byrne.  Byrne’s a decent actor, but Jayston’s loss was keenly felt.

In episode four, Guillam is able to successfully liberate the Testify file from the Circus file-room, but his hopes for a quick getaway are scuppered when Toby Esterhase collars him in the corridor.  “Peter, I am very sorry to disturb you, but we have a crisis. Percy Alleline would like a word with you.”

Guillam finds himself confronted by the Circus’ top-men, with Alleline very much on the warpath.  He tells him he’s been seen with Ricki Tarr.  Guillam denies this and it becomes obvious that Alleline doesn’t have any proof – it’s more of a fishing exercise.  Source Merlin has divulged that Tarr’s wife and child are en-route to England, so logically Tarr must be here as well. And it’s clear that Alleline doesn’t believe Guillam’s denials.

Alleline: What the hell are you shrugging at us like that for? I’m accusing you of playing hooky behind our back with a damn defector from your own damn section, of playing damn-fool parlour games when you don’t know the stakes! And all you do is shrug at me? There’s a law, Guillam, against consorting with enemy agents! You want me to throw the book at you?

Guillam: I haven’t seen him! If anybody’s playing parlour games it’s not me, it’s you! So get off my back!

It’s another scene that throws the main suspects into sharp relief, especially Alleline, who is shown to be both patronising and condescending.  And when Guillam wonders exactly what use Tarr would be as a double-agent, Alleline can only respond with bluster.  “Well never mind what sort.  Muddying pools, poisoning wells maybe.  That damn sort.  Pulling the rug out.”

Whilst waiting for Guillam to return, Smiley and Mendel discuss him.  Mendel’s slightly concerned, since he’s heard some details about Guillam’s past operations – but Smiley remains confident in him.  It’s a scene that helps to give Peter Guillam a little more depth.

Mendel: He does sound jumpy. He might have overdone it a bit there. He was very loud. I’ve seen it all before, tough ones who crack at forty. They lock it away, pretend it isn’t happening, all of a sudden you find ’em sat in front of their desks, the tears pouring on the blotter.

Smiley: I think Peter will manage. You heard something about his murderous assignment in French North Africa, I suppose?

Smiley: Peter was over-matched, and lost. His agents were hanged. No one recovers entirely from that sort of thing. That is, I wouldn’t trust a man who did.

Later, Smiley and Guillam discuss Karla (Patrick Stewart) the man who is undoubtedly running the mole.  Smiley reveals that he met him once – in the mid 1950’s, long before Karla became the legendary figure he now is.  In the flashback scene of their meeting it’s notable that Stewart doesn’t have to utter a single word – Guinness does all the talking.

Look, I am not offering you money or hot women or fast cars, you have no use for such things. And I am not going to make any claims about the moral superiority of the West. I’m sure you can see through our values, just as I can see through yours in the East. You and I have spent our lives looking for the weaknesses in each others systems. I’m sure each of us experienced innumerable technical satisfactions in our wretched Cold War. But now your own side is going to shoot you, for nothing. For misdemeanors you have not committed, because of a power struggle within your own kind, because of someone’s suspicions or sheer incompetence.

Karla remains unmoved by Smiley’s offer and eventually returns to Moscow, where he wasn’t shot  – instead during the next few decades he was gradually able to increase his power-base.  When Guillam reflects that Karla’s fireproof, Smiley angrily responds that he’s “NOT fireproof!  Because he’s a fanatic! I may have acted like a soft dolt, the very archetype of a flabby Western liberal but I’d rather be my kind of fool than his. One day that lack of moderation will be Karla’s downfall.”

As there’s still three episodes to go, there’s a certain sense on running on the spot – but there’s still some important matters to be discussed.  The news that Irina has been executed in Moscow causes Smiley some concern.

Smiley: Ricky Tarr mustn’t know. It’s vital that he gets no wind of this! God knows what he would or would not do if he found out, and we may need to make further use of him.

Guillam: Do you really believe all that guff about Tarr being in love with her? The little homestead in the Highlands? The avenging lover, the honourable Ricky Tarr?

Smiley: He may be compelled, Peter, everyone has a loyalty somewhere. He mustn’t know.

It’s a moment that once again raises the question whether Ricky had any feelings for Irina or if he was purely interested in her for the information about the mole.  And Jim Prideaux has been tracked down (he’s teaching at a minor prep school) and it’s clear he’s somebody that Smiley needs to talk to urgently.  It’s emphasied that Prideaux and Bill Haydon were great friends.  Since this has been mentioned several times before, it’s obviously a point of some importance.