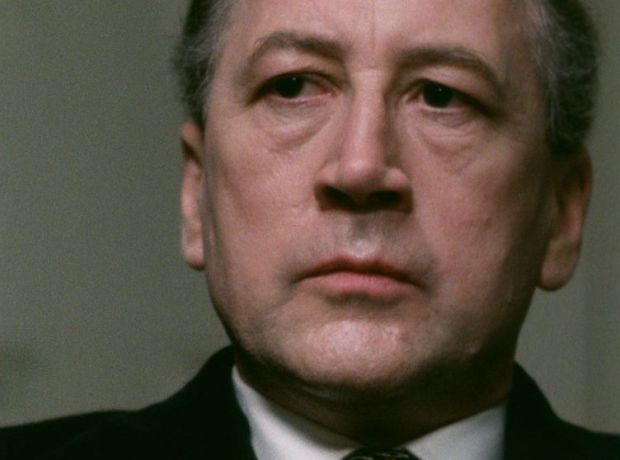 Smiley’s hunt for the mole leads him to a rather dingy London drinking club.  There he meets Jerry Westerby (Joss Ackland).  Westerby is a newspaper reporter who’s done odd jobs for the Circus in the past – such as delivering packages to dead letter drops.  “Telephone kiosk, ledge at the top, dump a little package ready for collection.”

Westerby is clearly somebody who enjoys the cloak and dagger aspect of the job, as well as the glamour of operating on the fringes of the intelligence services, though it seems that his usefulness has come to an end.  Possibly his fondness for alcohol is the reason.  “Firewater not good for braves. They think I’ll blab, crack up.”

Or it may be because of what he knows about the Jim Prideaux shooting.  Westerby was in Czechoslovakia at the time and he learnt that “the Russians moved in on Saturday, it was the day after they got Jim. Russians knew the lot, knew he was coming. They were lying in wait for him. Bad story, you see. Bad for big chief. Bad for tribe.”   When Westerby returned to England he told Toby Esterhase, but Toby professed not to believe it, dismissing it as nothing more than drunken ravings.

It’s a lovely cameo from Ackland and Guinness is his usual excellent self.  Whilst it’s clear from the outset that Westerby wouldn’t necessarily be Smiley’s first choice as a lunch companion, he’s easily able to tease the information out of the newspaper man.  As always, Smiley asks many more questions than he answers – witness the end of lunch, as Westerby wonders exactly what Smiley’s been after.  Guinness remains inscrutable, offering very little.  At one point, rather than commit himself, he smiles – and the camera remains on him as the smile slowly fades away.  Tight close-ups (switching between Ackland and Guinness) are used in this scene, very effectively.  As they finish their lunch, Westerby muses about Toby Esterhase.

If Smiley has tended to be mostly passive so far, eliciting information rather than sharing it and not expressing too many of his own opinions, that changes once he confronts Toby.  It’s the first time he’s spoken to one of the four suspects and it signals a major turning point in the story.

Toby meets Guillam at a safe house – apparently to see a potential agent – but instead he’s met by George Smiley.  Now it’s Smiley who does the majority of the talking, whilst the camera closes in on Toby’s increasingly pained face.  Guinness is, once again, excellent, as he’s able to fillet and humiliate Toby – but in the most gentlemanly way.

George Smiley: Ever bought a fake picture, Toby?
Esterhase: I sold a couple once.
Smiley: The more you pay for it, the less inclined you are to doubt its authenticity.

Eventually it becomes clear to Toby that source Merlin, and his London representative Polyakov, has deeply compromised the Circus.  He’s desperate to assure Smiley that he knew nothing about it, as well as downplaying his own involvement.

Esterhase: Why pick on the little guy? Why not pick on the big ones? Percy Allenine, Bill Haydon!
Guillam: I thought you were a big guy these days.
Smiley: You’re the perfect choice, Toby: resentful about slow promotion, sharp-witted, fond of money. With you as his agent, Polyakov has a cover story that really sits up and works. The big three give you the little sealed packets of chickenfeed, and Moscow Centre thinks you’re all theirs. The only problem arises when it turns out you’ve been handing Polyakov the crown jewels, and getting Russian chickenfeed in return. If that’s the case, Toby, you’re going to need some pretty good friends. Like us. Gerald’s a Russian mole, of course. And he’s pulled the Circus inside out.

Afterwards, Smiley commiserates with him.  “Poor Toby. Yes, I do see, what a dog’s life you must have had running between them all.”  It might be just another scene of people sat in a room talking, but in the context of the story it’s riveting stuff.  The result is that Smiley’s happy to discount Toby as a suspect, so that leaves the other three.

Now we’re into the endgame.  Toby has told Smiley about the location of the safe-house where Polyakov meets the representatives of the Circus.  In order to flush out the mole, a crisis needs to be created (so he’ll arrange a crash meeting with Polyakov).  He sends Ricki Tarr to Paris and instructs him to telex the following message back to London Station.  “Have information vital to the safeguarding of the service. Request immediate meeting. Personal.”