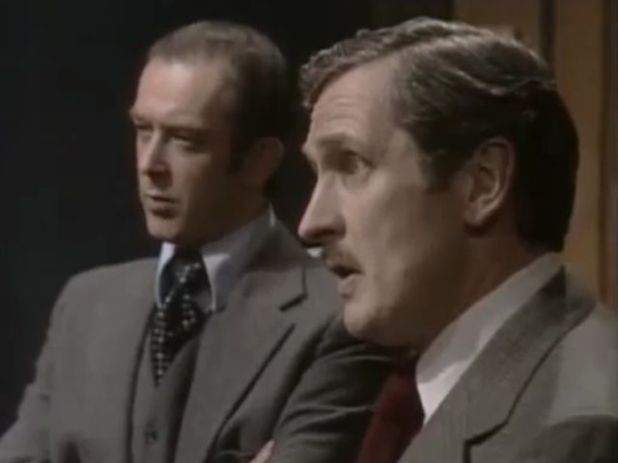 The M.O.D. are concerned about a Russian merchant vessel called the Karaganda.  They believe it may be a spy ship and want Burnside’s help to investigate it.  He considers that the Royal Marines and the S.B.S. (Special Boat Service) would be the best people for the job and refuses.  The Director General of Intelligence at the M.O.D. (Gerald James) threatens to go over his head, but Burnside, as usual, isn’t intimidated.

Back at HQ, we see Peele visit Burnside in his office.  It’s interesting to see how Caine and Burnside react.  Caine immediately stands up when Peele enters the room but Burnside doesn’t.  Since Peele outranks Burnside he should have stood up too, but he’s clearly got no time for such formalities.  He’s even less time for Peele’s request that they need to reduce the special section’s travel costs by 10%.  “If they go first class they arrive fit, if they go economy they arrive tired.  The difference could be their lives.”

Once again, Burnside ridicules Peele’s lack of operational experience.  Although Peele was the one-time head of the Hong Kong station, Burnside retorts that “the only thing you put at risk was your liver.”  This initial spat is merely the prelude for the main part of the episode, as we see Peele and Burnside once more cross swords.

Hamad (Peter Miles) is the Crown Prince of a small Middle Eastern nation.  He’s approached Wellingham and asked for his help in engineering a coup and thereby removing his father (a pro-Russian supporter) from power.  Wellingham is keen to assist, for various reasons.  “We help him get rid of his father, he turns the Sheikdom pro-West.  Buys British weapons, gets a British firm to build the new refinery.”

There’s no two ways about it – Peter Miles isn’t of Middle Eastern descent.  Sixties and Seventies television were full of British actors playing various nationalities (of varying believability) and The Sandbaggers was to be no differerent.  It’s difficult to take Peter Miles (especially when he’s slightly browned-up)  that seriously, which is a slight problem.  Also noticeable is the scene in Wellingham’s club, just after we’ve seen Hamad for the first time.  Roy Marsden’s face seems to be caked in orange make-up.  It’s very odd and doesn’t re-occur elsewhere during the story.

Anyway, back to the story.  Wellingham is keen to press ahead as quickly as possible, but Burnside is cautious.  He made his position clear in First Principles – a mission can only succeed when there’s clear and solid information.  At present, too much is unknown.  Most importantly, is it known for sure that Hamad would be sympathetic to the British government?  To overthrow a dictator and then put somebody worse in their place is far from desirable.

Burnside outlines some of the essential information he requires to Peele.  “How much support does Hamad have in the country, how well organised is it and how quickly can it be rallied?”  Burnside isn’t impressed by Peele’s statement that they should move ahead simply because Wellingham wants it to happen.  “To hell with Wellingham, he’s feathering his own nest as usual.”

In order to try and answer the question as to where Hamad’s sympathies lie, Burnside elects to find out by using Laura’s undeniable feminine charms.  But before this, they have a typically stormy meeting – Laura tells him she wants to leave the Sandbaggers at the earliest possible opportunity (mainly because he’s their boss).  Burnside responds by calling her a bitch once she’s exited the office.  Caine cheerfully tells Burnside that they’re clearly both in love with each other – they just don’t know it yet.

Laura makes an immediate impression on Hamad by rolling over her car in front of his.  They quickly begin a relationship and he seems besotted with her.  Peter Miles’ staccato delivery is oddly unnerving and the casual clothes that Hamad wears when they go bowling are interesting, shall we say.  Diane Keen does her best and it’s a memorable part of the story, but possibly not for the right reasons.

Much better is a scene between Burnside and Laura at his flat.  The fact she’s there at all is noteworthy – as you get the impression that not many people are invited around.  There’s some nice playing from both Marsden and Keen here.  Maybe Willie was right and there is a spark of attraction, but who will make the first move?

Burnside goes to make coffee and opens up a little.  “All of us have aspects of our lives with which it’s difficult to cope. In the office, I’ve learnt to survive. At home, I’m unprotected – from visitations, faces, eyes, voices.  Two more in the last few weeks.”

As the preparations for the proposed coup go ahead, Peele is dismayed to find the M.O.D. dragging their feet.  When he’s told it’s because Burnside refused to help them over the Karaganda, he promises to get it sorted, which he does – much to Burnside’s disgust.

Burnside’s slow and methodical information gathering regarding Hamad is proved to be the prudent course – eventually it’s proved that had the British intervened it would have been disastrous.  The Karaganda was discovered to have an underwater hatch as an outlet for divers, so according to Peele it’s shared honours.  “You were right about Hamad, I was right about the Karaganda.”  Burnside’s reply is cutting and it looks as if his frosty relationship with Peele isn’t going to thaw any time soon.

Always Glad To Help has some nice character touches for Burnside and an impressive car stunt (when Laura overturns her Mini in front of Hamad).  As I’ve said, Peter Miles is a bit of a weak link, but that’s more down to his miscasting then anything else.  Otherwise it’s typical Sandbaggers – the majority of the battles we see in the series aren’t fought overseas, but rather closer to home – and with words, not guns.