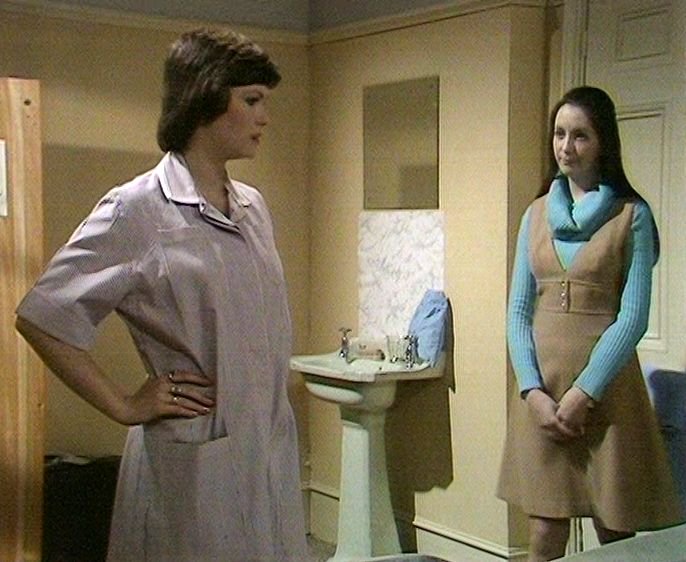 Given that the viewer is discovering St Angela’s for the first time in this debut episode, it makes dramatic sense to follow Pat and Maureen on the same journey. The differences between the two are made abundantly clear during the first few minutes – Pat comes from an affluent English family whilst Maureen hails from humbler Irish farming stock.

Pat has the air of a dilettante – she could do almost anything she wished (provided she’ll allow her indulgent father to pull a few strings) but has decided on nursing. Partly this is because she believes it might be a “laugh” although she’s also aware of both the grimmer realities and the rewarding aspects. Her father, Lawrence (Geoffrey Palmer), is exasperated by her choice, but is ultimately supportive. The conflict between the two seems mainly designed to articulate the reason for Pat’s choice (the same sort of mild familial strife applies to Maureen).

Maureen lives in the bucolic Irish countryside, but has her heart set on moving to England in order to qualify as a nurse (she could do this in Ireland, but it would be a longer process). Leaving for England is the source of divergence between Maureen and her mother (played by Ronnie Masterson). Maureen is shown in various ways to be a quieter, more repressed and innocent character than the outgoing Pat (her reluctance to take a drink, for example). This is presumably why her mother is convinced that Maureen’s sojourn in England will change and corrupt her.

Both travel to St Angela’s by themselves, although Maureen’s is obviously the longer and much more arduous journey. Another obvious difference between their mindsets can be seen after they disembark from the train on the last leg of their trip. Pat, with her natural air of authority, finds a guard to help carry her bags but Maureen is forced to struggle on alone. Pat then hops into a taxi in order to travel to St Angela’s in comfort whilst Maureen makes her way via public transport.

Once they both finally arrive, they – along with the rest of the new intake – are introduced to the intimidating Sister Broomstock (Elspeth MacNaughton) who lays down some of the groundrules. Sister Broomstock (“Broomstock not Broomstick” she helpfully tells them) is the archetypical battle-axe figure (easy to imagine Hattie Jacques in the same role). These scenes are interesting mainly for the way we learn exactly what amenities are available to the budding nurses – a shampoo and set for a handful of pennies sounds very good value ….

Their induction continues later at a slightly awkward coffee evening. There’s plenty of polite laughter as the overawed new starters begin to take stock of their surroundings and the training schedule which lies ahead of them. The number of lines on a nurses’s hat (one for a first year trainee, two for two years, three for three years, no lines for a fully qualified nurse) is another interesting little touch.

Given all we’ve seen so far, it’s fair to say that Pat and Maureen have little in common. But – partly because they’re rooming next to each other – they find a friendship developing (initiated by Pat who, as per everything else we’ve witnessed so far, is clearly the proactive one).

Whilst Maureen, Pat and the others are adjusting to their new lives, work on the wards continues. Jo Longhurst (Julie Dawn Cole) would seem to be the ideal that they’re all seeking to emulate. Endlessly patient and cheerful, she corrals her ward with good humour and understanding. Effortlessly able to bat off some of the (good natured?) sexist banter from the patients, Jo makes an immediate impression.

A solid opening episode then. True, it’s a little stilted in places but all the building blocks of the series have been put in place. We know what sort of people Pat and Maureen are, the question is how they will change and adapt once the training process begins in earnest.