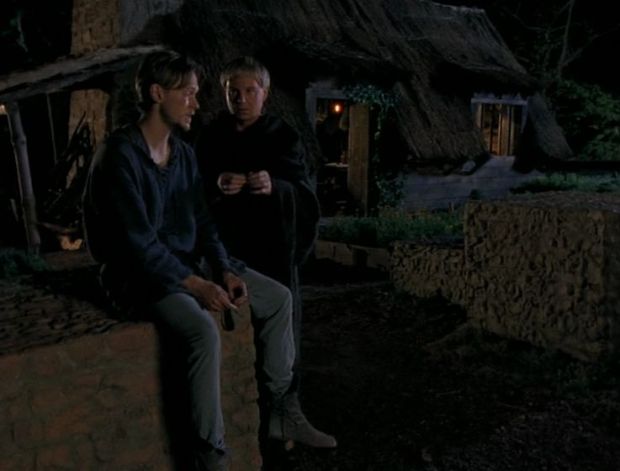 Liliwin (Steven Mackintosh) is a penniless jongleur who has been hired to perform at the wedding feast of Daniel Aurifaber (Hugh Bonneville).  When he is dismissed without payment, Liliwin leaves the house threatening vengeance.  Later, the head of the house, Master Walter (Roy Barraclough) is found unconscious and robbed.

it seems obvious that Liliwin is guilty and he’s pursued through the town by an angry mob.  He manages to reach the safety of the Abbey and once there he claims sanctuary.  He’s given into the care of Brother Cadfael, who takes an instant like to the young man.

The Sanctuary Sparrow was the seventh Chroncile of Brother Cadfael, originally published in 1983.  Like the other adaptations, it’s somewhat streamlined from the original book but it’s fairly faithful to the source material.  One slight difference is that here we see Abbot Heribert (Peter Copley) in charge, whereas in the book Abbot Radulfus leads the brothers (this was simply a consequence of the series adapting the stories out of sequence).

Copley’s terribly good at the start – in the dramatic scene where Liliwin, chased by a mob wielding flaming torches, claims sanctuary.  Even when Heribert has confirmed that Liliwin is now untouchable by the outside world for forty days, the mob still make moves to take him.  Copley (who was pushing eighty at the time) is able to impressively quell the rabble with a few choice words.

As touched upon previously, the Cadfael Chronicles more often than not feature a young man accused of the crime who Cadfael takes under his wing and eventually proves to be innocent (usually so he can marry another character featured in the story).  This one is no different and Steven Mackintosh gives a pleasing performance as the travelling player, Liliwin.  He can’t always be guaranteed to tell the truth though, and this does cause Cadfael to wonder if his trust is misplaced, but all is sorted out eventually.

His bride-to-be is one of the Aurifaber’s serving-maids, Rannilt (Sara Stephens).  Like several other actors, she was at the start of her career when she appeared here, and she’s very appealing as an innocent who finds herself in danger at the conclusion of the story.

Another actor making an early screen appearance is Hugh Bonneville (credited as Richard Bonneville).  With long hair and a beard, he’s pretty unrecongnisable and, to be honest, it’s something of a ripe turn.  His character, Daniel, is rather a boor and a rake (bedding every available woman in town, even though he’s a newly married man) and it’s not the most nuanced or convincing of performances, shall we say.

Much better is Fiona Gillies as Susanna Aurifaber.  Susanna has run the household for several years, but now finds herself displaced by Daniel’s new wife.  Gillies displays a calm control to begin with, but as events begin to spiral out of control she is able bring more of Susanna’s true nature to the fore.

All in all, this is impeccably cast (with more good performances from the likes of Rosalie Crutchley as the grand-dame of the household and Roy Barraclough as her money-obsessed son).  As ever, Jacobi is the glue that holds it all together – and we see Cadfael in full investigative mode (making deductions from the smallest traces).