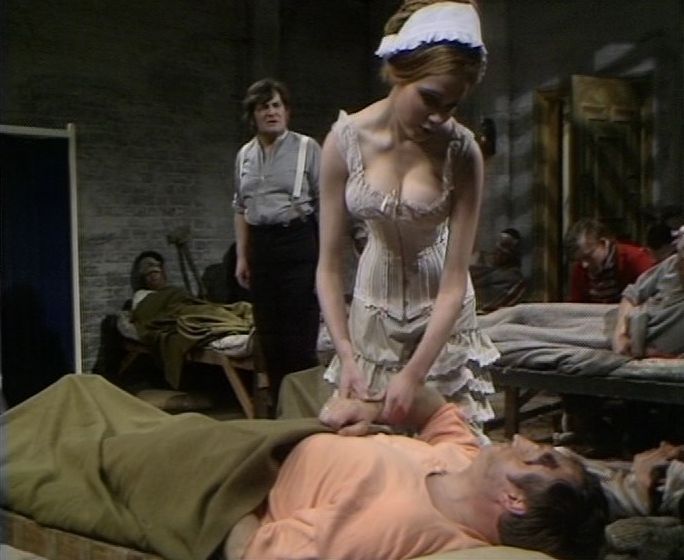 Notes: The party sketch is a fancy dress affair, with Ronnie C making a very fetching Nell Gwynne, complete with copious oranges. His appearance certainly tickles the studio audience, leading to a round of applause. Ronnie B has apparently come as Richard the Lionheart, although he doesn’t quite look the part in a lounge suit (but apparently that’s what Richard wore when he wanted to relax).

Tina Charles tackles Laura Nyro’s Stoney End, which had been a hit for Barbra Streisand in early 1971, whilst New World offer rather soporific fare with Delia.

Ronnie B is Lionel Smart, who demonstrates Smart Cooking (this week bourguinon a la pouf celebre). That Smart is a grubby common type is the joke, of course.

Hampton Wick continues, with Madeline Smith’s winsome heroine now ensconced in the Crimea, tending to the wounded. She has to make the ultimate sacrifice (her clothes for bandages) which certainly seems to bring a smile to the faces of the patients (and no doubt warmed the hearts of some of the viewers at home too).

Joe Andy balances swords on his chin and attempts to climb a ladder at the same time. Oddly, he doesn’t receive an introduction (not even an onscreen caption). As impressive as his feats are, what’s more interesting is that as he slowly climbs the ladder you can see the studio lights, transmission sign and the clock – which tells you exactly what time this was recorded. Well it interested me anyway.

Up next is a sketch with Ronnie B as a vicar attempting to marry Ronnie C and Josephine Tewson. If they all didn’t have various ailments (hiccups, sneezing fits) then no doubt things would be a lot easier. This is one of those sketches where because the joke is obvious straight away, the question is whether things will get more or less funny when the gag gets repeated numerous times.

No musical item in this one, so the marriage sketch leads into the closing items.