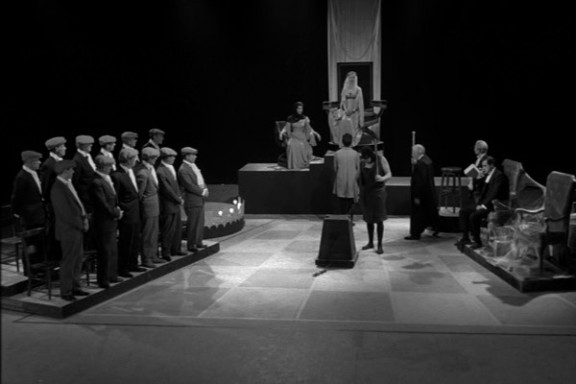 Gurney Slade is on trial.  “I did a television show recently and they didn’t think it was very funny.  I’m being charged with having no sense of humour.”  Given that by this time the series had been moved to a late-night slot (due to an alarming slump in viewing figures between the first and second episodes) this was a canny piece of prediction by Green, Hills and Newley.

Unlike the first three episodes, which were location based, this is shot entirely in the studio – which means that visually it obviously feels very different.  The courtroom set is quite basic – black drapes form the background, for example (giving a theatrical feel to proceedings).

When Gurney learns that the judge is the fairy-tale figure Princess Eleanor (who’s never laughed) he knows he’s got his work cut out.  Can he rely on his defending counsel, Archie?  Archie is a old-style music-hall comedian – modelled on the likes of Max Miller.  Possibly there’s something of Archie Rice (from John Osborne’s 1957 play, The Entertainer) in his style as well.  He offers a series of painfully unfunny jokes as part of Gurney’s defence, which makes Gurney believe he’d be better off defending himself.

The prosecuting counsel (a typically effective turn from Douglas Wilmer) is convinced of Gurney’s guilt and attempts to prove it by showing the jury a clip from one of his previous shows.  This is another self-reflective moment, as the clip is new – though it could have easily featured in one of the previous episodes.  We see Gurney sitting on a bus, musing about an advertisement showing a man who appears to be delighted about a new countersunk screw.

There then follows a series of arguments and counter-arguments about whether countersunk screws are funny or not.  An average family (the ones we saw in episode two) are called to the witness box.  The father says that the clip was clever.  Not funny, but clever.  The mother was less impressed.  “I didn’t understand what it was all about. Besides that, I don’t think it ought to be allowed. Bad for kids.”  As it turns out, that possibly wasn’t too far removed from the actual response of a good proportion of the audience.

With the jury being made up of twelve men dressed identically (in cloth caps and scarfs) it’s possible to sense a little contempt for the viewing audience.  This is a potentially difficult line to tread, but they seem to have got away with it (possibly because by this time, the people left watching had invested in the programme and its worldview).

Gurney interacts briefly with the jury – and they appear not to realise that he’s the one on trial.  When the foreman asks for a show of hands, Gurney is the only one who says not guilty.  He suggests they talk about it for a while (a clear nod to Twelve Angry Men).

If television is the main target in this episode, then the press aren’t immune either.  Before the jury come back with their verdict, Gurney is offered twenty thousand pounds for his life story.  He refuses, so the press turn to Leolia Plinge (“I will reveal everything.  I first met Gurney Slade at a beauty competition at Tufnell Park.”)

Gurney is found guilty – but he’s unable to be executed due to a problem with the axe.  It needs a countersunk screw to repair it, which makes the Princess laugh (and thereby gets Gurney off the hook).  It’s an ironic ending to an episode that, whilst it’s concerned with humour, isn’t particularly funny.

That’s not a criticism though.  There’s few laughs here, but it does have plenty of well-timed swipes at television makers, audiences, advertising and the media.  The stark setting and the minimal use of music helps to create a sense of tension and unease – which is unusual for a programme that’s supposed to be a comedy.  But by now it should be clear that Gurney Slade is a very unusual programme.