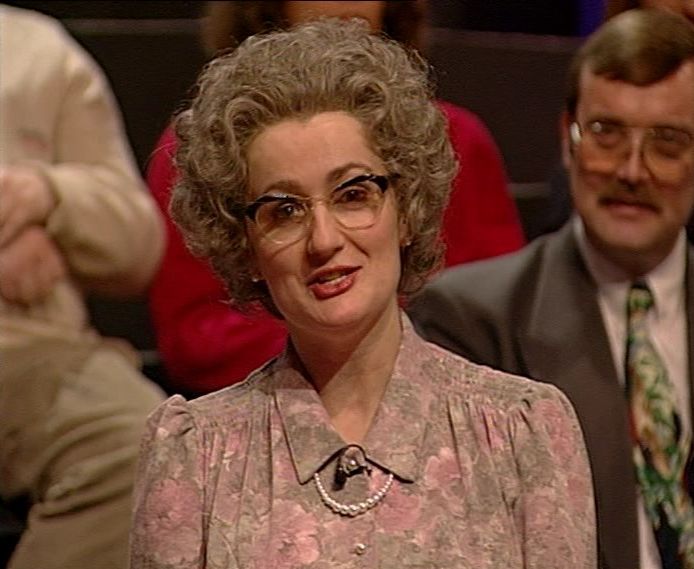 Mrs Merton made her first television appearance on Anthony H. Wilson’s gameshow Remote Control back in 1991.  Caroline Aherne clearly felt that the character had potential, although it took several pilot programmes before Mrs M landed herself a full series.

The first pilot from early 1991 wasn’t broadcast (since there was no studio audience it seems to have been produced simply as a test production).  The second pilot was broadcast on the 5th of December 1993 and was followed by a series in 1995.

From the original pilot, the format was firmly in place.  Mrs Merton was a sweet-looking elderly lady (albeit played by thirtysomething Aherne) who took advantage of her unprepossessing appearance to ask the questions that no other chat show host (apart from maybe Dame Edna) would dare to.

Mrs Merton set out her stall in the first very episode of series one, by asking Debbie McGee “what first attracted you to the millionaire Paul Daniels?”.  Voted the second best TV one-liner of all time, it gave her guests an early idea about what to expect if they ventured onto her sofa.  This didn’t deter them though, as across five series (including a trip to America) she netted a wide cross-section of stars.

Today, some are still very much in the public eye, some (like Aherne herself) are sadly no longer with us, some are forgotten, whilst a few (Dave Lee Travis and Fred Talbot from the first series, for example) are very much persona non grata.  Indeed, Travis’ Mrs Merton appearance continues to haunt him.

Another feature of the series is the audience of regular faces, all arranged behind Mrs Merton and the sofa.  Many of them would feature regularly (“let’s have a heated debate”) and the guest-list was cut from three to two from the third series onwards partly to accommodate more chat between Mrs Merton and the (genuine) octogenarians in the audience.

Dave Gorman was one of the series writers and on his website he briefly described how the show worked.

From 1994 to 1997 I was one of the four writers on The Mrs Merton Show. What a ridiculously giddy time that was. The show moved from a late night BBC2 slot to being a big award winning BBC1 show. The gold-standard lines that people still quote were almost always written by Caroline Aherne herself. Looking back on the situation I reckon I was a very lucky 23 year old. A brilliant way to learn a lot about writing. It’s sometimes described as a “spoof chat show” but it was no such thing. It was a real chat show with a spoof host. The team won BAFTAs two years running. Best Entertainment Series in 1996 and Best Chat Show in 1997.

The best encounters are those where there’s some give and take between Mrs Merton and the guest.  If her baiting is simply too merciless then it becomes monotonous.  And although all of Mrs Merton’s barbed questions were firmly scripted beforehand, her victim’s replies weren’t – so Aherne had to be adept at ad-libbing.

There’s some very entertaining encounters during the first series.  Kriss Akabusi hardly lets her get a word in edgeways, but his steam-rolling approach makes for wonderful television.  She does have the odd incisive question though, such as “do you have to plan your tactics before the race or do you just try and run faster than the other blokes?”

Mrs Merton’s encounter with Steve Coogan is great fun.  Pressed to deliver some impressions, such as Frank Spencer, he gamely agrees and also has time to discuss how a series with a fictional chat-show host is a good idea (Knowing Me, Knowing You had just finished airing).

Equally as good value is Cynthia Payne, whilst others (such as Mandy Smith) are less satisfying, mainly because Smith is never really able to give as good as she gets, so it ends up as something of a one-sided affair.  Mrs Merton’s encounter with Mary Whitehouse is also a disappointment.  On paper it sounds like a great idea, but Whitehouse (clearly not in the best of health, since the interview was recorded at her home) seems rather disconnected from proceedings.  The whole interview seems to have been set-up so that Aherne can deliver this final one-liner.  “When you retire, do you think they’ll put up a statue of you? If they do, it would be the first erection you’ve not complained about, wouldn’t it, Mary?”  There’s little reaction from Whitehouse, except that she seems to regard the comment as a flattering one.  So either Mary still had the driest of dry wit or we’ve just witnessed a rather cruel taunting of an elderly lady.

This was very much the exception though as most of the other interviews are much jollier.  As I’ve said, they’re not all hits, but there’s still a very decent strike rate.  It was certainly good enough for a second series to be swiftly commissioned, which would see Mrs Merton have some of her most memorable encounters (Jo Brand, Chris Eubank, George Best, Germaine Greer and Des Lynham, amongst others).