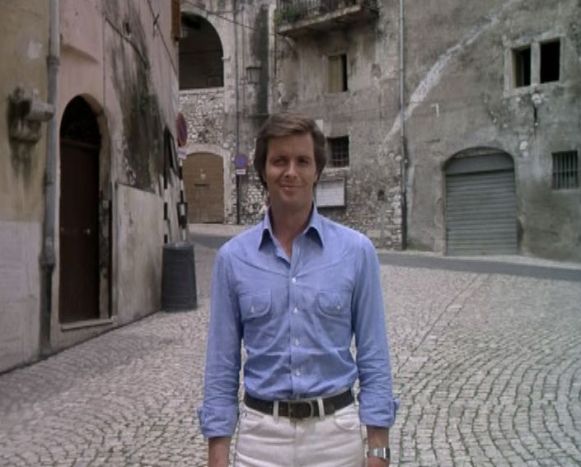 Simon is travelling through a remote area of Italy when he witnesses a murder – he sees a woman thrown off a cliff by two men.  When Simon reaches her, she’s mortally injured but manages to tell him to “warn Vincenzo” before she dies.

Father Vincenzo (Tony Calvin) is the priest of the local village, Santa Maria.  When Simon makes his way there, he discovers that Father Vincenzo is away and that nobody else is interested in offering assistance (including the police).  There’s a sinister menace that seems to hang over the town.  What is the secret that binds everybody together and how is it connected to the patrone of the village, Prince Lorenzo Castracano (Maurice Denham)?

As with Duel in Venice, part of the success of the The Village that Sold Its Soul is down to the location. Filming took place mostly in Sermoneta, a hill town in the province of Latina.  Thanks to its twisting streets, it was a location that offered director Leslie Norman plenty of scope for interesting and atmospheric shots.

It’s also an unusual episode since Simon has to mostly operate on his own.  Often, he’s paired up with an attractive female and can also count on official or semi-official help from his friends in high places.  But as Santa Maria is an isolated village there’s no help for him to call on.  There is an attractive female, Sophia Castracano (Katia Christine), but she’s a relatively minor character.

It’s a solid production, although there are a few mis-steps.  The body thrown off the cliff in the pre-credits sequence is clearly a dummy and later we see Simon desperately running away from an out-of-control cart.  But even if it had hit him, it’s difficult to imagine it causing him much of an injury!

The concept of a whole village that’s complicit in a series of murders is an intriguing one (although it maybe owes something to The Avengers episode Murdersville).  Maurice Denham adds a touch of class as the Prince and it eventually becomes clear that he holds the key to the mystery.

Because of the location and Maurice Denham, as well as a solid script from John Goldsmith, The Village That Sold Its Soul rates four halos out of five.